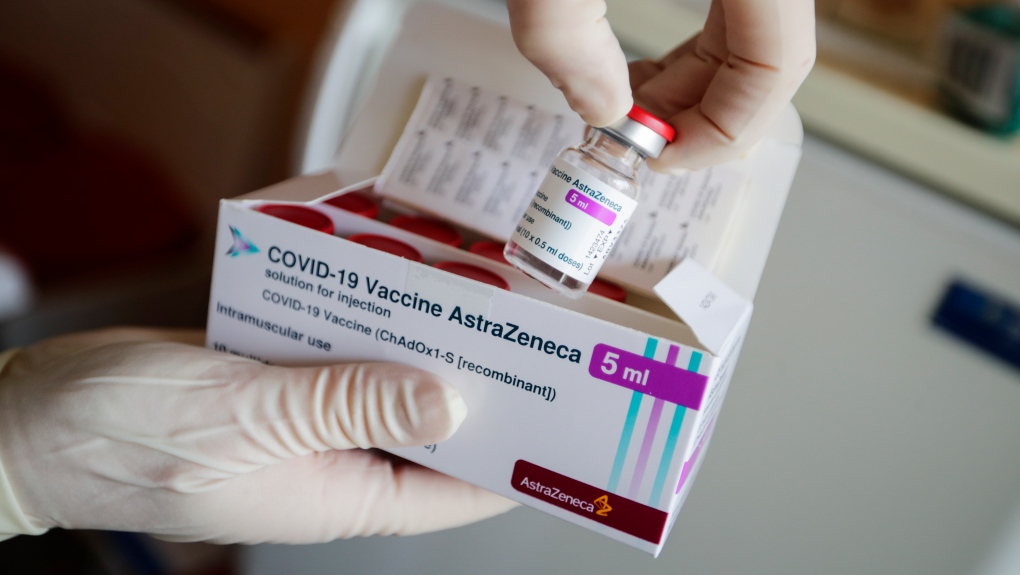 A package of the AstraZeneca COVID-19 vaccine is shown in Senftenberg, Germany, Wednesday, March 3, 2021. (Hannibal Hanschke/Pool via AP)

WINNIPEG -- Despite concerns overseas over potential adverse side effects linked to the Oxford-AstraZeneca COVID-19 vaccine, Manitoba-based virologists say the province shouldn’t suspend using the product in its vaccine rollout.

“These acute short-term effects we see are relatively common with new drugs and with almost any type of vaccine,” said Peter Pelka, associate professor at the University of Manitoba’s department of medical microbiology, “It’s all about the frequency and the number.”

Worries over the AstraZeneca vaccine stem from Denmark, where individuals inoculated with the vaccine developed blood clots. One is reported to have died.

The Danish Health Authority has now paused use of the AstraZeneca vaccine as investigations continue.

Norway and Iceland took similar steps and suspended the vaccine’s use.

Only yesterday the province’s vaccine task force unveiled details on its plan to roll out the AstraZeneca vaccine to be administered in pharmacies and clinics for eligible Manitobans.

Pelka says that plan should stay on track and it’s unlikely the viral vector used in the AstraZeneca vaccine is the cause for reported adverse side effects.

“If there’s increased reports then I think we would need to start to worry,” said Pelka. “But for now it’s something to watch for.”

“I would monitor the situation in Europe and see if there are (similar) reports from other countries.”

That’s essentially what the province says it is doing.

“We are working with Health Canada and the Public Health Agency of Canada to assess the situation in Europe," reads a statement from the province sent to CTV News.

"Canada is currently using the COVISHIELD product which is produced in a different factory from the product that is being halted in Europe.”

Canada’s first 500,000 doses of the vaccine, the aforementioned “COVIDSHIELD product,” were made in India.

Even the reported risk of adverse side effects is quite low, says virologist and University of Manitoba professor Kevin Coombs.

Given available data, Coombs estimates the risk being only 0.01 per cent, compared to current COVID-19 fatality rate of about two per cent.

“In other words, getting the vaccine is still hundreds of times safer than any adverse side effects that might occur,” said Coombs.

Coombs agrees the situation in Europe should be monitored but it shouldn’t keep Manitobans from getting the AstraZeneca vaccine if it’s available.

“It comes back… to comparing the relative dangers of either getting infected versus the much lower chance of an adverse effect what is a relatively safe vaccine,” said Coombs.