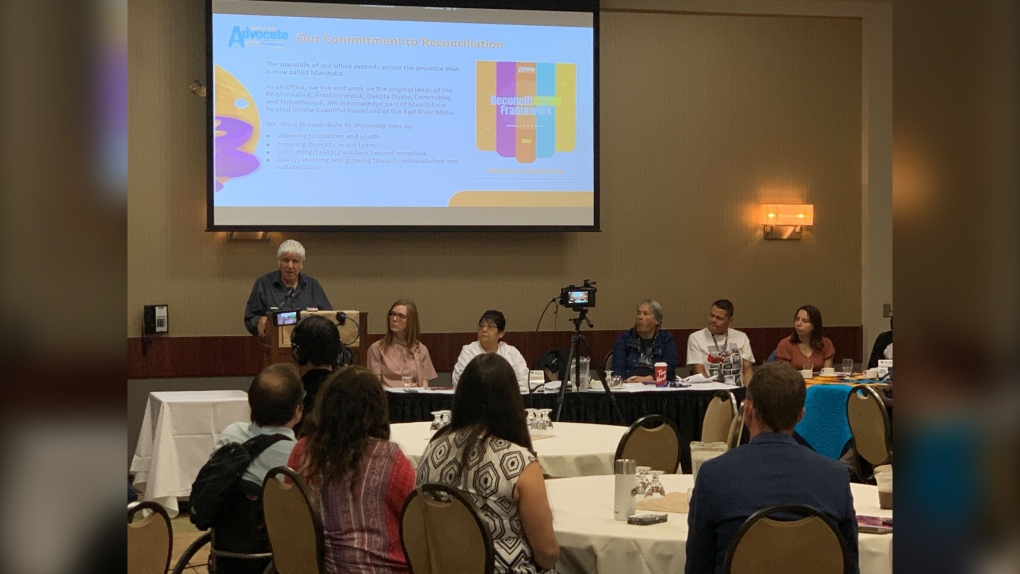 The Manitoba Advocate for Children and Youth releases a report into the effects of witnessing intimate partner violence on children on June 22, 2022 (CTV News Photo Jamie Dowsett)

A new report on intimate partner violence is shining a light on a hidden epidemic among Manitoba kids.

The Manitoba Advocate for Children Youth found once every two hours a child in this province is exposed to violence.

In the majority of cases, they’re not getting help after being traumatized.

Ainsley Krone, the acting Manitoba Advocate, said her office examined one month of data from April 2019 and followed kids through the system after they witnessed intimate partner violence.

The advocate called the findings “deeply concerning” because in many cases, the needs and rights of children aren’t being met.

For Trevor Merasty, 23, the issue of witnessing intimate partner violence (referred to in the report as IVP) is a personal one.

“I am also a victim of IVP so this really does affect me,” Merasty said in an interview Wednesday following the release of the report. “I’ve had friends who are also victims.”

The advocate’s office examined all police-reported incidents of intimate partner violence in Manitoba for April 2019. It initially wanted to look at a whole year’s worth of data, but Krone said there were just too many incidents and neither her office nor police had the resources to compile and comb through all the information.

In the report released Wednesday, hailed as the first of its kind, the advocate found in 1,943 incidents there were children present in 18 per cent, or 342 cases. A total of 671 kids were affected; some witnessed more than one incident that month.

“The numbers really should be a wake-up call for all of us that even though we know that it’s happening…the numbers are very clear that it is a significant issue,” Krone said.

Research cited in the report said witnessing intimate partner violence can lead to cognitive and emotional impacts and behavioural problems in children. It can also translate into trouble in school, involvement in the justice system and intergenerational violence in relationships the children have as youth or adults.

“Our concern is not only that it’s happening, but the short and long-term impacts of that and how that changes peoples’ perspective of what healthy relationships are and what is normal inside of a family home,” Krone said.

Of the nearly 700 Manitoba children impacted in April 2019, 82 per cent were Indigenous.

Bill Ballantyne of Brokenhead Ojibway Nation, who serves on the advocate’s elders council, said that it is because of historical trauma.

“It is not our people that are violent, that comes from residential schools,” Ballantyne said. “I’m not making excuses for those people…but to understand where they’re coming from.”

The report also looked at what supports were received after witnessing violence.

For 36 per cent of children impacted, there was no referral to Victim Services or Child and Family Services by police.

Even if they were referred, there was no documentation of services to 416 or 58 per cent of children from either agency and if there was, Krone said it rarely included direct supports to the children. Instead, it focused on the adults.

“Which is really important but it’s not a zero-sum game,” Krone said. “Just because we’re providing services to the adults it doesn’t take away from that if we also now build up the infrastructure for the children.”

She’s making seven recommendations to the Manitoba government, including more mental health and trauma care for children because the response sometimes falls outside the mandate of Victim Services, child welfare and police.

“There’s no supports really for us, so it’s really hard for us growing up,” he said. “Seeing now there are more resources that are coming out, it really moves me because we needed that a long time ago.”

According to the report, CFS is automatically contacted by most police forces outside the city when they are called to cases of intimate partner violence.

The advocate said one exception is the Winnipeg Police Service. The report said its officers only contact the child welfare system if a child is in immediate danger or if charges are laid.

The advocate said the report and seven recommendations have been delivered to the Stefansson government.

A government spokesperson said the findings and recommendations are being reviewed in greater detail.

“We continue to work together to help children and families in Manitoba,” the spokesperson said in an email.

The complete report can be read here.