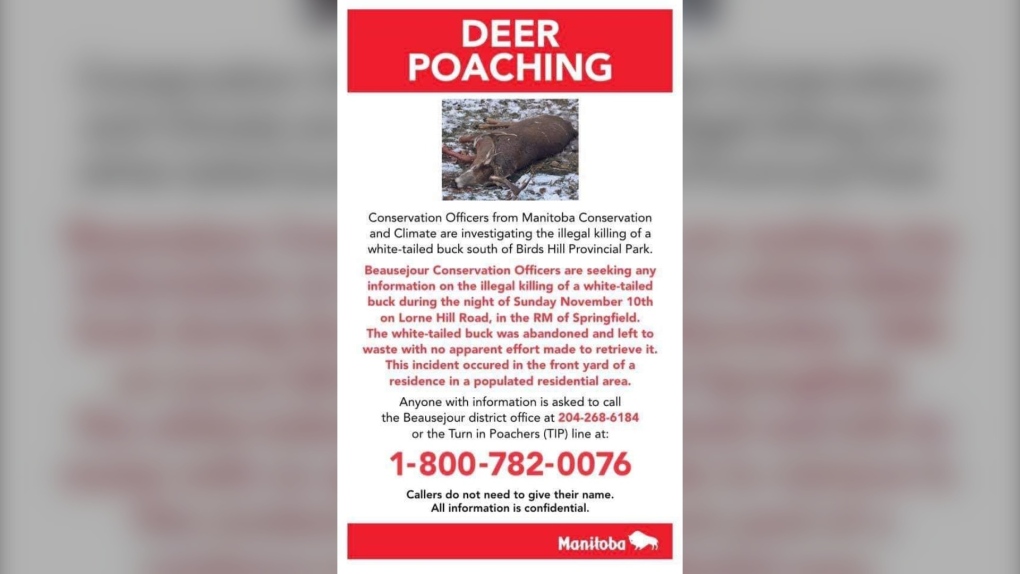 WINNIPEG -- Manitoba Conservation is searching for deer poachers, after a buck was illegally shot in the front yard of a Springfield, Man. home last weekend.

But for a woman who was home when suspects allegedly drove on her land and began shooting -- the problem is not about poaching, it’s safety.

The incident happened in the evening of Nov. 10, sometime after 7 p.m. Nicole Williamson said she was in her home on Lorne Hill Road when she heard gunshots close to her house.

“They just got out and started shooting, like they could have killed anybody,” Williamson told CTV News. “They shot right by our kitchen window and shot towards the direction of our neighbor's house.”

The next morning, Williamson said her brother found the buck dead near their property.

“There was blood everywhere,” Williamson said, adding she found shotgun shell casings on her property.

Manitoba Conservation and Climate is investigating the incident. It’s been circulating a poster about the illegal killing.

“The white-tailed buck was abandoned and left to waste with no apparent effort made to retrieve it,” the poster reads. “This incident occurred in the front yard of a residence in a populated residential area.”

Williamson said the incident has shaken her sense of safety in her community.

She said when she realized that somebody was outside of her house shooting, she wished she was in the city -- where she may have felt safer.

“Because at least when there's shots in the city, police come instantly,” Williamson said.

While Williamson said she has been impressed with Manitoba Conservation’s quick response, she feels they missed the point.

“This isn't like a hunting gone wrong,” Williamson said. “It’s about (people) driving around shooting things.”

Williamson said she hopes the people will be caught, and the entire incident will bring more attention to the problem of people “completely disregarding people’s safety.”