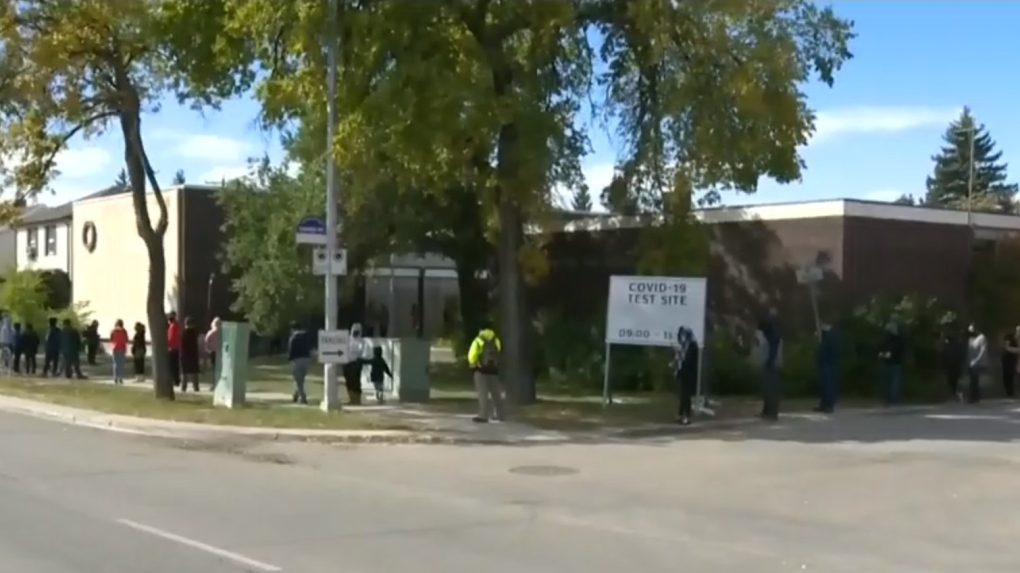 Dozens of people lined up outside a testing site in Winnipeg.

WINNIPEG -- With long line ups and wait times common at many COVID-19 testing sites in Manitoba, the province says it has contracted Dynacare to open more sites and provide an additional 1,400 tests per day.

In its daily COVID-19 bulletin on Tuesday, the province announced it is contracting Dynacare to open and operate several COVID-19 specimen collection sites in Manitoba, which will allow for an additional 1,400 tests per day, with the ability to increase to 2,600 more.

It said Dynacare is also beginning to recruit staff for a mobile collection site which will open as early as Sept. 28 in Winnipeg. The province said more drive-thru testing sites will also be opened in Winnipeg, Brandon, Winkler, Portage la Prairie, and Dauphin in the coming weeks, adding additional information will be available as sites open.

"We will be announcing the locations, hours and additional details related to these COVID-19 assessment centres as soon as possible – and we look forward to working closely with our provincial stakeholders on innovative solutions to making COVID-19 collection convenient and accessible for Manitobans," a spokesperson for Dynacare told CTV News in a written statement.

They said Dynacare will be opening and operating several COVID-19 assessment sites, which will include walk-in sites, drive-thru sites and mobile collection vehicles.

In April, Manitoba Premier Brian Pallister said the province was planning to triple its testing capacity by the end of summer.

But as CTV News previously reported, testing sites in Winnipeg had been reaching capacity at least an hour before their closure for several days in a row last week.

Wab Kinew, the leader of the Manitoba NDP said the province should have been working to increase capacity earlier in the summer.

"I've got a lot of sympathy for the average parent or family member who waits in line for five hours and then has to wait at home in a very disruptive way for five days to get the results," Kinew told media on Tuesday.

"Because of all the work that Manitobans did to flatten the curve earlier in the pandemic, we should have been in a better position now. We shut down our entire economy earlier this year, to buy this government time to do things like expand testing capacity and expand the contact tracing capacity"

The province said 1,205 tests were completed on Monday.

When asked for comment, a spokesperson for Manitoba's Health Minister referred CTV News back to the province's daily COVID-19 bulletin.

-with files from CTV's Charles Lefebvre and Kayla Rosen