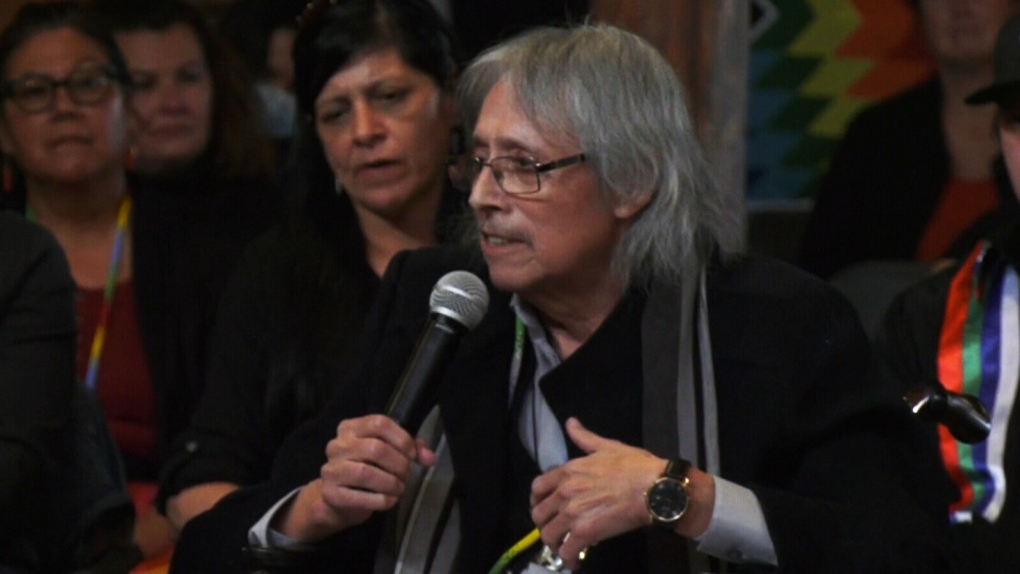 Dave Courchene is honoured during a special ceremony in November 2021. Courchene, a Manitoba elder who founded an internationally-recognized centre that shares Indigenous knowledge and teachings, has died at age 71. (CTV News Winnipeg)
WINNIPEG -

A Manitoba elder who founded an internationally recognized centre that shares Indigenous knowledge and teachings died Wednesday at age 71.

The Turtle Lodge Centre of Excellence in Indigenous Education and Wellnesssaid in a social media post that Dave Courchene Jr. had "begun his journey into the Spirit world."

Courchene Jr. was also known by his spirit names Nitamabit and Nii Gaani Aki Inini, which translate to "The Original Way; One who Sits in Front and Leading Earth Man."

The post said he died peacefully at his home on the Sagkeeng First Nation surrounded by his children and grandchildren.

Courchene founded the lodge at Sagkeeng in southern Manitoba in 2002 as a gathering place to exchange intergenerational knowledge, revitalize language, train youth leaders and find environmental solutions to climate change.

The centre says on its website that the Anishinaabe elder shared the stage with other spiritual leaders over the years, including the Dalai Lama.

Courchene was born to a family of leaders.

His father, David Courchene Sr., also became chief and in the 1960s was grand chief and co-founder of the Manitoba Indian Brotherhood, which led to the formation of the advocacy group Assembly of Manitoba Chiefs in 1988.

The assembly said Courchene will be remembered for his lifelong work in revitalizing First Nations jurisdiction.

"Your legacy will be strongly reflected in the ongoing (Assembly of Manitoba Chiefs) mandate to protecting and promoting First Nations' rights; and in all the teachings, sacred laws, and language and cultural resources that are housed at the Turtle Lodge," Grand Chief Arlen Dumas said in a statement.

Cindy Woodhouse, a regional chief with the Assembly of First Nations, said she's honoured to have been on the receiving end of what she called Courchene's profound spiritual teachings.

"Elder Dr. Courchene has been a bridge to working with the Assembly of First Nations, Indigenous Nations around the world, and a protector and advocate for the environment and culture knowledge-keeper from whom we as First Nations peoples across the country have all sought guidance," she said in a statement.

Courchene was recognized at a special event to honour his work last month. Gov. Gen. Mary May Simon thanked him for his determination, wisdom and perseverance in protecting Indigenous knowledge and the environment.

"Your vision and commitments to respect and protect our lands and waters grows more critical with each sunset," Simon said in a video statement recorded at Rideau Hall.

"Your work and the teachings and the values you have given us are more and more being heard and heeded."

At the same event, environmental activist David Suzuki said Courchene taught him about having respect for Mother Earth and the natural law.

Courchene was predeceased by his wife, Orianna Courchene, who died in February 2020.

The lodge says a ceremony and feast are to be held at the centre on Sunday.

This report by The Canadian Press was first published Dec. 8, 2021.

Ontario announced it will allow indoor dining, gyms to reopen and will increase gathering limits on Jan. 31 as part of three-step plan to ease COVID-19 restrictions in the province.

A group of some of the world’s wealthiest individuals – including five Canadians – have signed onto an open letter calling on the richest among them to pay their fair share in taxes.