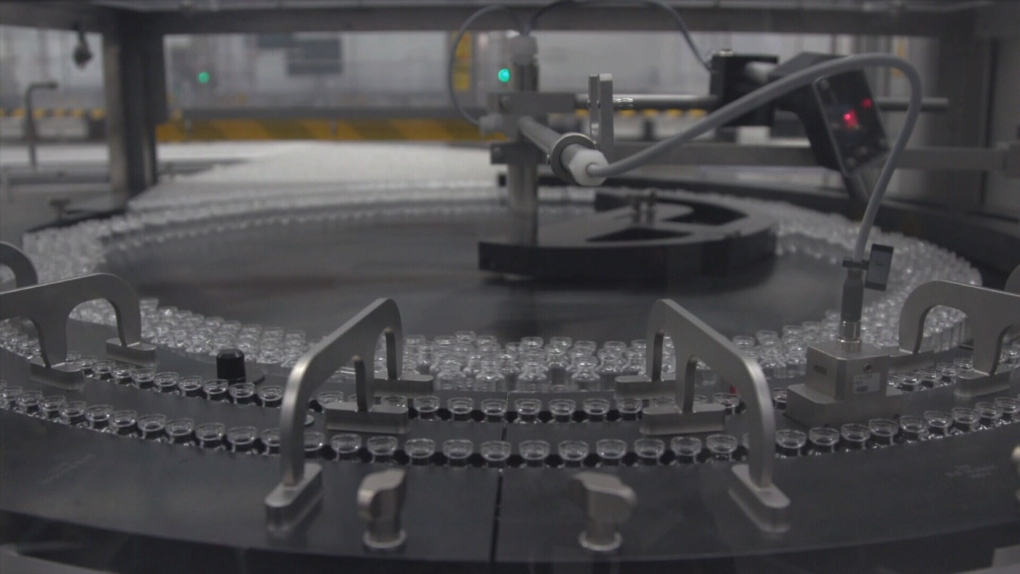 WINNIPEG -- Manitoba's premier said the province has enough supplies to give every Manitoban two doses of the anticipated COVID-19 vaccine, but said the federal government's proposed rollout of the vaccine puts Manitobans at the back of the line.

On Thursday, Premier Brian Pallister announced the province is preparing to launch a COVID-19 'super-site' vaccine campaign and pledged that over time the vaccine would be available to every Manitoban who wants it.

"We are getting ready," Pallister said, adding part of this plan is going to focus on bringing people to vaccination sites to maximize capacity.

"In other words, to get as many of you vaccinated as quickly as we can."

He said the province has installed a specialized freezer that can safely store one of the vaccines at -80 Celsius. Pallister said another four freezers are on the way, altogether having the capacity to hold one million doses.

Pallister said the province is also looking to create a specialized course on delivering vaccines so more people will be able to help handle the surge of Manitobans looking to roll up their sleeves and get the shot.

While the vaccine will not be mandatory, Pallister said he hopes to appeal to Manitobans "common sense" to get the vaccine.

Ottawa has announced a limited first wave of doses to initially vaccinate three million Canadians in high priority groups, though Dr. Brent Roussin, Manitoba's chief public health officer, said it will likely take months to immunize every Manitoban who wants the vaccine in 2021.

"Ultimately, we’ll be working on the vaccine campaign well into a year," he said.

With the province preparing for the rollout of the vaccine, Pallister criticized the federal government's proposed plan to distribute the vaccine.

"The federal government's allocation approach is going to hurt Manitoba, and it's going to put Manitobans at a disadvantaged position."

Pallister said the federal government has told the province it plans to allocate vaccines on a per capita basis and will be holding back a portion of Manitoba's allotment of vaccines for Indigenous and First Nation communities.

"What that would mean then is that Manitobans who do not live in northern Indigenous communities would be the least likely to get a vaccine in the country," he said.

Pallister called on the federal government to provide additional vaccines to be used in Manitoba's Indigenous communities first, instead of removing them from Manitoba's total allotment of vaccines.

He said he plans to meet with Manitoba Indigenous leaders next week to discuss the issue.

"I want to be clear on this—we want all our citizens to have a fair chance to get the vaccine as early as they possibly can," he said.

The Assembly of Manitoba Chiefs (AMC) said Pallister's comments are irresponsible, saying it's unfortunate he would make comments that could be construed as being divisive.

This was echoed by the Manitoba Keewatinowi Okimakanak (MKO).

"Make no mistake, the statements of Premier Pallister are inflammatory and divisive, with the potential of relegating MKO First Nations citizens to the harmful vacuum of the struggle between federal and provincial jurisdictions, and this is unacceptable," Garrison Settee, MKO Grand Chief, said in a release.

"The statements made today are harmful as they may cause deepening divisions during these incredibly challenging times. All Manitoba citizens must work together in the fight against COVID-19. We absolutely do not need to see an increase in racism experienced by First Nations people as a result of the statements the Premier has made."

But Pallister said the issue highlights the need for a national strategy to provide more clarity for the allotment and distribution of the vaccine to Indigenous people across Canada.

"Unfortunately, the rate of infection among Indigenous Manitobans is higher than it is among non-Indigenous people," he said. "So we believe it’s of critical importance to get that vaccine to our northern communities, to Indigenous people there to protect them."