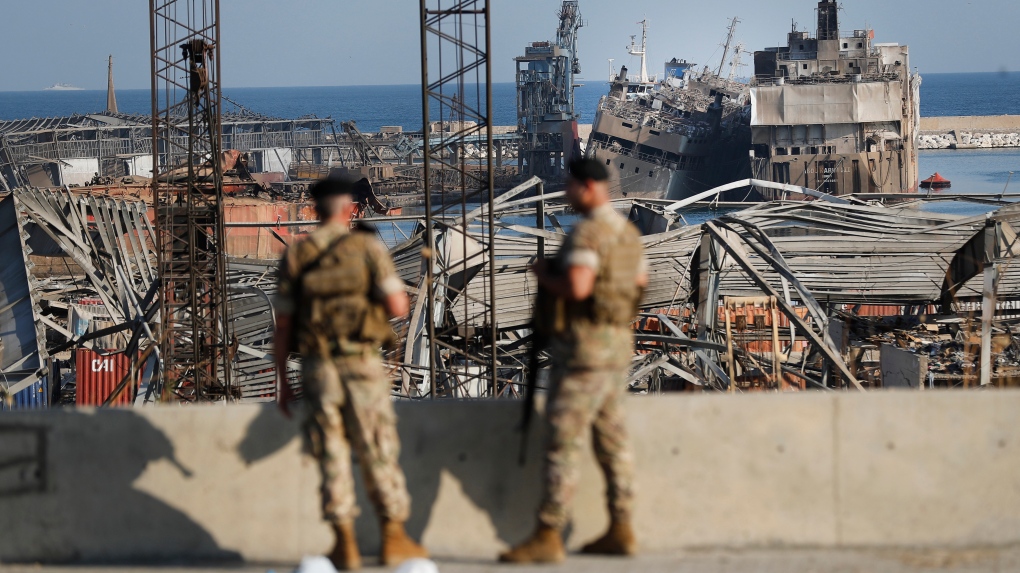 Lebanese army soldiers stand guard in front of destroyed ships at the scene where an explosion hit on Tuesday the seaport of Beirut, Lebanon, Thursday, Aug. 6, 2020. (AP Photo/Hussein Malla)

WINNIPEG -- Groups across the world and in Winnipeg are stepping up to help support Beirut after a deadly explosion.

The explosion rocked the Lebanese capital Tuesday, killing more than 130 people, wounding thousands of others, and blasted buildings across the city.

In the aftermath of the explosion as crews continue to search the rubble in Beirut, here in the province the Manitoba Islamic Association has started collecting donations for the Lebanon Relief-effort Fund.

The Islamic Association says it is working closely with the local Lebanese community and establishing charities operating in Lebanon to direct donations to support the victims of the tragedy.

"I'm appealing to all of them to come and be generous and giving and give as much as you can – nothing is too small, nothing is too big an amount," said Abdo Eltassi of the Manitoba Islamic Association. "The amount is very important. We have to stand in solidarity with all Lebanese."

Eltassi said the association will match up to $5,000 in donations.

The association is not alone. A Winnipeg café is stepping up to help as well.

The Yafa Café on Portage Avenue posted on Facebook saying its thoughts and prayers are with the people of Lebanon.

It said it will donate 50 per cent of its sales for the week to the Lebanese Red Cross.

More information about the two groups' fundraisers can be found online at the Lebanese Red Cross and the Manitoba Islamic Association.