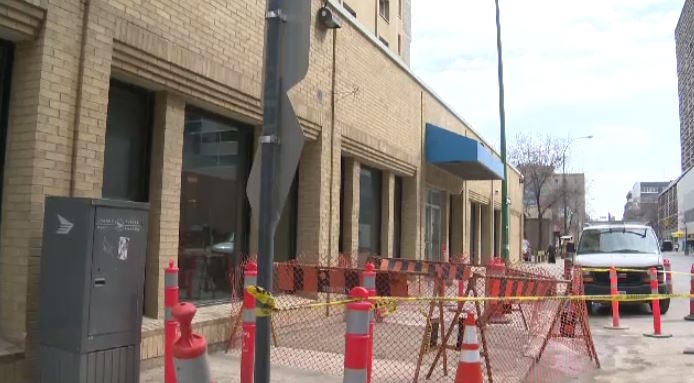 Barricades block the front entrance to 185 Smith St. after a pipe burst and caused a flood.

The provincial government has responded to concerns at a flooded Manitoba Housing tower that was evacuated in downtown Winnipeg.

Residents of 185 Smith Street contacted CTV News earlier this week after a broken pipe caused a flood at the subsidized-housing complex. They said once the 2-storey building was quickly evacuated, residents were denied access to their suites and in some cases, the pets they had to leave behind.

Friday afternoon, a government spokesperson told CTV Winnipeg, “the wellbeing of both tenants and their pets remains our greatest concern.” It said all known animals were reunited with their owners or cared for with alternate arrangements.

Thursday and Friday, Manitoba Housing and Community Development met with the majority of tenants.

The province said the building requires extensive repair, so tenants will be relocated for at least three to six months.

Tenants will remain in hotels until at least next week, and Manitoba Housing is making arrangements for on-site meals and laundry. Staff will be present in the hotel common rooms daily from 8:30 to 4:30 to help tenants.

Next week, tenants will begin moving into vacant Manitoba Housing units in Winnipeg. Their belongings will be moved, free of charge. The priority is tenants with specialized needs and the reunification of tenants with pets.  The province will work with special needs tenants to keep them close to supports.

The province said it has limited vacancies in Winnipeg, so all other tenants have the option of staying with family or friends, or in a rural unit.

It continues to provide security and maintenance patrols at 185 Smith St. to keep tenants belongings safe.