WINNIPEG -- Manitoba Hydro’s denying allegations made in a recent lawsuit, which says it’s responsible for delays in installing solar energy systems as part of a two-year pilot program.

The delays have left some customers, with thousands of dollars invested in solar projects that have yet to be completed, caught in the middle of a legal battle.

Sycamore Energy, a solar installer, filed a lawsuit against Manitoba Hydro on Dec.23, 2019 alleging the Crown corporation badly mismanaged its pilot program aimed at offering a financial incentive, about 25 per cent of installation costs, to customers who invested in solar energy systems for their homes or businesses.

In a statement of defence filed Monday in Manitoba Court of Queen’s Bench, Manitoba Hydro fired back at Sycamore, blaming the company for the delays.

“Manitoba Hydro says that all delays encountered in the program in relation to Sycamore installations were solely Sycamore’s responsibility,” the statement of defence reads.

Hydro claims the delays arose from a number of factors.

“Sycamore overcommitted on the installations it agreed to provide,” the statement reads. “In the last week of the program, Sycamore processed 128 applications for Manitoba Hydro customers under the program.

“Sycamore did not have the necessary and required personnel, resources, experience, equipment, and materials necessary to sufficiently and effectively complete the installations it committed to within the required one-year deadline for installations.”

Sycamore claims the Crown corporation caused it significant financial and reputational damage and is seeking an unspecified amount of damages for inducing breach of contract, damages for intentional interference with economic relations as well as punitive, aggravated and exemplary damages.

“From the outset of the SEP (solar energy program), Sycamore had encountered uncontrolled delays in Hydro's approvals of customer SEP applications, electrical permit approval, electrical inspection approval, installation of bidirectional electrical meters, provision of completion documentation, and payment of rebates by Hydro, which led to setbacks in installation times,” Sycamore alleged in its Dec.23 statement of claim. “This factor also led to a need for additional time to complete installation projects beyond the one-year installation deadline after the customer's signing of a purchase order with Sycamore.”

Manitoba Hydro’s statement of defence states it agreed to a number of extensions. It also denies Sycamore’s allegations that Manitoba Hydro told customers they could get an extension if they switched to a different solar installer.

The program ended in April 2018 but as of November 2019, a total of 252 approved projects were awaiting installation and Sycamore had about 100 of those projects.

Sycamore customer Evan Casselman of Boissevain, Man. said he’s paid $23, 000 for his solar system but so far the only work done on the project has been the installation of 12 posts in the ground to hold the panels. He’s worried the legal battle between Sycamore Energy and Manitoba Hydro could cause further delays.

“Of course now it’s gone to court so I don’t expect I’m going to hear anything from them until something is resolved between them and Hydro,” said Casselman. “Myself and quite a few others, apparently, are out quite a bit of money on this solar project and I’m really quite frustrated.” 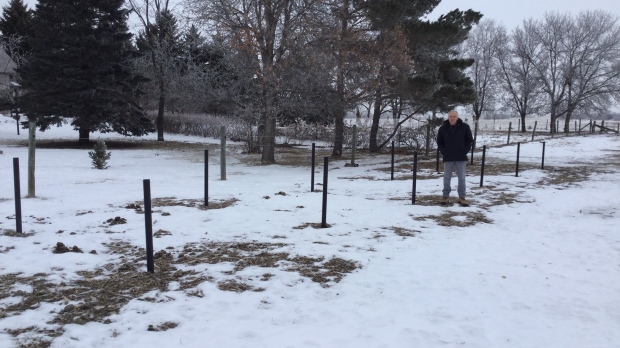 Evan Casselman of Boissevain, Man., said he has paid $23,000 for a solar energy system that has yet be installed.

Casselman told CTV News Manitoba Hydro granted Sycamore an extension until Mar. 31, 2020 to complete his project, a project he initially expected would be finished in the fall of 2018.

Manitoba Hydro has also filed a counterclaim for $111,000 against Sycamore over unpaid electrical permit fees for solar installations.

None of the allegations in either Sycamore Energy’s statement of claim or Manitoba Hydro’s statement of defence and counterclaim have been proven in court.

Responding to an email from CTV News, Sycamore Energy CEO Justin Phillips said the company has seen the statement of defence and feels Hydro’s response is weak.

“That doesn’t surprise us because the facts are squarely on our side,” he said in the email. “Manitoba Hydro interfered with and harmed our business, costing us millions of dollars and adversely affecting dozens of our customers.”

Phillips added the case is no longer just about extensions and delays.

“Manitoba Hydro’s actions have made it impossible for our company to continue in business,” he said. “Despite our intense desire to complete Mr. Casselman’s project, we are not currently able to. We have to place our trust in the courts now to help rectify this situation.”