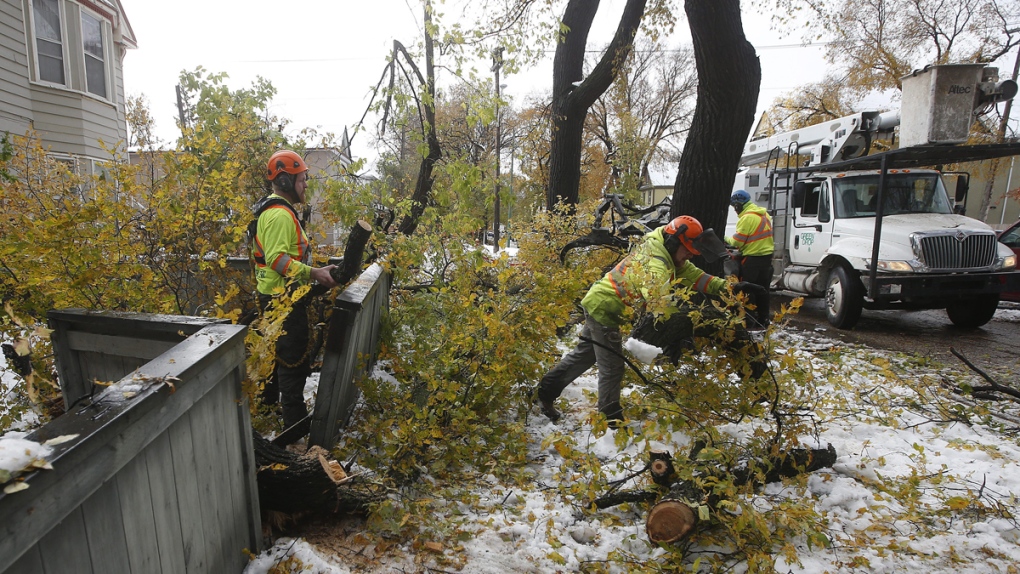 Crews cleanup after a snow storm in Winnipeg, Manitoba, on October 13, 2019. (John Woods / THE CANADIAN PRESS)

WINNIPEG -- As a major snow storm in Manitoba has left many people without power for several days – Manitoba Hydro is warning people about using fuel-burning equipment indoors.

The utility said equipment like generators, patio heaters, barbecues, or camp stoves, should never be brought inside for heating or cooking.

Fuels from these types of equipment create carbon monoxide – a highly toxic gas that can lead to death.

Hydro media relations officer Bruce Owen said there has been a report of one person experiencing the symptoms of carbon monoxide poisoning in the Manitou area.

Manitoba Hydro is also reminding people with portable generators, the same rules apply. They should only be used outside, and critical appliances should be plugged directly into the generator using an extension cord.

The utility said a generator should not be plugged into your house wiring – as it could endanger hydro crews working to restore service.

As the outages continue, Manitobans are encouraged to check on seniors and vulnerable people when they can.

PUBLIC SERVICE ANNOUNCEMENT:
Do not use fuel-burning equipment for heating.

During this extended outage, we’re reminding everyone to never use portable fuel-burning equipment - generators, patio heaters, barbecues or camp stoves - inside your home for heating.