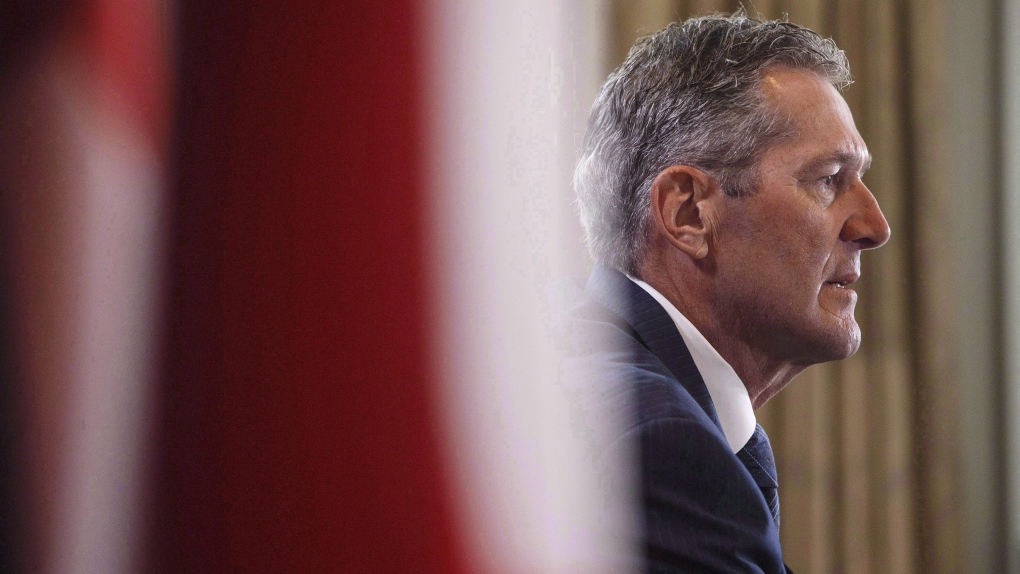 Manitoba Premier Brian Pallister speaks at a press conference during the Council of Federation meetings in Edmonton on July 18, 2017. (THE CANADIAN PRESS/Jason Franson)

WINNIPEG -- The province announced on Thursday that it will be investing $2.5 million to support additional enforcement for COVID-19.

The government is also giving over 275 personnel the power to enforce public health orders.

Premier Brian Pallister said he understands the majority of Manitobans are doing their best to stay safe and protect each other, but that isn't the case for everyone.

"There is a small minority of people who are not doing their part and they are ignoring the advice of our public health experts and in so doing, they are putting their own health at risk and the health of others at risk as well," said Pallister.

The additional staff who can enforce public health orders will all be provincial staff, including motor carrier enforcement officers, fire safety inspectors, and water resources officers.

Bylaw officers will also be available to help enforce the orders.

"At the start of the COVID-19 pandemic, we encouraged enforcement personnel to focus on educating the public,” Pallister said in a release. “Now, we need to shift our efforts toward enforcement when necessary and start hitting the scofflaws where it hurts – in the wallet."

The province noted there will be more than 3,200 people who will be able to carry out the health orders.

Municipalities throughout Manitoba will also be receiving financial resources to help create training models for officials.

Municipalities will also be reimbursed for any tickets that are written by bylaw officers.

Manitobans can report people or businesses who aren't following the public health orders by filling out a form on the government's website, or by calling 204-945-3744 or 1-866-626-4862 and pressing option three.

He said for those who have phoned before and are frustrated because nothing was done, these changes will help make sure something is done.

"So hours of operation, the dispatch functions, the linkage between the information, and who it goes to and how they act on it. All of these things are being improved," he said.

"We're not powerless, we’re powerful. We have an incredible role to play right now, the critical role to play in protecting one another."

The fines for violating the orders are $1,296 for individuals and $5,000 for businesses.