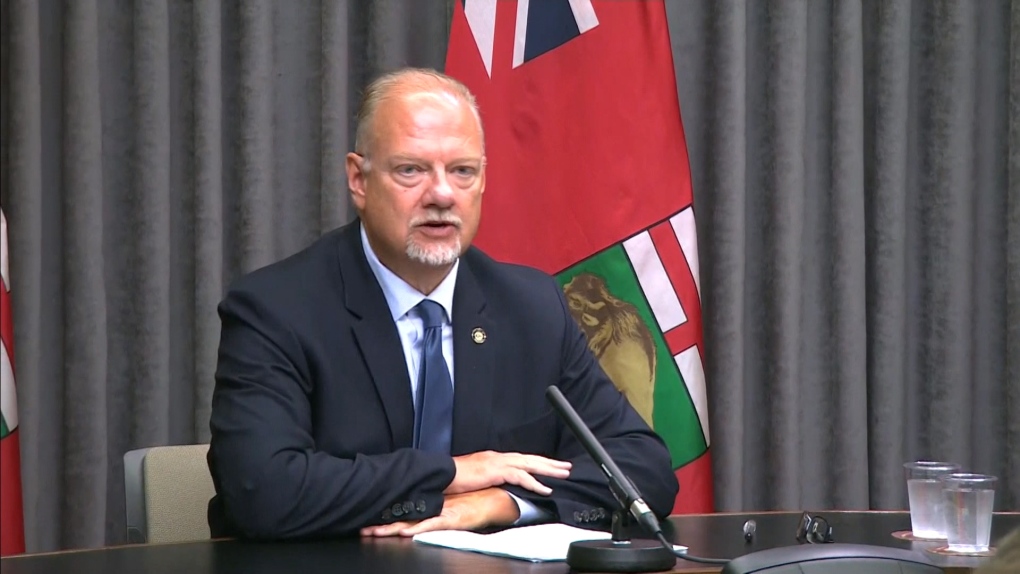 WINNIPEG -- Manitoba is mandating a two-week remote learning period for some students following the holiday break.

The province noted the risk of COVID-19 transmission in schools remains low and wants to make the return to the classroom as safe as possible.

“These decisions, we know, have various impacts. Moving to remote learning for two weeks for the Grade 7 to 12, in particular, we know can have an impact on families and they’re not made lightly, but they are made in consultation with public health,” said Goertzen.

“We believe, and still believe, that the best place for students to learn is in the classroom where it is safe to do so.”

According to the province, evidence suggests older students have a higher incidence of contracting COVID-19, a larger number of close contacts, and are more likely to transmit the virus to others as a result. Goertzen noted some of these broader contacts could come in the form of part-time jobs for the older students.

“We are reducing the risk that may be posed as a result of a change in students’ close contacts during the winter break,” said Goertzen.

“We understand that anytime there’s a significant holiday the contact patterns that students might have can change during that time. I mean, there’s a bit of a routine now, but that routine is disrupted by the holiday break, and we have seen traditionally in other places and in Manitoba where there is that holiday break, that the COVID-19 numbers can go up after the break.”

The province said by mandating remote learning, close to half of the student population will stay home following the break.

As for why students aren’t being moved to remote learning prior to the holidays, Goertzen said it gives more preparation time to move to this model.

Regular, in-person learning will continue for those in Kindergarten to Grade 6, as well as for any students in Grades 7 to 12 with special needs that must be accommodated in the classroom setting.

When students were moved to remote learning in the spring, it was initially meant to be temporary. Goertzen was asked about the likelihood of this remote learning model being extended in January.

“Making predictions during a pandemic has proven not to be a good business to be in. I do think, though, many months into this we have a better understanding of some of the dynamics. We’ve, I think, proven that the school system can operate relatively well during a pandemic and keep people safe.”

As for whether rapid testing may be introduced when in-class learning returns in the New Year, Goertzen said we’ll have to wait and see.

“Rapid testing is something that our government and our premier have indicated is a priority for us and we do believe that education has a role in that as well, and I do believe that you’ll be hearing more about that in the relatively near future.”

The move to a blend of remote and in-class learning for younger students isn’t sitting well with the Manitoba Teachers’ Society.

“It enormously increases workloads for teachers in K to six,” said MTS President James Bedford. “It’s indescribable the impact that has on workload.

The province expects many parents and guardians of younger students will keep their kids in class but exact numbers weren’t immediately available.

“What our teachers did identify, what our members did identify in an environment where they’re moving from in-class learning to remote learning is they said planning time. That was their number one priority. I did not hear today that additional planning time would be provided before the winter break.

“Members heard a minister talk about how important that break is for teachers, for students, for parents, for educational assistants -- for everybody in the educational system but then at the same time they heard, ‘Oh, I’m going to be spending part of that break figuring out how I’m supposed to teach in January.’”

The Provincial Remote Learning Support Centre will be available to help school divisions and educational staff during this remote learning period, said the province.

Deputy Education Minister Dana Rudy said hiring is currently underway with about 140 staff expected to be hired. Rudy said 120 will work in the remote learning centre, while approximately 20 will be part of the support team.

Rudy said these staff members will be teaching and supporting the students directly.

She said teachers have talked about the importance of collaborative planning and consultation and said remote learning could look different from division to division.

“Some of the ideas that we’ve talked about include project-based learning whereby an assignment could be provided for up to two weeks, so it doesn’t require as much interaction between the teacher, but that obviously does require more collaboration and support from the parents or the caregiver.”

Goertzen and Rudy both addressed some of the challenges for communities that may not have the access to the internet. They noted in some cases, their remote learning may be print-based rather than digital.

The remote learning will be mandated from Jan. 4 to 15, 2021 with students expected to return to the classroom on Jan. 18.

In August, the province announced a $100 million Safe Schools Fund for schools that may be facing extraordinary funding pressures for the 2020-21 school year.

“We are pleased to confirm the full allocation of our government’s $100 million investment, along with $85.4 million in federal funding, to keep our schools healthy and safe,” said Goertzen.

The initial $100 million is made up of $52 million in spending from the province and $48 million from school division savings from the previous school year.

The province said as of Oct. 31, more than $9 million had been spent on additional staffing, with a total of $67 million expected to be spent by June 2021.

Funds will support health and safety costs, learning and technology costs, and staffing.

School divisions and independent schools will be able to apply for additional funding for needs not covered by their Safe Schools Fund allocation through the Safe Restart Contingency Fund, said the province.

“Our government is committed to protecting our schools and providing the resources needed to keep students learning and staff supported during these difficult times,” said Goertzen.