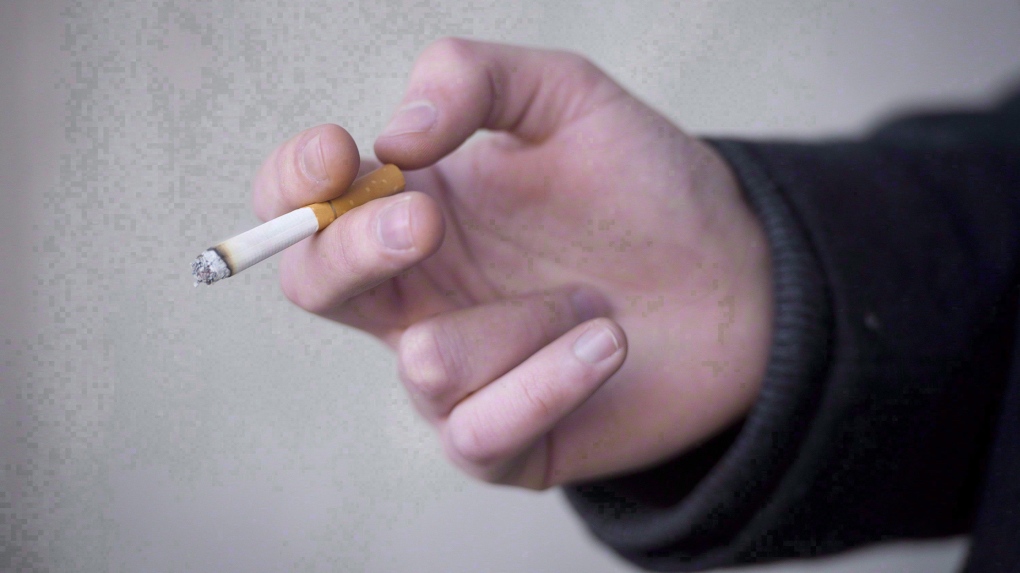 A smoker holds a cigarette outside a building in Vancouver, Monday, Jan. 20, 2014. THE CANADIAN PRESS/Jonathan Hayward

WINNIPEG -- The Manitoba government is planning to extend its ban on smoking and vaping in indoor public places to First Nations communities, but it could face a court battle.

The Progressive Conservative government introduced a bill in the legislature Thursday that would end an exemption for reserves and other areas of federal jurisdiction, including military bases, from the provincial smoking ban.

Ceremonial tobacco use would still be allowed.

"We want to ensure that our entire province, not just sections of it, provide that equitable access to smoke-free and vapour-free work environments," Audrey Gordon, minister for mental health, wellness and recovery, said.

"This issue is a public health issue."

The Assembly of Manitoba Chiefs said the province does not have the right to impose a smoking ban and could end up in court if it proceeds.

"First Nations will not stand idly by and allow the province to take liberties of this sort," Grand Chief Arlen Dumas said.

Many First Nations communities have their own bylaws that govern smoking in public places. Some allow smoking in bingo halls and video lottery terminal lounges.

Last year, after COVID-19 restrictions forced video lottery terminal lounges to close, Premier Brian Pallister said he might not let ones that allow smoking to reopen when the restrictions are lifted.

The Opposition New Democrats said the government should back up.

"Indigenous people have rights that the government has to respect," NDP Leader Wab Kinew said.

"And I think for them to announce this bill without giving people in leadership positions in Indigenous communities the heads-up is the wrong approach."

Gordon said the government will consult with Indigenous leaders as early as next week. The bill is among dozens that could be passed by the legislature in June. Although it might not take effect immediately, Gordon said.

"What I'm focused on is having that consultation. I'm really focused on that engagement and we'll save that decision (on when the law would take effect) for a later date."

This report by The Canadian Press was first published March 4, 2021.