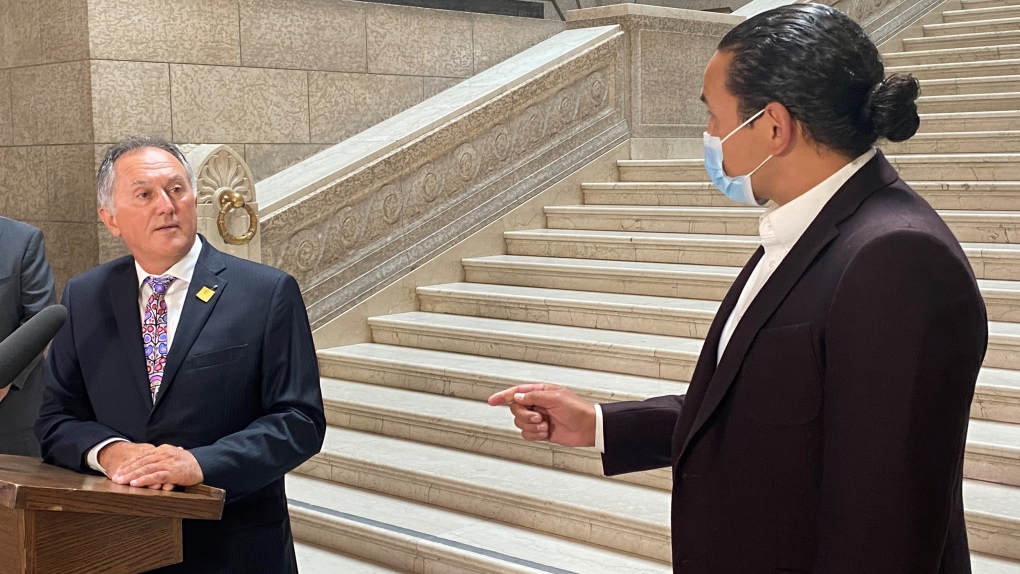 Alan Lagimodiere, left, Manitoba's minister for Indigenous reconciliation and northern relations, is confronted by Opposition NDP Leader Wab Kinew, right, shortly after being sworn in to cabinet at the Manitoba legislature in Winnipeg on Thursday, July 15, 2021. THE CANADIAN PRESS/Steve Lambert
WINNIPEG -

A Manitoba cabinet minister who, three weeks ago, defended some of the intentions behind residential schools said Wednesday the schools were part of a genocide under a plan by former prime minister Sir John A. Macdonald.

"Sir John A. ... his plan was to eliminate Indigenous people from Canada, and that to me is genocide."

Lagimodiere was promoted to the Progressive Conservative government's cabinet last month and sworn in as minister of Indigenous reconciliation and northern relations. He replaced Eileen Clarke, who resigned after Premier Brian Pallister made controversial remarks about Canadian history that were denounced by Indigenous leaders.

Within an hour of being named to the cabinet post, while answering questions from reporters, Lagimodiere defended some of the intentions behind residential schools. He said people at the time thought they were doing the right thing and the schools were originally aimed at teaching skills to Indigenous children.

Lagimodiere, who is Metis, issued a full apology the next day and has been visiting First Nations communities recently on what he called a "listening and learning journey."

The head of the Assembly of Manitoba Chiefs said he has not been reassured.

Grand Chief Arlen Dumas said it is hard to tell if Lagimodiere's reasons for using the word "genocide" are sincere or whether the minister is trying to get beyond the backlash his original comments caused.

"Fundamentally, these statements that he is making today are obviously a reaction and a realization of the ignorant and ill-informed comments that he made before," Dumas said.

"I am glad that he is getting a proper historical education."

But Dumas said it may not be enough for many Indigenous leaders who have refused to meet with the minister since his original remarks.

The distinction between cultural genocide and genocide has been brought back into focus this year.

While the 2015 Truth and Reconciliation Commission report said Canada engaged in cultural genocide against Indigenous people, the 2019 report from the national inquiry into missing and murdered Indigenous women used the term genocide.

Prime Minister Justin Trudeau said in 2019 and again this year that he accepts that finding.

In June, New Democrat member of Parliament Leah Gazan, who represents Winnipeg Centre, failed to get unanimous approval for a motion for the House of Commons to recognize the residential schools policy as a genocide.

Lagimodiere's use of the word came as he announced the next step in plans for a new monument on the Manitoba legislature grounds to commemorate the signing of the first treaty in Western Canada, known as the Peguis-Selkirk Treaty.

A design competition is being opened up for the monument, which is to feature Chief Peguis and would be the first statue of a First Nations person on the grounds.

The provincial government is putting up $500,000 for the project, which is to be completed in the summer of 2024.

This report by The Canadian Press was first published Aug. 4, 2021.