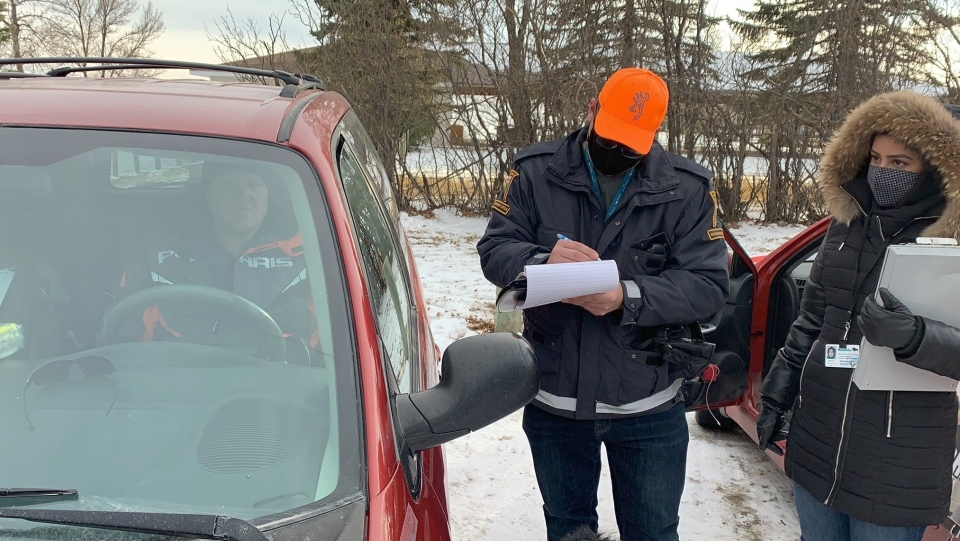 WINNIPEG -- Manitoba’s municipal relations minister sent a warning to the reeve of La Broquerie, Man., who spoke at an anti-mask in Steinbach, Man., on Saturday.

Minister Rochelle Squires took to Twitter to post a letter she sent to Lewis Weiss, the elected reeve for the R.M. of La Broquerie, who spoke at the rally, saying: "It seems very strange that our loved ones are being allowed to die when there are medicines available that very quickly and easily can cure this,".

Weiss was joined at the rally by several other speakers, including a pastor, a former chiropractor, and other community members.

In her letter, dated Nov. 13, Squires emphasized Manitoba’s Code Red restrictions, which were put in place last week to stop the spread of COVID-19. She added that Dr. Brent Roussin, Manitoba’s chief provincial public health officer, has urged Manitobans to stay home when possible, wear a mask, and limit contacts to their household only.

Squires goes on to encourage Weiss to review his council’s code of conduct bylaw, which requires him to “demonstrate strong ethical principles, and to work with other council members to further the best interests of your municipality in a consistent, truthful and honourable way.”

The letter adds that the code of conduct bylaw requires the reeve to “act in accordance with the enactments of the Legislature of Manitoba, this includes Public Health Orders under the authority of The Public Health Act.”

Squires warns that if Weiss’ actions inside or outside the council chamber defy the code of conduct bylaw, then his fellow council members can choose to file a formal code of conduct complaint, which could result in Weiss being sanctioned.

“Available sanctions range in severity, and include suspension from council for a period of up to 90 days and a fine of up to $1,000.”

“Your actions in contravention of the COVID-19 Prevention Orders may be investigated by enforcement personnel, and may ultimately result in a fine,” the letter reads, adding that breaking public health orders can result in $1,296 fines for individuals and $5,000 for corporations.

Squires ends her letter to Weiss by recommending that he reviews the information on Manitoba’s COVID-19 response website and “consider how your words and actions may impact the safety of your community, and take the appropriate next steps to resolve the situation.”

In an interview with CTV News on Monday, Squires said Weiss was warned not to attend the rally.

"I wanted to make sure the reeve was well aware of the consequences of his actions," Squires said in the interview.

"I've heard from many members of that community who were not pleased by the reeve's actions and participation in that rally.

"There's a book I have a lot of time for and one of the things I always hold high in that book is a phrase, thou shalt not kill. Maybe you can reflect on that," said Pallister.