WINNIPEG -- New modelling data released by the province shows daily COVID-19 tests are dropping and will continue to drop through the summer, but severe outcomes will remain high for the next few weeks.

Manitoba public health released the modelling data on Friday, giving Manitobans a glimpse at what their summer may look like.

The data – which has projections to the end of September – shows Manitoba's current daily COVID-19 cases are under the moderate scenario and decreasing. 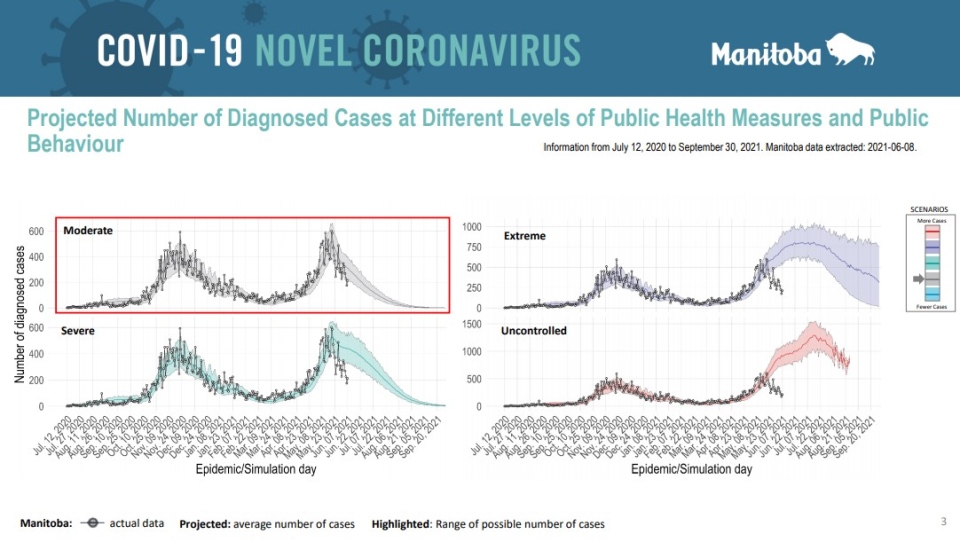 "This indicates the restrictions have been in place, and the adherence to those restrictions by the public helped reduce the spread of the virus in Manitoba – this is why we have been able to begin easing restrictions and begin charting a path to reopening," Dr. Jazz Atwal, the deputy chief provincial health officer, said on Friday.

Modelling data released in mid-May showed Manitoba was dealing with the worst-case scenario.

Now, nearly a month later – and with weeks of tighter restrictions at play – the outlook isn’t as dire.

"Our case numbers are headed in a good direction, and our vaccination rates are increasing, but we continue to see strain on our health-care system, and we continue to transfer patients out of the province for care." 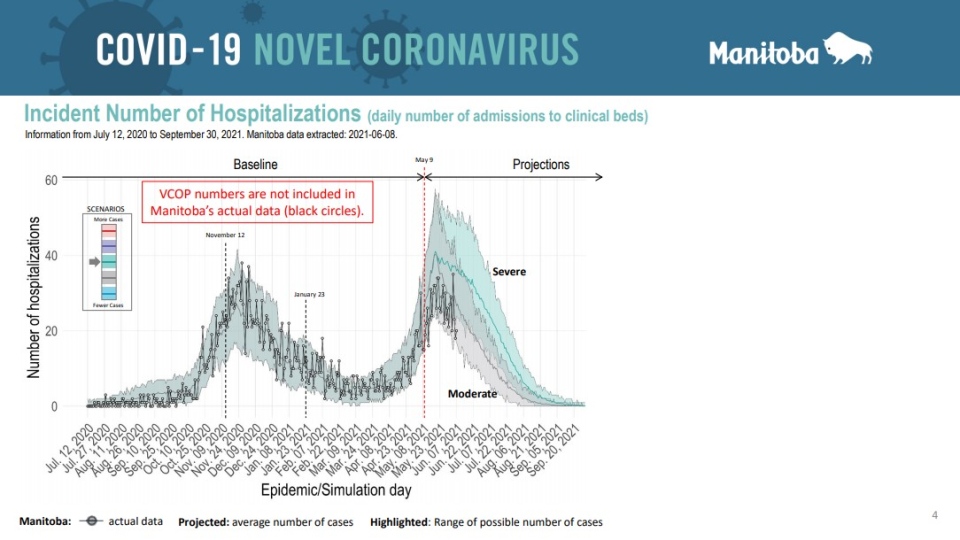 Atwal said despite case numbers coming down in Manitoba, a high number of severe outcomes will continue over the next weeks as case counts and test positivity rates are still high.

"Severe outcomes tend to occur one to two weeks after diagnosis," Atwal said.

Hospitalizations are projected to remain in the severe scenario for the next few weeks.

The province is looking at both severe and extreme scenarios for ICU admissions as dozens of patients continue to receive care outside of the province.

Epidemiologist Cynthia Carr said the national median length of stay in hospital is as high as 14 days for the oldest population.

“People can still be in the ICU even after the virus is not detectable because that is how serious the impact is on our respiratory system, our circulation, our cerebral vascular system," she said.

"This virus attacks the body from head to toe.”

Atwal said the modelling doesn’t take into account the more transmissible delta variant as of yet.

“There is no screen yet for the delta or the kappa variant. Those are being developed, but if a positive test result doesn’t screen in for the alpha, beta, or gamma variant, those are automatically sequenced.”

The modelling also shows the daily number of COVID-19 tests has decreased and is now below projected levels.

Atwal noted this is likely related to the virus circulating less because of restrictions and adherence to the restrictions.

You can see the full modelling data here: