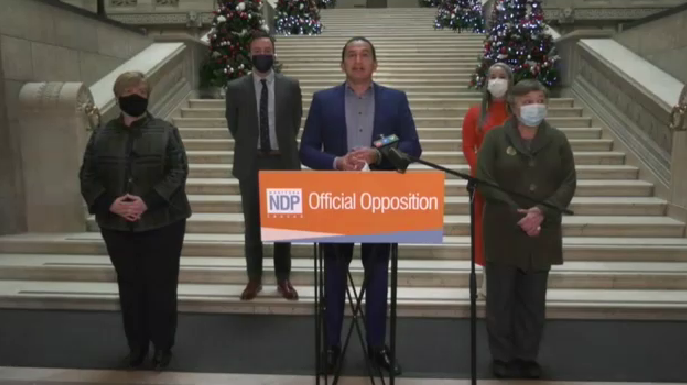 WINNIPEG -- The Manitoba NDP is calling on the provincial government to stop rent and hydro increases, citing it's making life more expensive for seniors during the pandemic.

NDP Leader Wab Kinew took to the podium Tuesday morning to express his displeasure with the increases.

"One of the top jobs of government is to make sure life is affordable and to make sure things don't get more expensive for people here in the province," said Kinew.

According to the opposition party, the Pallister government has approved 100 per cent of the rent increase requests that fall outside the Residential Tenancies Branch (RTB) limit of 2.4 per cent for 2020.

The RTB, however, said while 100 per cent of applications are usually approved, they are not necessarily approved at the rate applied for.

In most cases, the board said rent increases are at or below the guideline set every year, which follows a formula outlined in the regulation.

The Manitoba NDP brought Deborah Kunkel to speak, a senior dealing with a large rent hike.

Kunkel says her rent has increased by 30.3 per cent, almost $300 more every month since the landlord made some improvements to the building earlier this year.

The RTB said landlords can apply for a bigger increase than the guideline if they can prove that the approved increase can not cover their costs.

Kunkel's landlord originally wanted to increase rent in May, but a provincial freeze due to pandemic delayed it until October.

"Some people call it a reno-viction," Kunkel said. "A lot of tenants moved out."

She has since filed an appeal with the RTB.

"Seniors like Deborah are not getting a 30 per cent increase in their pension, so how is the government allowing them to see their rent to skyrocket at the same time?" Kinew said.

The Pallister government said it is keeping life affordable in the province.

"Our government has cut taxes across the board, making like more affordable for Manitobans," said a government spokesperson in an email to CTV News. "We also recognize the impact that COVID-19 is having on Manitobans, which is why we've brought in very generous business and wage support programs to help keep more Manitobans working, and why we had the longest rent freeze and eviction moratorium in Canada."

The NDP is also against the Manitoba Hydro bill increase of nearly 3 per cent, which was voted on by the Pallister government and takes effect December 1.

In an email to CTV News, Manitoba Hydro said the increase helps ensure the company has adequate cash to maintain, rebuild and expand the electricity system to serve customers reliably.

The Crown corporation said the increase means a residential customer will only be paying a few dollars more each month.

"It is hypocritical for the NDP to talk about affordability. During the last five years of the NDP government, Hydro rate increases were over 16 per cent higher than they have been under our government," a spokesperson for the Pallister government said.

"The government needs to refocus on keeping life affordable," said Kinew. "We need to make sure people have more money to weather this storm of the pandemic."