Manitoba releases who will be next in line to get vaccinated 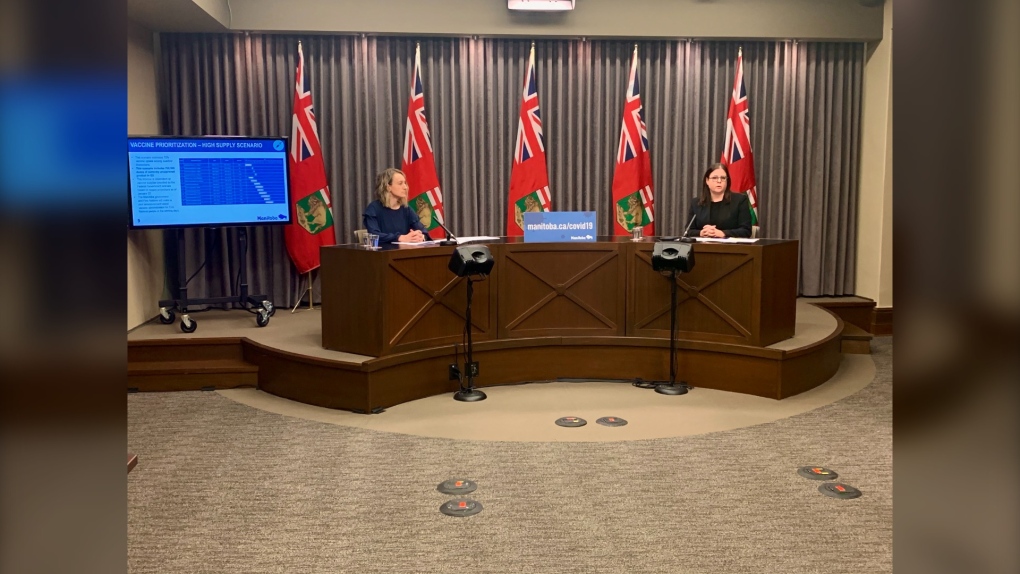 WINNIPEG -- Manitoba has released its plan for the future of the COVID-19 vaccine rollout and which groups will be next in line to roll up their sleeves to get the shot – but it could change depending on vaccine availability around the globe.

The first phase of the plan which has been underway since vaccines started to arrive in Manitoba in December, has prioritized residents in personal care homes, health-care workers in direct contact with patients, and adults in Indigenous communities.

The next stages will expand the eligibility of those who can get the vaccine.

"As all of you can appreciate, there is no step-by-step playbook to follow," Stefanson said.

"But through their efforts and examining different options and approaches from around the world and across Canada, this team has put together the most wide-ranging plan possible - recognizing that some elements such as vaccine supply are out of our control." 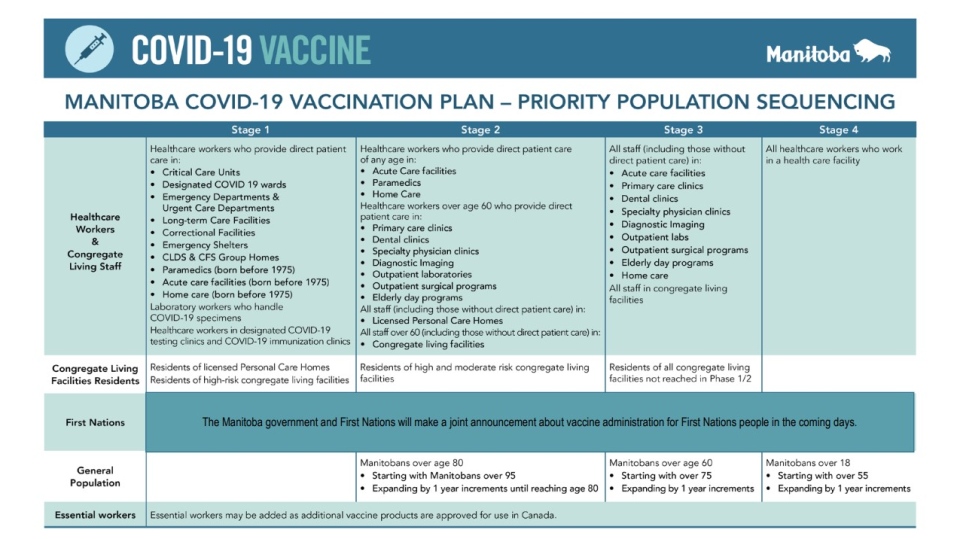 The second phase, which is expected to begin as early as April, expands the number of health-care professionals able to get the shot. It will include, among other professions, all staff in personal care homes (even those without direct patient contact) over the age of 60.

Under this stage, the Focused Immunization Teams (FIT) that have been delivering the vaccines to personal care homes will move into other high-risk congregate living settings, including long-stay hospital patients and supportive housing facilities.

In future stages, these teams will also work in shelters, transitional housing, and correctional facilities.

The National Advisory Committee on Immunization, which sets broad recommendations for the country, recommends essential workers be included in this second stage. However, the province would not provide any information about the eligibility of essential workers or when they may be able to get the vaccine.

The province said it will be doing stakeholder consultation and more research into the epidemiologic factors and workplace health and safety before it makes any decisions.

Another unknown in Manitoba's future vaccine rollout is the plans for immunization among First Nations. The province said it will be making a joint statement with First Nations about the rollout in the coming days.

Stage 2 will also see the general population get its first crack at the vaccine in March, beginning with Manitobans 80-years-old and older. The eligibility will incrementally work its way down through the lower age groups.

As for Manitoba's youth – they sit lower on the priority list.

She said as more vaccines are approved in Canada, the province will look at the vaccine rollout among children and youth.

"As we've said, there will be a vaccine for everyone who wants it in Manitoba, but depending on your situation, you may need to be patient," Reimer said.

She said the timeline will change depending on the availability of the vaccines. The province has created two scenarios for Manitoba's rollout. 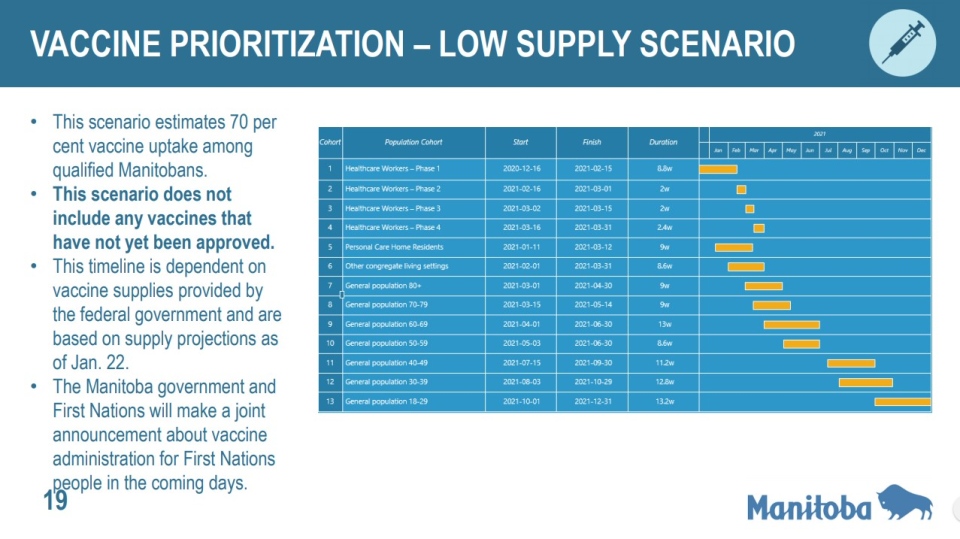 Due to shortages of the Pfizer vaccine, the scenario with a low supply of the vaccine projects Manitobans will all have the chance to be vaccinated by the end of 2021.

The province said this low-supply scenario does not account for any of the vaccines that are yet to be approved in Canada.

Reimer said there are currently three vaccines in development, which if approved, could be used to help significantly boost the rollout of the vaccine.

"The new vaccines can be safely stored in doctors' offices and pharmacies in the fridge, not necessarily in freezers like we see with the existing vaccines," Reimer said. "This could be the way that we deliver hundreds of thousands of doses, and that is significant."

The province said a high-supply scenario accounts for 700,000 doses of vaccines that have yet to be approved.

Under this high-supply scenario, all Manitobans who want the vaccine should be able to be vaccinated by the end of August 2021. 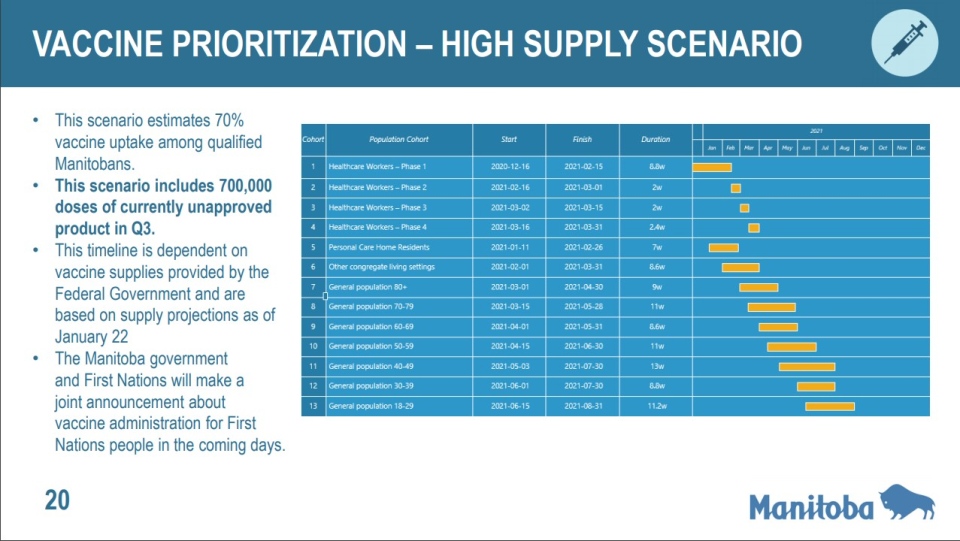 The province said both scenarios estimate 70 per cent of qualified Manitobans will agree to get the vaccine.

Reimer said the province plans to release an online calculator so Manitobans can find out where they fit into the vaccine rollout.

Based on Manitoba's most recent information, health officials said the province ranks third across the country for total population vaccinated behind only Ontario and Prince Edward Island.

"We are on track to complete all first doses for personal care home residents this week," Reimer said, adding more than 5,200 residents have been immunized. 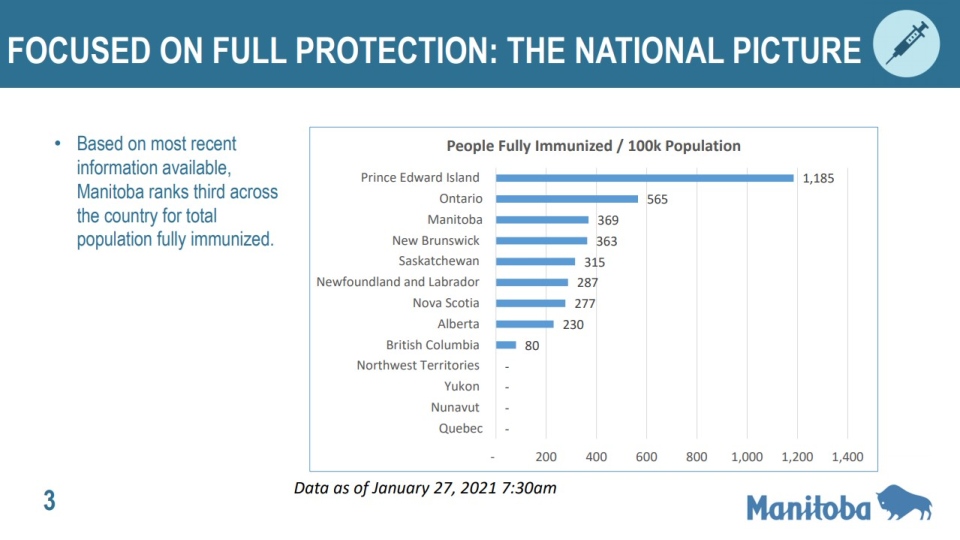 Due to the shortages, the province said all appointments going forward will be second-dose appointments.

Manitoba is not expected to get a delivery of the vaccine this week. The province said it will receive 2,340 doses of the Pfizer vaccine instead of the expected 5,850 doses during the week of Feb. 1.

Beyond that, the province said it does not know if or when the next shipment of the Pfizer vaccine will be delivered.

Reimer said the province hopes to get more information on Friday.