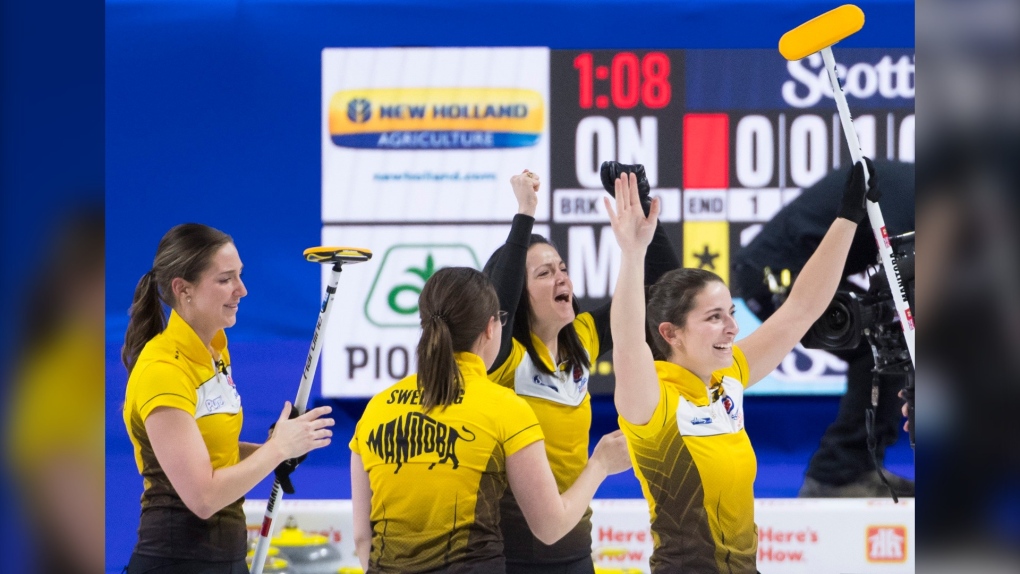 "This means absolutely the world to me," Einarson said. "I really wanted to do this for myself and my teammates.

Einarson was heavy on a draw against two for the win in the 10th. She gave up a steal of two to force an extra end.

The skip did not make the same mistake in the 11th. Einarson drew against two for the point she needed.

"I just really took a deep breath and really focused on what I needed to do," she said.

"I wanted to bring my sweepers into play for it to be more of a team shot rather than just throwing it down there and praying that it stops like I did on the first one.

"The team judged it well and put it right on the button."

Einarson also gets a return trip to next year's Hearts in Thunder Bay, Ont., as Team Canada.

As this year's national champions, the team is eligible for just under $170,000 in Sport Canada funding over a two-year period.

"It sucks to lose, but it's awesome to lose to such a good team," Homan said. "They're going to be great representatives for Canada and good luck to them.

"One shot here and there and we'd be the next ones to wear the Maple Leaf on our backs. We're happy with our performance this week. There's a lot of teams that would have wanted to be in that final."

Einarson and her teammates all skipped different teams in 2017-18 before joining forces.

That combination raised eyebrows given how specialized each position on a team has become.

"The girls knew all of us coming together would be a really good idea," Einarson said. "Everyone really embraced their positions when we came about with this team."

Einarson lost in the Hearts wild-card game in Sydney last year to fall short of a berth in the main draw.

She lost back-to-back Canadian finals skipping Alberta in 2014 and 2015, losing to Homan and Jones respectively.

"It's heartbreaking," Sweeting said. "I didn't know how many times I could get back up. It just shows you have to. So honoured to get that Maple Leaf."

Einarson stole a point in the second end and generated two in the fourth and the sixth.

Homan drew for her first deuce in the ninth and trailed 7-5 coming home without last-rock advantage.

Ontario's skip attempted an intricate triple takeout to score three in the seventh, but mustered just a point.

In a dramatic sixth end, stones of both colours clustered on and around the button with Manitoba counting two.

Homan's raise pushed one of her counters to second shot, but Einarson then delicately nudged her own stone towards the pin for the two points.

Homan attempted a raise double, but left Manitoba shot stone in the fourth. Einarson drew the four-foot rings for two.

Homan attempted an angle raise for two in the second end. She missed to give up a steal and trail 2-0.

Manitoba, Ontario and the Jones wild-card team each posted 9-2 records in the pool and championship rounds.

This report by The Canadian Press was first published Feb. 23, 2020.