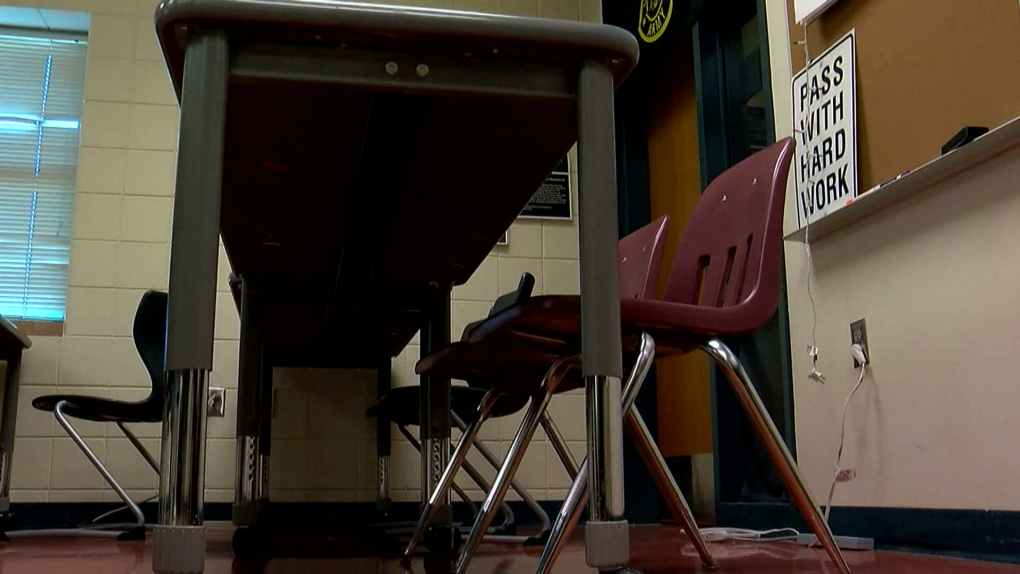 A classroom is pictured in a CTV News file photo.
WINNIPEG -

Manitoba’s education minister has written a letter to the Manitoba Teachers’ Society (MTS), saying the union is circulating misconceptions regarding Bill 64: The Education Modernization Act and the Better Education Starts Today strategy.

“Bringing parents and students into the mix and sharing false information creates fear, politicizes the classroom, and does nothing to support our leaders, students, and families who need this support now, more than ever,” says Education Minister Cliff Cullen in the letter addressed to MTS President James Bedford.

Bill 64 would see changes to Manitoba’s Kindergarten to Grade 12 education system, including replacing the school divisions with 15 regions overseen by a provincial oversight body. It would also remove elected school boards and the role of school trustees.

“They also still engage with students, parents and lead staff,” the letter says.

“They can form their own bargaining unit or be non-unionized, if that is what they decide.”

Cullen writes that the Public Schools Act is 100 years old and does not reflect the diversity and needs of all of Manitoba’s regions. He says the proposed changes would reduce “top-heavy and duplicative administration practices,” which would allow the province to put more money into resources for educational assistants, special needs programming, and supports identified by parents and teachers.

Under the province’s proposed education changes, parents and primary caregivers would be able to represent individual schools through school community councils with elected members.

Cullen says the goal is to provide parents with more of a voice, while still respecting the roles, responsibilities and value of principals, vice-principals, teachers and school staff.

“It is not either/or,” the letter states. “Parents are not replacing educators.”

In the letter, Cullen says provincial assessments are one part of the overall assessment plan, but the new framework would “build in more classroom supports and resources for formative assessment.”

“Every learner in unique and information about their growth is gathered through conversations, observations, and other interactions in the classroom; portfolios; personal reflection; and self-assessments,” he says.

“Summative assessments at the end of the year will provide pertinent information about each student’s knowledge and skills in relation to learning outcomes as set out in the provincial curricula, and will help to improve student learning by identifying student strengths and needs that can be addressed in subsequent years.”

The minister notes that steps will be taken to prevent comparison and test scores won’t impact teachers’ pay.

As for the move to replace school divisions with 15 regions overseen by a provincial oversight body, Cullen says the Provincial Education Authority would not make decisions in isolation and would rely on local leaders at the regional and school levels.

He says the education system would be led by regions with greater parental and community input.

“This will ensure that local decision-making will be stronger and will build upon successful programs that currently exist in your schools or new programs developed as identified through input from the School Community Council,” he says.

Cullen notes the province wants to open doors, not close them, and asks the MTS to correct any false information it’s been circulating.

THE NEED FOR A MEETING

Bedford says when he read the letter all he could really think is that the province and the MTS need to have a meeting.

“That letter, the points that are made and the lengthy attachment really speaks volumes to the fact that we need to sit down and have a conversation, ask some questions, get some answers, have a discussion,” he said, noting the union has been asking for a meeting, but is still waiting.

He said a lot of the letter really demonstrates the fact that there hasn’t been communication between the two groups.

“What I really am looking for is a back and forth conversation,” he said,

Bedford said public educators have a lot of questions about the legislation and a conversation with the province would allow them to get some answers.

- With files from CTV’s Michael D’Alimonte.