WINNIPEG -- What started out as a class language project about animals of the north for a group of Manitoba students is now garnering attention from an internationally known Canadian singer.

With the help of their teacher and class great-grandmother, Kindergarten to Grade Two students from the Isaac Brock Cree Language Immersion Program learned to sing a well-known children’s song “Baby Beluga” in Cree.

Colleen Omand, a Cree language bilingual teacher, said the class made a music video using their own drawings with the help of others in the school. 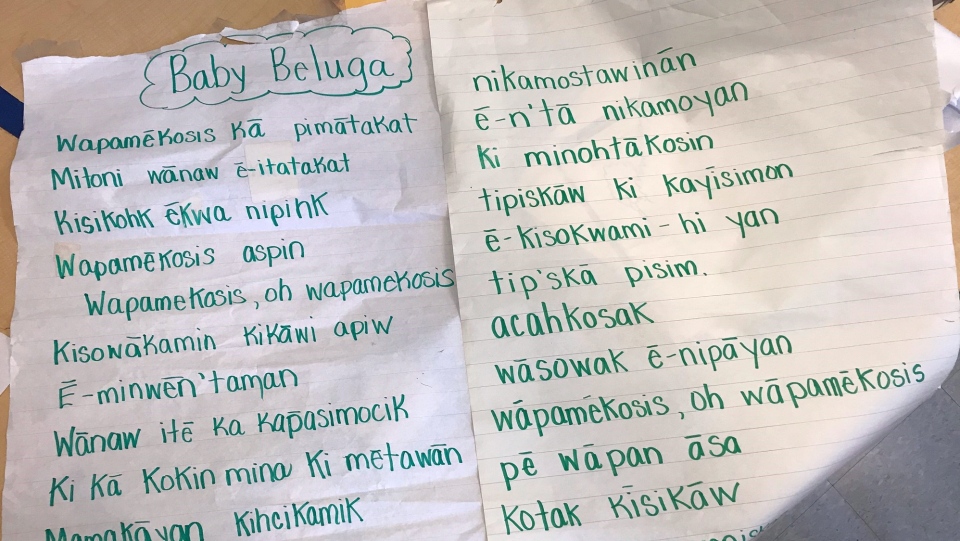 “I didn’t realize that it would have a such a huge success and impact by the social media people commenting—how wonderful it is to hear and see the children speak and hear the language in Cree,” Omand said.

The class won the contest and will receive a $500 prize, and they also won praise from the song’s composer Raffi Cavoukian, who said this version is stunning.

“It touched my heart," Cavoukian said. "Now to see in this small way a reclaiming of language is thrilling. I think it's just marvellous. It's exactly the type of thing we want to see."

Omand said seeing the youth actively learning the language has given her hope for the revitalization of Indigenous languages.

“The students are actually taking the language home to parents that may not know or have spoken the Cree language, limited language. And they are able to communicate with their grandparents,” said Omand.

“They share the language with other students in our school and now they are getting to share it with the wider community," said Tran. "It's very special to be even a little part of."

Cavoukian hopes others will be encouraged to learn Indigenous languages in the same manner.

“To help children have fun with reclaiming language, right? Because when you have fun that’s when learning is beautiful,” Cavoukian said.

The class hopes to someday sing O Canada in Cree at a Winnipeg Jets game.