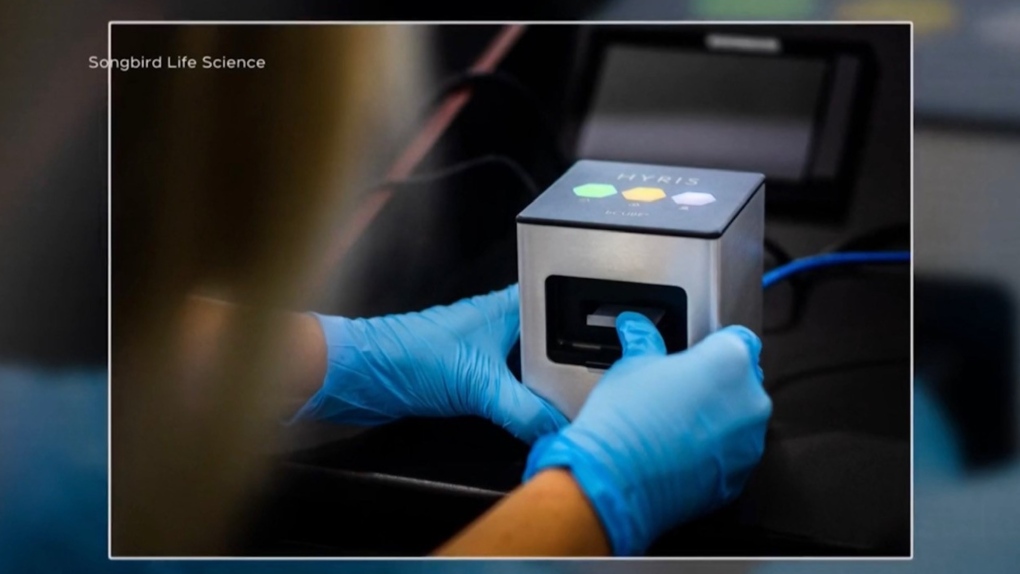 The Hyris bCUBE will be used in schools throughout Manitoba to do rapid testing for teachers. (Source: Songbird Life Science)

WINNIPEG -- Teachers in Winnipeg are next in line to get rapid testing for COVID-19, Manitoba Premier Brian Pallister announced Thursday.

A pilot project will start in the New Year, following the two-week remote learning period.

“Our government will be prioritizing teachers in the next wave of dedicated rapid COVID-19 testing,” Pallister told a media conference.

Approved by Health Canada at the end of September, the Hyris bCUBE is a portable tabletop testing device.

It is manufactured in Italy and Germany by a company out of the U.K. and distributed by a Guelph, Ont. company called Songbird Life Science.

Using a nasal swab, it can produce a COVID-19 result in 90 minutes with 95 per cent accuracy, including in asymptomatic carriers.

Pallister said the provincial government has spent $40 million on the technology to do 45,000 tests per month for the next year.

Winnipeg teachers will be the first in Manitoba to get tested with the bCUBE as part of a pilot project starting in January, following the two-week remote learning period.

Plans to expand testing to teachers outside Winnipeg and exact details on the testing process are expected soon, but so far the Manitoba Teachers’ Society is happy with the move.

“What we’re after is to try and minimize the time the teacher is absent from the classroom,” said teachers’ society president James Bedford.

Bedford thinks access to rapid results will help minimize teacher absences after known school exposures or if teachers have symptoms. But he said teachers are still concerned about the time it takes for public health to notify them about cases and potential exposures.

The premier said the province will have the capacity to test every teacher and every educational support staff member twice a month until the end of the school year, if needed.

It’s left some wondering when the technology will be used for staff and residents in personal care homes, which have been hit hard by COVID-19.

As of Dec. 2, a total of 64 outbreaks have been declared with 16 now over and 48 still active. So far, 443 staff members have tested positive while 862 cases have been identified in residents with 162 deaths.

“I certainly don’t wish that teachers wouldn’t have the testing,” said Jan Legeros, executive director of the Long Term and Continuing Care Association of Manitoba. “But I do think that the personal care homes certainly are in dire need.”

“We have been asking for this for many months. We know it works, we’ve seen in other (areas) where they’ve put it in place that it really helps because you can cohort and isolate much more quickly based on the results of the test.”

“You’ve got not just residents that are vulnerable, that’s not the only factor,” said Carr. “We have to remember that within a personal care home setting, there can be residents that are going to acute care settings back and forth.”

Carr will be watching to see how well the pilot project works in identifying cases in schools.

“This is a population and a group that we want as much as possible, for social well-being and educational achievement, to keep in school,” said Carr. “So this particular test, because it’s a PCR (Polymerase Chain Reaction)-type test with that better sensitivity and specificity to identify people who are asymptomatic, this would be the population to try that in.”

Carr said it could also help health officials better understand how the virus is spreading.

“It looks like there’s a low positive test rate within schools,” said Carr. “We’re still learning about the science of the disease among students, so even if just teachers are involved we’re still learning about: do younger people transmit the virus well, or at all, and, of course, the teacher is in the age group where we do show symptoms we do get sick.”

Asked why teachers are being prioritized for rapid testing, chief provincial public health officer Dr. Brent Roussin hinted other projects are also in the works.

“This is just one of many steps that we’re taking,” Roussin said.

The top doctor suggested they’re looking at a number of things, including doing more routine testing in personal care homes.

The premier said the rapid tests won’t be done on students.

The Manitoba Teachers’ Society hopes the province comes up with a way to do asymptomatic testing among students.