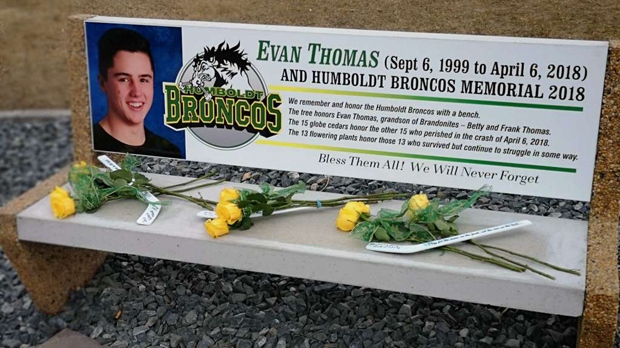 Manitobans are marking one year since the Humboldt Broncos bus tragedy.

Sixteen people were killed and 13 were injured after the Saskatchewan hockey team's bus collided with a semi driven by a novice trucker who had blown the stop sign at a rural intersection on April 6, 2018.

In Brandon Saturday, David and Noreen Maguire said they were one of three couples who laid yellow roses on a bench honouring the victims and player Evan Thomas, 18, who died in the collision.

The Maguires have been friends with his grandparents, Frank and Betty Thomas, who live in Brandon for 20 years.

Along with the roses, the couples placed mini sticks from the Humboldt funeral on the bench.

The Maguires said the bench was created by a group of people in the community and sits outside the Keystone Centre in Brandon. It has a ramp going toward it which makes it easy for people to visit all year round.

“It’s lovely. It’s a good representation of the city of Brandon,” said David.

“It’s just wonderful to go by to say a little word or wave every time you by,” said Noreen.

The couple said it was important for them to mark one since year since the tragedy because of their connection to the Thomas family, but even if they didn’t they would be thinking about it.

“We’re hoping some good has come out of this. That there is going to be better regulation, try and to look at the positive parts of it,” said Noreen.

“I hope that everyone in their individual lives, thinks about what’s important.”

The Maguires also helped create a shrine at the Evan Thomas’ grandparents home after the crash one year ago.

At the time, the crash struck a chord with hockey-loving Canadians and moved people around the world to put hockey sticks on their front porches in solidarity with the Humboldt community.

In the past year, more than $15 million was donated for the victims' families.

A service led by the team's pastor is being held at the Humboldt arena Saturday, where rows of yellow banners hang above the main entrance with the names of all 29 people who were on the bus that day.

Marci Crisanti is a friend of the Thomas family in Brandon.

She had an initial idea to plant a tree in memory of Evan, but after speaking with several business owner, it blossomed into a memorial.

People in Brandon and the surrounding area were very generous with their donations. The Keystone Centre stepped up by providing a space for the memorial.

In addition to the bench, there is now a tree dedicated to Evan, along with 15 bushes representing his teammates on the bus and 13 flowers for the survivors, Crisanti said.

“Evan’s team is still together in Brandon.”

She said the first thing she did Saturday was text Frank Thomas, Evan’s grandfather to say how much she was thinking of them.

Crisanti is also submitting an organ donation card tomorrow, for ‘Green Shirt Day’. This day honours player Logan Boulet, who donated his organs after the crash.

“This is something so tragic. If something good can come out of this tragedy, than their passing wasn’t in vain,” Crissnti said.

“I hope the good helps families with their healing.”

-With files from The Canadian Press.