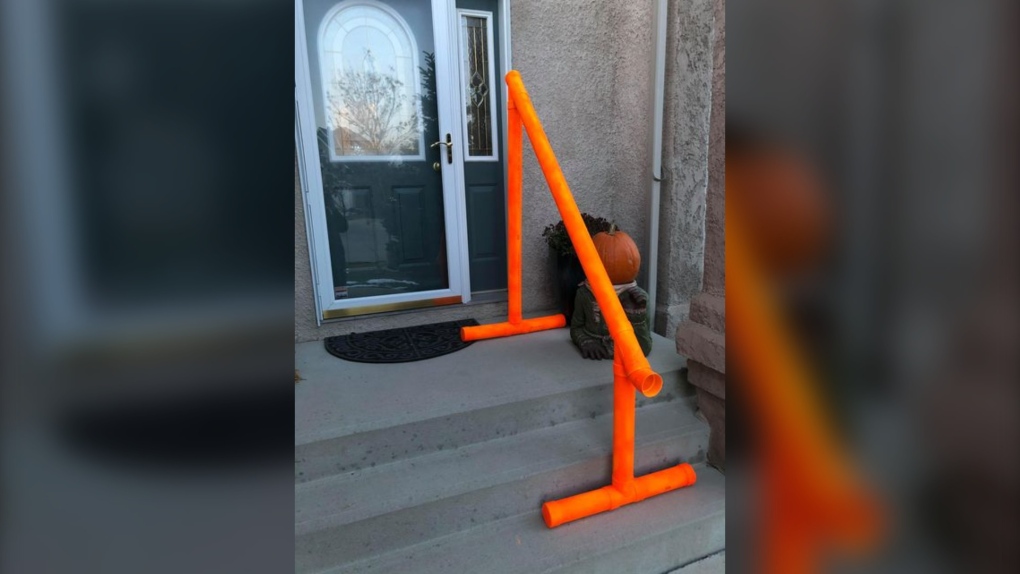 WINNIPEG -- As Winnipeggers look to keep Halloween a COVID-19 safe event, people are building contraptions to give trick-or-treaters candy from afar.

A quick search online will show a plethora of DIYers making candy slides.

Justin Smith, a sprinkler fitter by trade, decided to make one for himself.

“I did see it online, people doing it across the U.S., so I thought I’d give it a try,” said Smith.

After a quick run to the hardware store, Smith had the necessary PVC pipes and fittings.

To make it more festive, Smith spray-painted the slide orange.

“Originally, I bought one can thinking it would be enough, but eight cans later, I was still painting it,” Smith said.

Smith said the project fairly easy for people to make.

“We just had to measure to see how high we wanted it and to make sure it was past that six-foot mark,” he said.

Touting its ease of use, Smith said the slide is an example of thriving in a new normal and keeping Halloween alive.

“It is important for kids’ wellbeing and for that social aspect of it to continue what we do normally but with safety protocols in place,” said Smith. “I just think this is a good way to keep the Halloween spirit going.”

For those not as handy as Smith, Kozak Heating and Plumbing in Carman, Man. is making candy slides for people who donate to charity.

“I originally thought for family members it would be cool, like for grandparents,” said Chelsea Kozak, the bookkeeper for the family-run business. “It sort of just snowballed from there.”

The company will build and install slides for Carman community members who donate a minimum of $25 to the Back Door Youth Centre, a local charity.

“They do all kinds of stuff for the community,” Kozak said. “The Back Door is doing an expansion which is going to be really beneficial to them.”

So far, the company is making 14 slides.