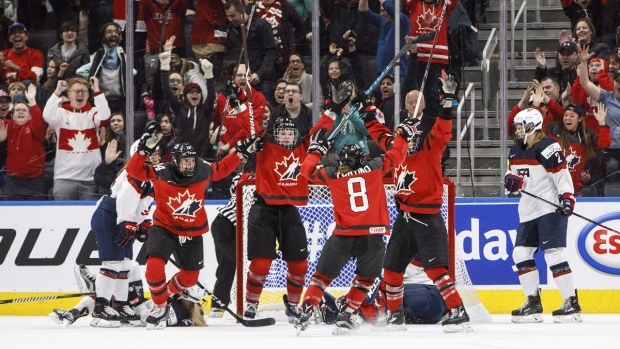 Canada's roster includes 14 players from the team that beat the United States 3-2 in an overtime thriller to win gold in Sochi, Russia in 2014. (Source: Jason Franson / THE CANADIAN PRESS)

CALGARY -- The day the women find out if they're going to play for Canada's Olympic hockey team packs an emotional wallop.

Elation, tinged with empathy for those who didn't make the cut, was on the faces of the 23 players introduced Friday as the team chosen to defend gold in Pyeongchang, South Korea.

"There are two major emotional moments in a year," forward Brianne Jenner said. "The first one is finding out you're an Olympian and the second, of course, is how you do at the Olympics.

Canada's roster includes 14 players from the team that beat the United States 3-2 in an overtime thriller to win gold in Sochi, Russia in 2014.

Twenty-eight players were invited in May to try out for the 2018 edition. Based in Calgary, they've been training and playing a full schedule of games since August.

Defenders Halli Krzyzaniak of Neepawa, Man., and Micah Zandee-Hart of Saanichton, B.C., and forward Sarah Potomak of Aldergrove, B.C., were the last cuts from the team.

"It's such a hard process," forward Marie-Philip Poulin said. "It's bitter and sweet. We're like a family. To see some girls leave, it's always hard."

Olympic women's hockey rosters have increased from three goaltenders and 18 skaters in 2014, to three and 20 in 2018.

Head coach Laura Schuler, a forward for Canada in the 1998 Olympics, chose to go with six defenders and 14 forwards, instead of seven and 13.

"We made decisions based on wanting to make sure that we can produce offence as we go forward, absolutely," Schuler said.

Goaltenders Shannon Szabados of Edmonton, Genevieve Lacasse of Kingston, Ont., and Ann-Renee Desbiens of Malbaie, Que., have known since May they will be going to Pyeongchang.

But they will continue to compete for coveted starts at the Winter Games, which open Feb. 9.

Agosta, who will be a four-time Olympian, is the lone member of the team that won gold in 2006 in Turin, Italy.

Among the players selected to the Olympic team for the first time in their careers, forward Jill Saulnier of Halifax said she burst into tears when told she's wear the Maple Leaf.

"It was emotional," she said. "I haven't been sleeping at all, just thinking about this moment."

Saulnier, 25, wasn't named to Canada's world championship roster in 2017, so she arrived in Calgary knowing she had to play herself up Hockey Canada's depth chart.

"I let that propel me forward and motivate me that much more to be here holding my jersey today," she said.

Defender Brigette Lacquette of Mallard, Man., and Bailey Bram of St. Anne, Man., also received good news four years after they were among the last cuts from the 2014 team.

"Having all the hard work pay off, it's definitely very special for me," Lacquette said.

Canada went 5-1 against the U.S. in a six-game pre-Olympic series, but lost twice to the Americans in November's Four Nations Cup in Florida.

The Canadian women have played a regular schedule of games against male midget triple-A teams and have five remaining in January before departing for Pyeongchang.

After a short holiday break, the women return to Calgary on Dec. 28 to continue preparations.