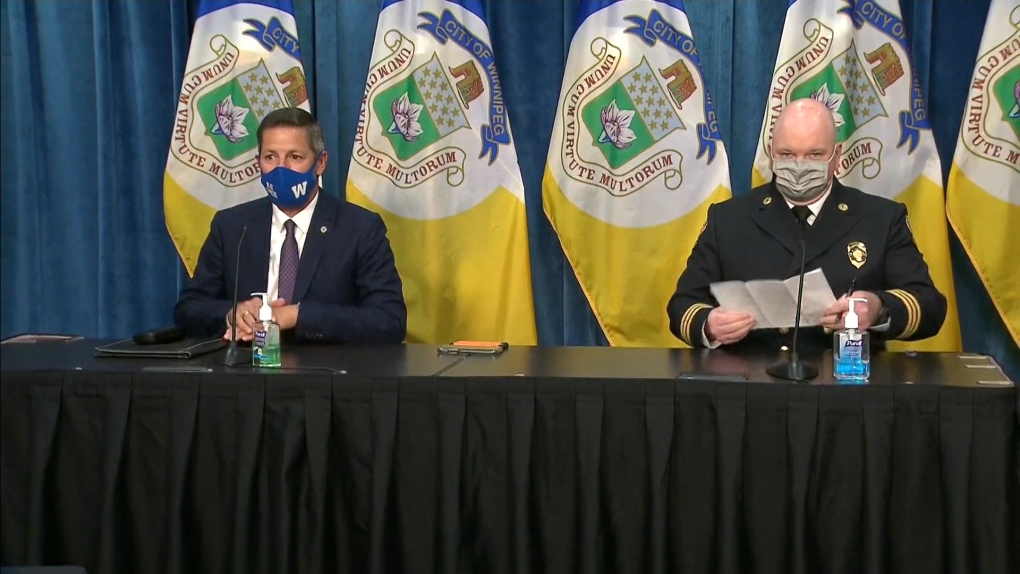 Winnipeg Mayor Brian Bowman (left) and Jay Shaw with the City of Winnipeg's Emergency Management Department, wear masks before holding a press conference at City Hall on August 28. Starting Aug. 29, masks will be mandatory on Winnipeg Transit buses and in city-operated facilities.

WINNIPEG -- The City of Winnipeg announced that starting on Saturday, Aug. 29, masks will be required when entering city-operated facilities or when using city vehicles, including Winnipeg Transit and Winnipeg Transit Plus.

The city said it made this decision to help stop the spread of COVID-19, and noted it is not a replacement for handwashing or physical distancing.

It noted that public health officials have increasingly recognized masks as a form of protection against the spread of COVID-19, especially in situations where physical distancing is a challenge. The city said its decision is keeping with this recognition and came about due to the recent increase in cases.

"We know a lot of students do and will be taking Winnipeg Transit to get to and from school," Mayor Brian Bowman said, the city expects more people to be taking transit and using city facilities, which may make physical distancing more difficult.

Jason Shaw, manager of the city’s Emergency Operations Centre, said transit ridership levels have increased to about 50 per cent compared to where levels were before the pandemic hit in March.

He said this, along with rising cases of COVID-19 in the city, prompted the city's mandatory mask decision.

"We've got increased ridership, we're about to go into a busier season, and we've got more COVID in the City of Winnipeg – there are multiple factors like that," he said.

Bowman thanked Manitoba Health for their collaboration in the decision.

"I'm expecting by and large, Winnipeggers are going to do their part, like we've seen throughout this pandemic," he said.

City workers will tell those who aren’t wearing a mask that it’s required, but people will not be denied service if they refuse to wear a mask.

The city noted its main objective is education, but transit riders could face a $100 fine if they do not comply. Shaw said transit drivers will not be responsible for enforcing this rule.

If the non-compliance is widespread, the city may consider adding enforcement measures.

"Wearing a facemask can make a difference," Shaw said. "We're asking Winnipeggers visiting our facilities and using public transit to do their part and wear a facemask to protect our most vulnerable residents."

In a report, the public service is asking for an over-expenditure of $325,000, which will be considered at an emergency city council meeting on Monday, Aug. 31. These funds would go towards the purchase of face masks and the public awareness campaign.

The city expects it will provide masks to the public for about two weeks, or until supplies run out, so people can get familiar with the new rules.

The city will make single-use, disposable face masks available at its public facilities where masks are required, such as city hall, recreation and leisure facilities, and libraries, as long as supplies last.

Currently, there’s a limited number of face masks at city facilities where masks are required, as well as at transit kiosks and libraries for those using transit. Upon the council’s approval, more will become available.

The city asks Winnipeggers not to judge anyone who is not wearing a face mask.

"I just ask that everyone be patient with each other as we transition to this new requirement," Bowman said. "We don't want to see shaming of folks who are not wearing masks – there are unique needs that result in someone not wearing a mask."

The CAO has the authority to mandate masks at city facilities, while the director of Winnipeg Transit has this authority for city vehicles.

-With files from CTV's Jeff Keele and Danton Unger.