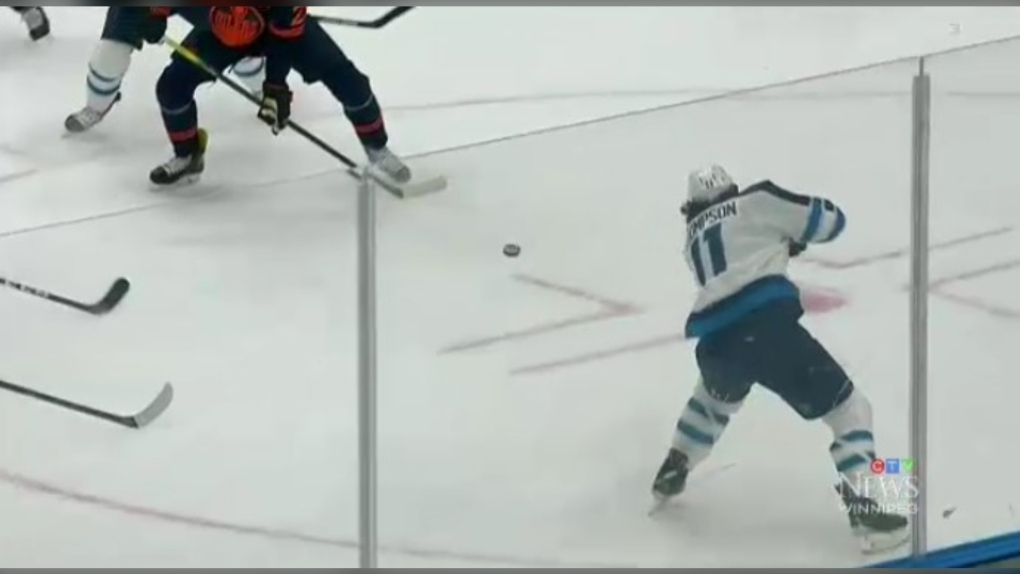 The all-Canadian race grew tighter Thursday as McDavid and the Edmonton Oilers topped the Winnipeg Jets 2-1. With 40 points, the Oilers (20-13-0) moved into a tie with the Toronto Maple Leafs for top spot in the division.

The Jets are just two points behind with 38.

"It's kind of a playoff mentality already," McDavid said. "I think it'll continue that way throughout. Everyone's kind of in the race. A couple of off nights and it tightens up really quick. So you need to be on your game each and every night."

The Oilers captain was on his game Thursday, tallying both of Edmonton's goals. Defenceman Tyson Barrie notched a pair of assists.

McDavid's game winner came midway through the second period, just 38 seconds after Mathieu Perrault put away the equalizer for Winnipeg (18-10-2).

Edmonton got a 2-on-1 breakaway, with Neal Pionk trying to corral both McDavid and Ryan Nugent-Hopkins as they sprinted into Winnipeg territory.

McDavid controlled the puck and looked poised to dish it off to Nugent-Hopkins but instead snapped a shot in past Jets goalie Laurent Brossoit for his 20th goal of the year.

Thursday extended his point streak to eight games, with six goals and 12 assists across the stretch.

"(McDavid's) the most explosive player in our league for a reason. And you saw that tonight," said Jets centre Mark Schiefele. "You give him a little bit of space and he's going to make you pay and he's going to make the teammates around him better. So it's something you always have to be aware of when you're playing against him."

While McDavid's ability to create offence is "off the charts," what Oilers coach Dave Tippett has liked best about his team's marquee centre this season is his determination to defend.

"Our whole coaching staff talks about it every day, how much he's dug in to playing a real winning style of game," Tippett said. "You notice the great things he does in the game offensively but he's a solid, dependable player in our own zone and he doesn't get enough credit for that."

The entire Oilers bench had to be defensively sound in the third period Thursday in order to defend its 2-1 lead and preserve the win.

Winnipeg made a late push and pulled Brossoit in favour of the extra attacker.

Nugent-Hopkins put away an empty netter with just over a minute on the clock, but Winnipeg challenged the goal as being offside. After a lengthy video review, the officials agreed.

Both sides reset and Edmonton goalie Mikko Koskinen withstood a late barrage to seal the victory. He stopped 24-of-25 shots on the night and Brossoit registered 19 saves for Winnipeg.

The Oilers have learned how to play with the lead, Koskinen said.

"We didn't do anything stupid, like we didn't take any stupid risks there," he said. "We just put the pucks deep and we kept the chances really short and we had the energy for the full 60 minutes there."

The key to coming away with a win in such a tight contest is to stick with it, Tippett said.

"You try to give up as little as you can," the coach said. "And fatigue becomes a factor, but you try to muscle through as best as you can. And when you get a lead, you just try to muscle it through and get it to the end. And that's what we did."

Both teams were on the tough end of back-to-backs, with the Oilers coming off a 7-3 win over the Flames on Wednesday and the Jets having topped the Canadiens 4-3 in overtime the same night.

The packed schedule and the fact that both teams had to travel after Wednesday's games took the "silkiness" out of Thursday's contest, said Jets coach Paul Maurice.

"They were one goal better than we were tonight and I think that's about all you can say about the game," he said. "We cracked a couple of posts, they had some good chances. It was hard fought, I think well played but not smoothly played."

The Oilers and Jets will meet again in Edmonton Saturday for a rematch.

This report by The Canadian Press was first published March 18, 2021.