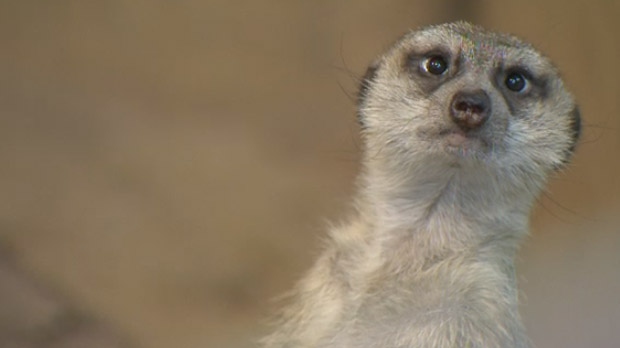 One of Assiniboine Park Zoo's five meerkats glimpses towards a CTV News camera.

A new gang of four eligible meerkat suitors has arrived at Assiniboine Park Zoo, setting the scene for what can only be described as "meerkat bachelorette."

The lone female of the zoo’s pack, Francine,13 , lost her mate earlier this year.

Zoo officials wanted her to have some company and possibly find another mate.

So four males, 4-year-old brothers named Eduardo, Bentley, Aranos and Andulo, were brought in from Calgary.

“These guys are really, really active,” said Lianne Thompson, a zookeeper with Assiniboine Park Zoo. “So they’re fun to watch, constantly kind of digging around in the dirt, climbing up on rocks, and if you don’t get to actually see them moving around, then the five of them are pretty well known for also sleeping in this big ball of meerkat adorableness.”

Thompson said the new meerkats were introduced to Francine in a couple of stages, starting with Andulo, who might be a frontrunner to get the bachelorette’s rose.

“They got along super super well,” said Thompson, adding that the other three were introduced within an hour.

“The intros can kind of be notoriously difficult, where meerkats will either decide to get along, or decide that they are not, so it was really good to see that ours got along well.”

Thompson said on the first day two of the brothers got into a bit of a fight that may have been triggered by the new territory or female to compete over, but it wasn’t long before things smoothed over.

“By the end of the day one, all five of them were sleeping together,” she said.

The zoo's meerkats are part of a species survival program, and the males were specifically selected based on their genetics.

With files from CTV's Megan Benedictson