MLA to remain in caucus after nude photo shown to assistant 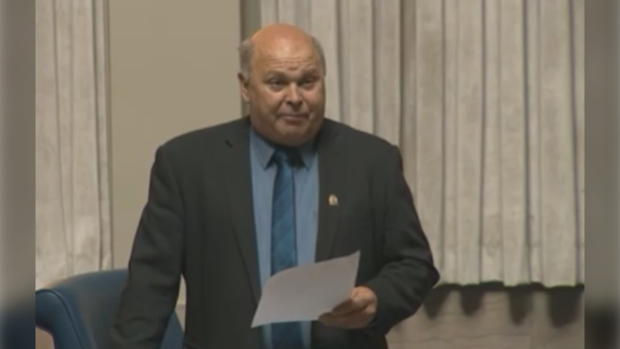 A Manitoba member of the legislature investigated for showing his assistant a picture of naked women and making inappropriate remarks is to remain in the governing Progressive Conservative caucus.

Rick Wowchuk, who was re-elected in Swan River in last week's election, was found to have breached the Manitoba legislative assembly's respectful workplace policy five times.

Breaches also included calling his constituency assistant while he was in the bathtub and making comments about her wearing a bikini.

Tory caucus allowed Wowchuk to run under the Progressive Conservative banner after being aware of the outcome of the investigation. He easily won his seat with 69 per cent of the vote.

His Progressive Conservative membership was reaffirmed on Wednesday when caucus reconvened for its first full meeting since the election.

Caucus chairman Wayne Ewasko would not give details about the decision saying, "what happens in caucus stays in caucus."

"My personal opinion is Rick ran a fantastic campaign in Swan River and was elected to represent those people in Swan River. So, I welcome him as part of the team," Ewasko said Wednesday.

CBC News reported days before the Sept. 10 vote that Wowchuk's assistant, who was not named, said the politician made a joke leading her to believe there were animal photos on his cellphone before he showed her a picture of naked women holding chainsaws.

Wowchuk apologized following the revelations, saying he took responsibility for his actions and was sorry for any offence it caused. He added that he had participated in workplace sensitivity training.

Opposition NDP Leader Wab Kinew declined to comment but said the victim should not be forgotten in these discussions.

"I hope that person is made whole throughout all of this."

The Progressive Conservatives implemented a "no wrong door'' policy in 2018, after several women made allegations that former NDP cabinet minister Stan Struthers tickled and groped female staff or made sexual remarks.

Months later, Tory Cliff Graydon was ousted following reports that he had invited two women on separate occasions to sit on his lap, and invited one woman to lick food off his face. He ran as an Independent in the election but, achieving 10 per cent of the vote, lost his seat to Tory newcomer Josh Guenter.

Tory candidate Nic Curry decided not to run after he also faced allegations of inappropriate behaviour.

This report by The Canadian Press was first published Sept. 18, 2019.