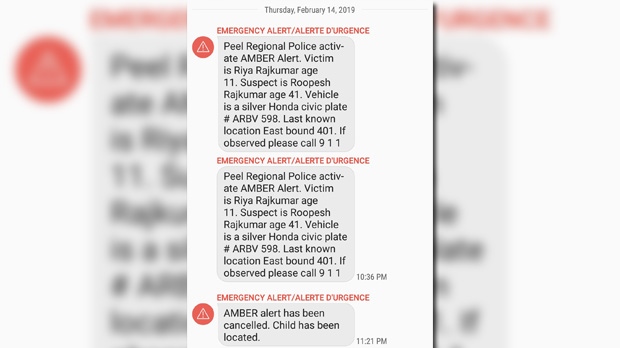 A screen grab of the Amber Alert that went out in Manitoba.

Call takers with the Winnipeg Police Service 911 Centre were kept busy with calls related to an Amber Alert issued Thursday night, some of whom came from people complaining about having received the alert.

The Amber Alert was issued by Peel Regional Police after the father of Riya Rajkumar, 11, didn’t return her to her mother.

Her body was later found, and police said Friday that they intend to charge the father, Roopesh Rajkuma, 41, with first degree murder.

Winnipeg police said Friday its emergency call takers were tied up with calls over the Amber Alert, “potentially preventing legitimate emergency calls from getting through.”

It reminded people that the you can’t opt out of the Alert Ready system that delivered the Amber Alert over compatible wireless devices, and that the messages it delivers are critical and potentially lifesaving.

Police said if you get a message that isn’t relevant to you, then ignore it, and if it is relevant, take action. They said do not contact police unless the alert directs you to.