DAUPHIN -- After days of calling for answers from the government, tensions boiled over in the City of Dauphin, as frustrated residents poured down Main Street chanting to save the Dauphin Correctional Centre.

More than 300 residents joined in on the march and rally held in front of the jail that is set to be closed by the province in May.

“Reverse the damn decision to close the jail,” an irate Michelle Gawronsky, president of the Manitoba Government and General Employees’ Union yelled on Tuesday night.

The march, which was organized by the MGEU, comes after a community town hall on Monday night that was meant to answer questions, but instead left many frustrated and angry.

At the rally, some residents were calling for the resignation of Dauphin’s MLA Brad Michaleski for a comment he made during the town hall meeting, saying the province was making tough decisions and he was okay with that.

“I’m okay with tough decision making because I know it’s part of successfully building something bigger and better in Manitoba,” Michaleski said on Monday.

It’s a comment that stuck with Dauphin resident Dianne Medwid.

“It was awful, very uncaring,” Medwid said, who added she just wants the new jail built along with a healing centre.

“Just the way the government has handled this whole thing, in such a callous and uncaring way to find out that you’re going to lose your job - I can’t even believe it,” said Kate Polloway, another Dauphin resident at the rally.

While no representatives from the province were in attendance at the rally, opposition leader Wab Kinew, and Liberal leader Dougald Lamont both spoke, condemning the province’s decision to shutter the jail.

Chris Geisel, MGEU Dauphin Jail Local President, said it makes no sense for the province to shut down the Dauphin jail, moving inmates and correction workers further away from their community, just because a building is too old. 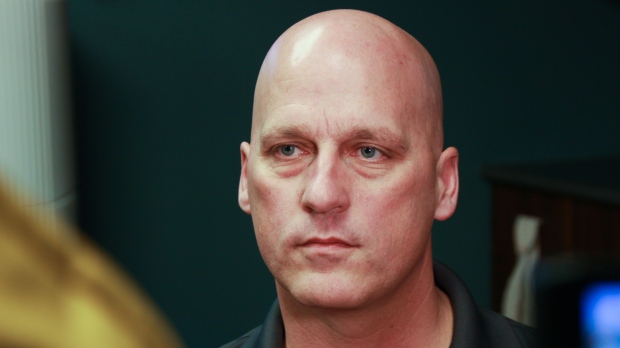 “I’m hoping the government is listening to us and will reverse this decision. I hope they can see the impact this can have on families like mine, and the entire region,” Geisel said.

Geisel said losing 80 jobs in Dauphin is the equivalent to losing 8,000 jobs in Winnipeg.

“I had to watch helplessly as my co-workers’ lives were turned upside down by one small life-changing sentence - the jail is closing May 29.”

PROVINCE MAY PUSH BACK JAIL’S CLOSURE

In a written statement to CTV News, a spokesperson for Manitoba Justice said there would be some flexibility on the date of the closure, which may be pushed back to June.

The spokesperson said the government will be working with local municipal leaders to address the community’s concerns.

The R.M. of Dauphin has said it will be writing a letter to Manitoba Premier Brian Pallister that summarizes the community’s questions and concerns.

The R.M. is now calling on both the provincial and federal government, as well as the Association of Manitoba Municipalities, to participate in regional consultation meetings immediately.

Inside the rally for Dauphin jail

Inside the rally for Dauphin jail