Bankruptcy rates climbing in Manitoba; what areas of the province are hardest hit?

Bankruptcy rates climbing in Manitoba; what areas of the province are hardest hit?

As prices on everything continue to rise across the country, more Manitobans are filing for bankruptcy according to new data from the federal government.

The second quarter report in 2022 for insolvency statistics in Canada shows Winnipeggers over the last three months have been filing for bankruptcy more compared to the previous quarter by nearly 47 per cent.

It is even higher for the province as a whole as Manitoba sits at 50 per cent.

Winnipeg and Manitoba's numbers are significantly larger than the national average of just a nine per cent increase from last quarter and last year dropped by 11.1 per cent. 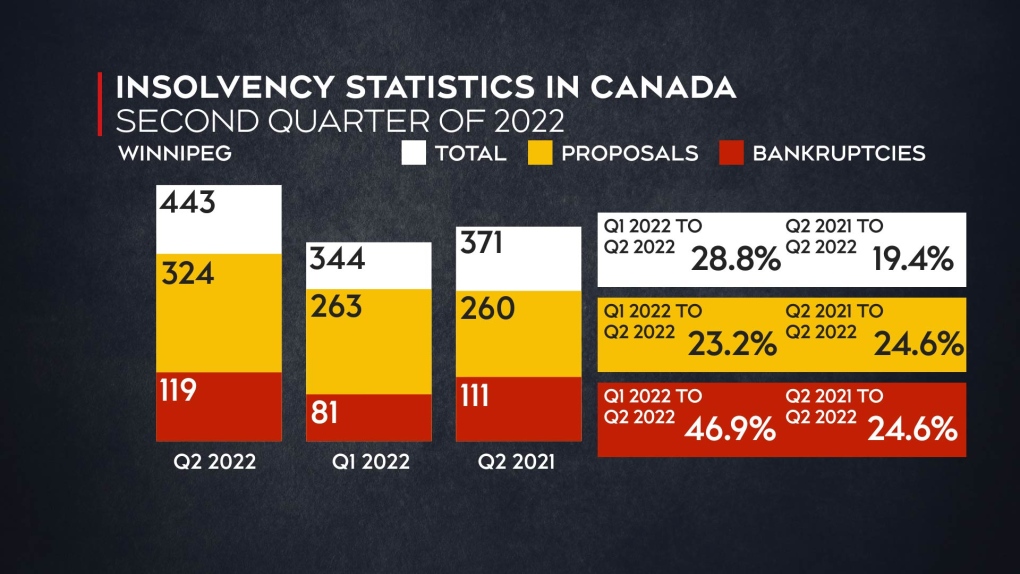 Brad Milne, a licensed insolvency trustee based in Brandon, said these numbers show Manitoba is getting back to pre-pandemic levels.

"When you look at 2019 to 2020, in Manitoba, the filing numbers actually decreased by about 20 per cent and then the subsequent year they decreased by another one per cent," said Milne. "Canada saw a larger decrease in that filing period, approximately 37 per cent."

He said numbers decreased because the government stepped up with emergency benefits, collection agencies weren't calling people and Canadians didn't spend money because there was nothing to spend money on.

Debt proposals have also seen a jump in the province and in Winnipeg.

The government says a proposal is "an offer to creditors to settle debts under conditions other than the existing terms. A proposal is a formal agreement under the Bankruptcy and Insolvency Act."

In Manitoba, proposals are up since last quarter by 15.2 per cent and 17.3 per cent compared to this time last year.

Those numbers are even higher in Winnipeg; 23.2 per cent compared to last quarter and 24.6 per cent since quarter two of 2021.

Proposal numbers are a little closer for all of Canada, up 9.3 per cent from last quarter and up 20.6 per cent since last year.

"Now as we emerge in 2022 out of that, the benefits are pretty much over, people are resuming their normal activities, collection agencies are back doing their thing, and so we're almost going back to, in my opinion, to our normal ways."

Milne said it is unusual to see such a large change in Manitoba compared to the national average.

He recommends people review their finances every month and look at areas where they can cut costs.

BREAKING DOWN EACH REGION IN MANITOBA - SOUTHEAST

In the southeast part of the province, bankruptcies numbers are up 62.5 per cent since last quarter, going from 8 filings to 13, but since last year, they are down 45.8 per cent. 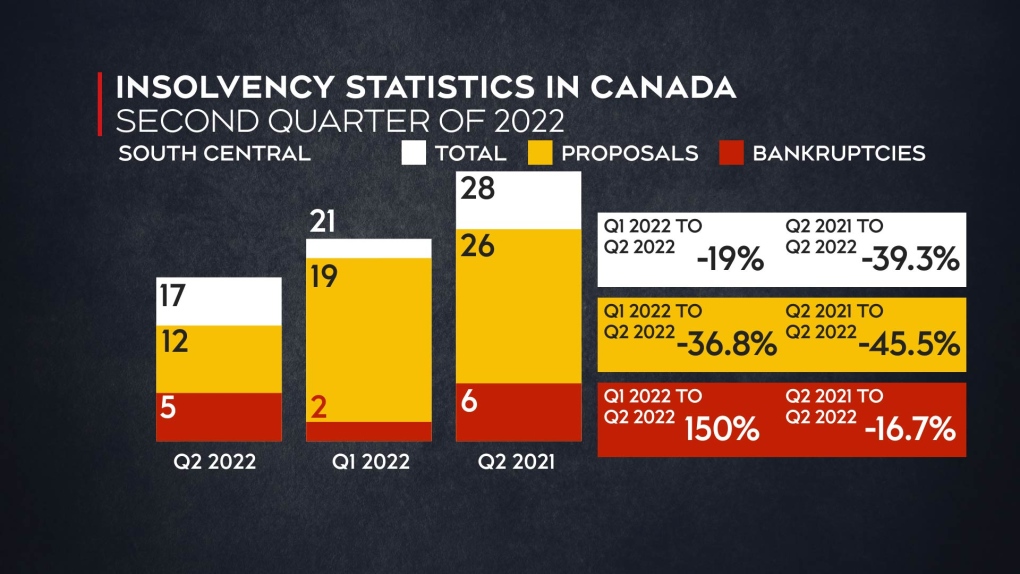 The bankruptcy percentage seems worse than the actual filings. The area is up 150 per cent quarter to quarter but that is going from two filings in quarter one to five in quarter 2.

The year-over-year number only went down by one filing.

Bankruptcies were up 56.3 per cent in the southwest region going from 16 last quarter to 25 this quarter, but year-over-year is less at just 25 per cent. 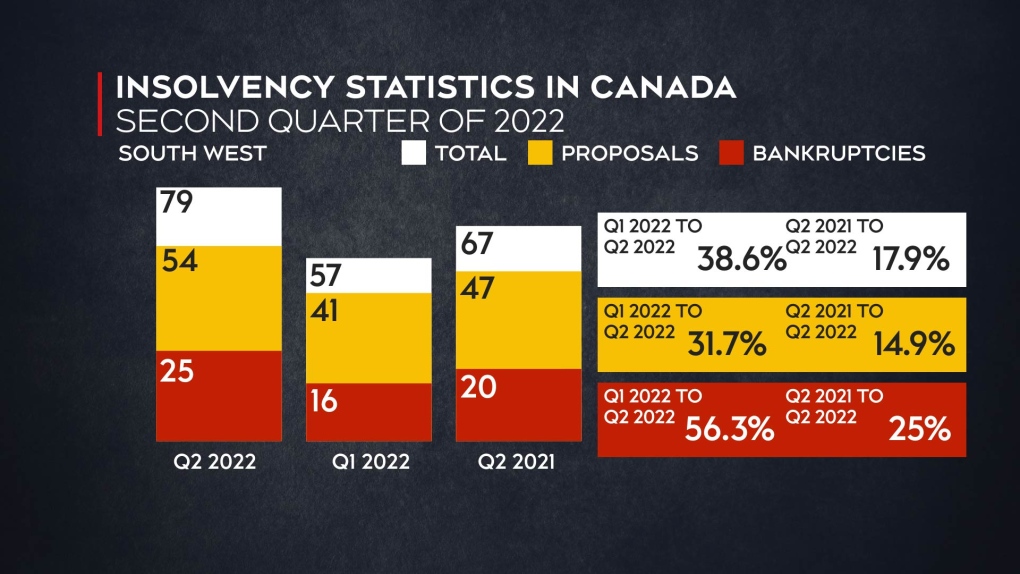 The north-central region has been stable quarter to quarter when it comes to bankruptcies with no change in the number of filings – three each quarter.

There has also been a decrease of 62.5 per cent from 2021, when there were eight filings.

The Interlake saw a jump in bankruptcies in the second quarter going from four to nine, but still a drop from last year at 13 filings. 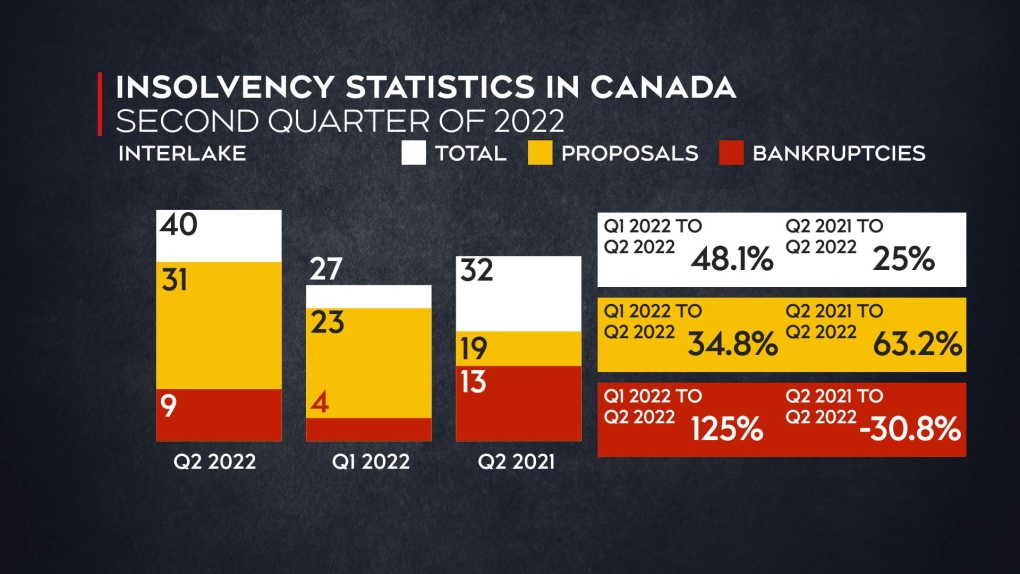 The Parklands' numbers were marginal, with two bankruptcy filings last quarter and five in quarter two. However, it's still a decrease from last year when there were eight.

In the north, bankruptcy dropped from six to three and only four declarations were made in 2021.

As Atlantic Canadians grapple with the aftermath of destruction caused by Hurricane Fiona, CTVNews.ca takes a look at major hurricanes that have wreaked havoc in the country throughout history.

International students' visa backlog due to an outdated system: lawyer

An ongoing Canadian immigration backlog of 151,000 applications has left many international students at risk of missing their fall semesters altogether. One lawyer blames the ‘one-size-fits-all-approach’ of Canada’s immigration system.