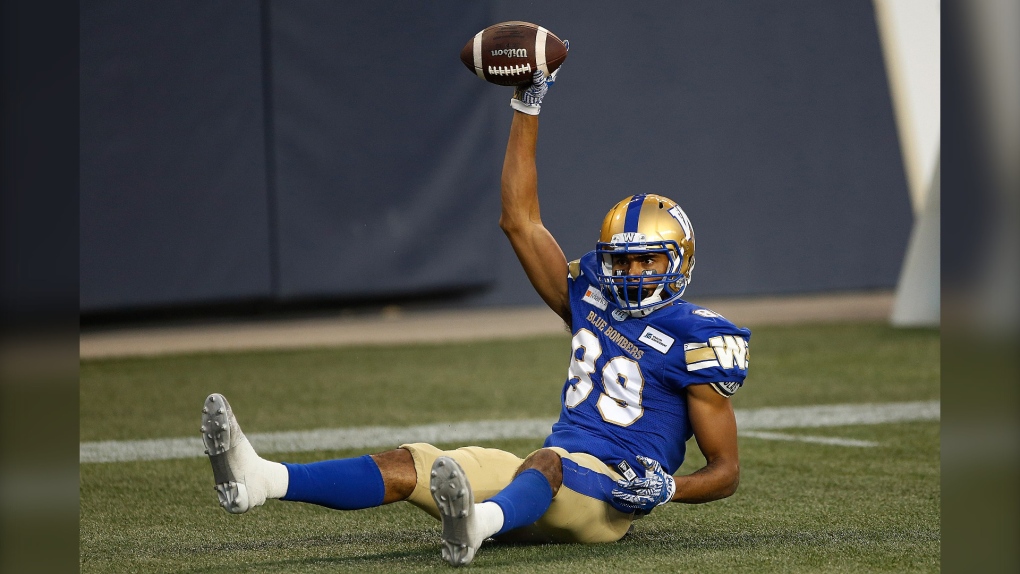 Kenny Lawler heard the cheers of 29,376 fans as the Blue Bombers receiver caught a pair of touchdown passes from Zach Collaros to propel Winnipeg to a 19-6 victory Thursday over the Hamilton Tiger-Cats in the 2021 CFL season-opener.

The game marked the largest crowd at a sporting event in Canada since the COVID-19 pandemic swept around the world last year and cancelled the 2020 CFL season. This season is shortened from 18 to 14 games.

The fully vaccinated fans at IG Field were pumped for the rematch of the last league game held 620 days earlier, a 33-12 Grey Cup victory for the Bombers over the Ticats on Nov. 24, 2019, in Calgary that ended Winnipeg's 28-season championship drought.

Prior to kickoff, the Bombers played a video of highlights from their championship run -- the franchise's first title since 1990 -- and unveiled their Grey Cup banner while RCMP officers held the trophy on the field.

It was a bonus celebration for jubilant fans, who were allowed to fill the stands after showing proof of their double vaccinations and didn't have to wear masks.

"It's just super fun and it's been a long time coming," said Adam Johnson, 41, who was sporting a Bombers jersey and no mask in a crowded concourse at halftime. "When they announced about a month ago that they were going to go full capacity, no masks, I think a lot of people jumped on it."

Collaros completed 18-of-28 pass attempts for 217 yards, two touchdowns and no interceptions.

Hamilton pivot Jeremiah Masoli was playing in his first game since late July 2019, when he suffered a torn anterior cruciate ligament in a Week 7 game against the Bombers. He was 24-of-41 for 242 yards, one TD and two interceptions.

Winnipeg's scoring came from Lawler's TD catches of 25 and 28 yards. New Bombers placekicker Tyler Crapigna, signed last month after being released by the Montreal Alouettes, made his two convert attempts and connected on a 15-yard field goal. Hamilton also conceded a safety.

Ticats receiver Jaelon Acklin had a 37-yard TD reception. A two-point convert attempt was no good.

The Bombers were missing star running back Andrew Harris (calf). He was replaced by fellow Winnipeg native Brady Oliveira, who rushed 22 times for 126 yards.

Winnipeg led 7-6 after the first quarter and 14-6 at halftime.

Hamilton scored on its first possession after Masoli connected with Acklin in the end zone at 4:43. The 89-yard drive was aided by a 23-yard catch by Brandon Banks, the reigning CFL most outstanding player. Masoli couldn't connect with Marcus Tucker for a two-point convert pass.

Lawler caught his first TD in the end zone at 12:09 of the first quarter. Receiver Nic Demski had boosted the 79-yard drive with a 49-yard catch-and-run gain.

Lawler then hung onto a 28-yard pass in the end zone at 13:41 of the second quarter. Collaros had kept the drive alive with an 18-yard run and slide on second-and-six.

Hamilton conceded a safety at 6:58 of the third as Winnipeg's defenders turned up the heat and boosted the lead to 16-6.

Crapigna capped off an 11-play, 71-yard drive with his field goal at 7:40 of the fourth quarter.

This report by The Canadian Press was first published August 5, 2021.

Russian President Vladimir Putin insisted Saturday that European nations halt sanctions on his country and weapons shipments to Ukraine, where Moscow claimed its forces had captured another eastern city as they fought to seize all of the contested Donbas region.