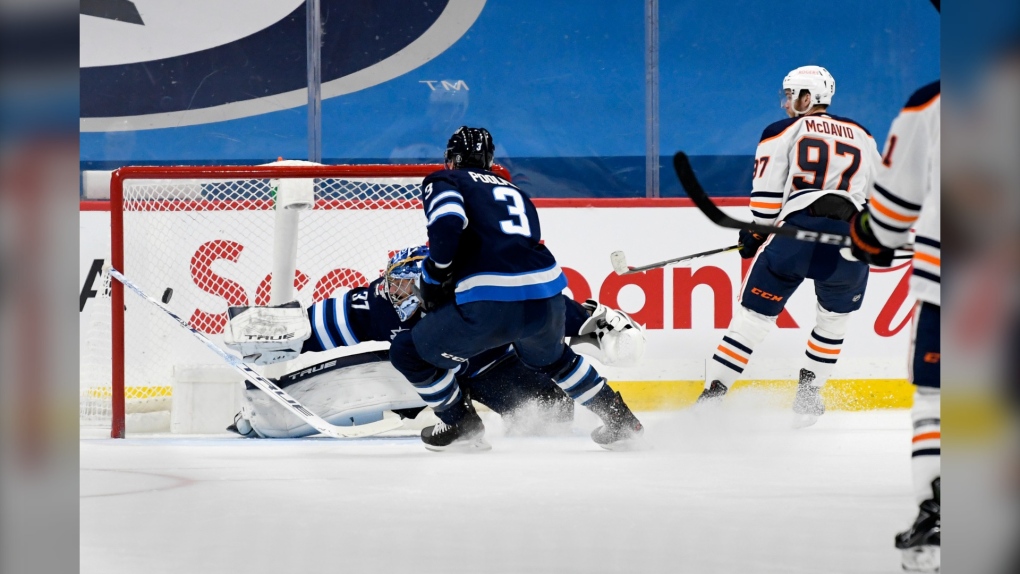 WINNIPEG -- Connor McDavid and the Edmonton Oilers made another statement Monday.

The Winnipeg Jets, meanwhile, continued their search for answers.

McDavid scored his third hat trick of the season and added an assist to give him an NHL-best 81 points as the Oilers dismantled the Jets 6-1 to leapfrog their rival for second place in North Division.

The Oilers captain, who became the first player to crack the 80-point plateau through 46 games of a season since Mario Lemieux in 1996-97, is on pace to record 99 points in the league's pandemic-shortened campaign with 10 dates left on Edmonton's schedule.

So what does chasing the century mark mean to hockey's best player?

"Not a ton," said McDavid, whose team has won five straight against the Jets and improved to 6-2-0 versus Winnipeg in 2021. "We want to play good, team hockey down the stretch.

"That's the most important thing."

The Oilers certainly did that on this night, embarrassing an opponent they'll likely see in the first round of the playoffs.

"You want to leave a mark," Leon Draisaitl said after adding a goal and an assist. "You want to show them that we're ready to go."

Alex Chiasson and Darnell Nurse also scored for Edmonton (28-16-2), which leads Winnipeg by a point in the standings with two games in hand. Mike Smith made 36 saves.

Asked about McDavid, who registered the ninth hat trick of his career, Draisaitl seemed to run out of adjectives for a teammate with 19 points in eight outings against the Jets.

"Sky's the limit," said Draisaitl, a distant second in the scoring race with 66 points. "He shows it every night.

Draisaitl also had a banner night, becoming the highest-scoring German in NHL history with his 488th point to pass Marco Sturm.

"It's a big honour," he said. "To lead that list is very special to me. I take big pride in that."

Sloppy with the puck at crucial moments, the Jets dropped a fourth straight game in regulation at Bell MTS Place, the team's longest home losing streak since a five-game slide from Dec. 17, 2019, to Jan. 12, 2020.

"We feel like we've got a good hockey team in there and that we're not playing up to our potential," Winnipeg forward Andrew Copp said. "There's no way around it. There's no easy fix.

Connor Hellebuyck allowed six goals on 23 shots through two periods before getting replaced by Laurent Brossoit, who finished with seven saves in relief.

Coming off a 4-1-0 road trip, Winnipeg began its current five-game homestand with a 3-0 loss to Edmonton on April 17 before 5-3 and 4-1 losses to first-place Toronto on Thursday and Saturday. The Jets and Oilers will conclude their regular-season series on the same sheet of ice Wednesday.

"We missed the gear change coming off the road," said Winnipeg head coach Paul Maurice, whose team has scored just six times in its last five games against Edmonton. "We had four of those pucks (on goals against), we need to make a decision based on the game that is being played now, not the game that was played two weeks ago.

"So that gear change happened and it's happened with the two teams ahead of us in the standings in the division, and tonight it blew up on us."

Already minus centre Adam Lowry (head), Maurice announced before the game his team will be without 21-goal man Nikolaj Ehlers (upper-body injury) for the remainder of the regular season following a third-period collision Saturday with Leafs defenceman Jake Muzzin.

Playing just their fourth game in 16 days because of COVID-19 scheduling changes, the Oilers took the lead with 3:38 left in a fast-paced first on a sequence that started when Draisaitl won a battle behind Winnipeg's net. He fed a pass in front to Adam Larsson, who quickly found Chiasson to one-time his eighth goal of the season past Hellebuyck.

The goal was Chiasson's fourth against the Jets in 2021, and the 100th of his NHL career.

Edmonton doubled its lead with 1:29 remaining in the period on an odd-man rush after Winnipeg turned the puck over at the offensive blue line. Tyson Barrie -- playing his 600th NHL game -- funnelled a shot towards Hellebuyck that took a deflection and landed on McDavid's stick for him to bury his 26th.

Hellebuyck stopped McDavid on a breakaway early in the second, but the Oilers captain sped down the wing later in the same shift, faked a shot and slid the puck between the Winnipeg goaltender's pads for his 27th at 3:38.

Draisaitl then made it 4-0 at 11:40 when he scored his 23rd on a 2-on-1 with Ryan Nugent-Hopkins after Derek Forbort turned the puck over.

Nurse continued the onslaught at 13:18, finishing off a passing play with McDavid and Jesse Puljujarvi for his 14th.

Scheifele, who was benched for 17 minutes of game action Saturday, got one back for the home side on a power play with his 19th at 15:06.

But McDavid completed his hat trick just 1:24 later by intercepting a Kyle Connor pass and moving in alone on Hellebuyck -- the speedster had time to look over his shoulder to check for any pursuing Jets he'd left in his dust -- before scoring his 28th on a slick deke.

"We've played some good hockey," said McDavid, who trails only Leafs star Auston Matthews in the NHL goal race. "We've played all types of games. I thought our series against Montreal was hard-nosed, hard-hitting. Tonight we showed a bit of a different game.

"We're confident, as we should be, moving forward."

This report by The Canadian Press was first published April 26, 2021.