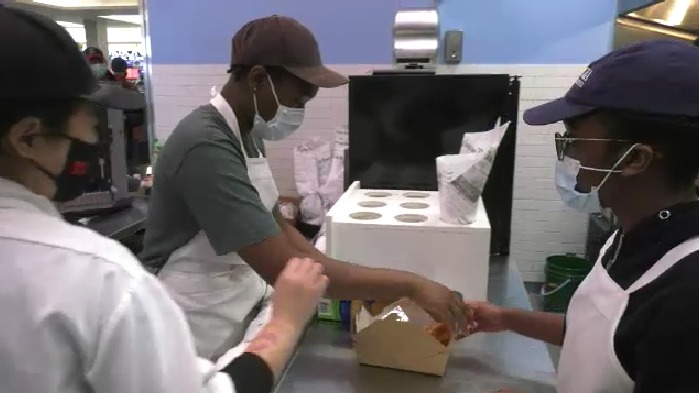 All three locations of Fergie’s Fish’n Chips in Winnipeg donated some proceeds of the day’s sales to BGC Winnipeg, formerly known as Boys and Girls Clubs of Winnipeg.

The money is earmarked for the organization’s Lead Up initiative, which is a youth leadership volunteer program.

“The youth will be able to spend it on some programming but also, because they are a service youth program, they want to give back to Boys and Girls Clubs so they are going to make sugar cookie packages that kids can either do at the club or take home with them,” said Heather Black from BSG Winnipeg.

The cookie kits will be a highlight for the younger kids in the program, according to eight-year BSG member Hannah.

“It’s going to be decorative stuff that you can use to decorate your own sugar cookie,” said Hannah. “It’s about being creative, making their own designs, which is always amazing to see with kids especially because they always come up with some funny stuff.”

The money wasn’t just handed over. BSG Winnipeg members put on aprons and hopped behind the counters to make some food and handle the tills.

The events were spearheaded by Fergie’s owner Gus Tsouras, who said every year they try to do something to help the community. This year they chose BSG.

“It’s a great organization and we hope to make it an annual event. We get the kids involved with a little bit of work experience and are able to give them back some dollars at the end of it,” said Tsouras.

A bonus for Tsouras was the efficiency of his temporary staff. He said within 15 minutes, they were handling themselves like professionals.

Health Canada is set to complete its reviews of the Novavax and Medicago COVID-19 vaccines 'in the coming weeks,' according to the agency's deputy minister. If authorized by the federal regulator, these vaccines would become the first COVID-19 vaccines to be made in Canada.