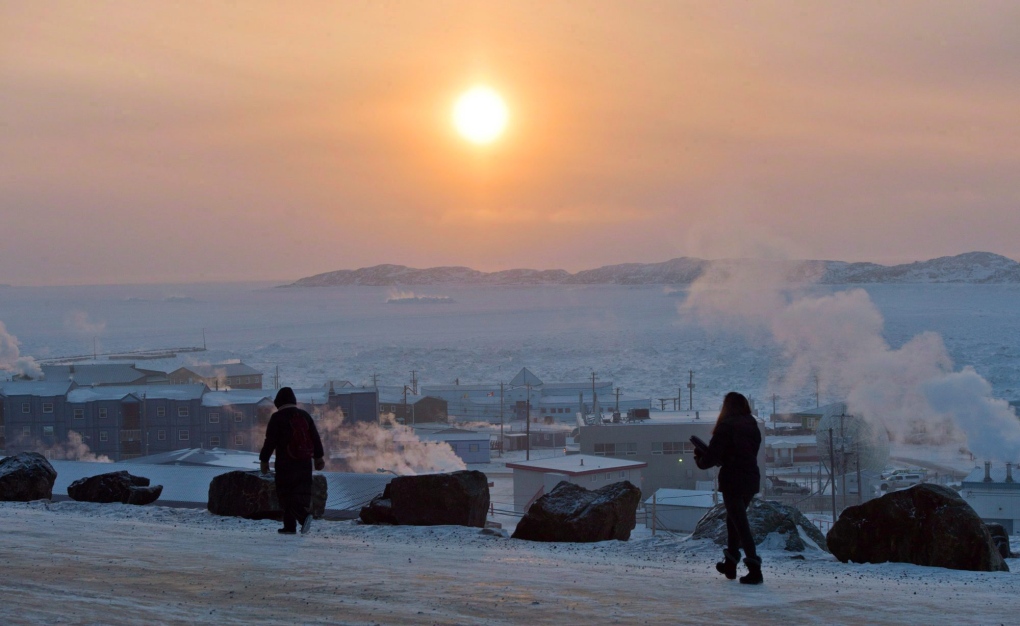 People walk along a path in Iqaluit, Nunavut on Tuesday, Dec. 9, 2014. (Sean Kilpatrick / THE CANADIAN PRESS)

Programs to help people adapt to climate change in a part of Canada where help may be needed the most are stuck in the ice, a study has concluded.

For more than a decade Inuit in Nunavut have been saying that the old ways for building, travel and hunting on the land no longer apply. But most of the recommendations from a plethora of plans and task forces remain just that.

"We haven't made as much progress as people would have liked or as is needed," said Jolene Labbe, the McGill University researcher, who conducted a survey recently published in NRC Research Press.

Labbe's study, based on public documents and interviews with officials, found 700 initiatives to help people adapt to climate change in Nunavut -- from community efforts to federally funded programs. She concluded that less than one-third have actually resulted in action.

The government of Nunavut has been hearing about changes for at least 15 years. Interviews in 2001 told of lakes and rivers freezing later and slower, sometimes cutting hunters off within sight of their game. Regular trails over the sea ice -- in use for generations -- had become unsafe.

Food cached in expectation of it remaining frozen had thawed and spoiled. Long-trusted signs of approaching storms weren't reliable.

Despite those stories -- and many more over the following years --Labbe concluded there is still little overall planning for climate change.

Colleen Healey, director of Nunavut's Climate Change Secretariat, has seen Labbe's survey and agrees with most of it.

"The reality is that adaptation is in its infancy," she said.

"They ultimately turned out to be plans for plans," Healey said. "They weren't something that could be picked by a mayor and implemented. They required you to go and get more money and hire more consultants."

Much of the work so far has been in skills training and education about the issue, said Healey.

More useful tools are starting to come, though, she said.

The territory is preparing permafrost maps to help people putting up homes or other buildings to get a precise idea of the likelihood of the ground beneath their feet melting away.

Gas stations offer free locator beacons for anyone heading out on the land. Hunters are being encouraged to carry three days of supplies in case of unexpected bad weather.

Scientists report that 2016 was the third year in a row to set a record for warmth globally. It's hard to overestimate the impact climate change is already having on northerners, especially those who have lived in the Arctic their whole life.

"We're hearing more and more stories about people not able to draw on their traditional knowledge," Healey said.

"That's really challenging -- to have, your whole life, trusted your gut instinct and your gut was based on decades and generations of knowledge passed down, then suddenly find out you can't rely on that.