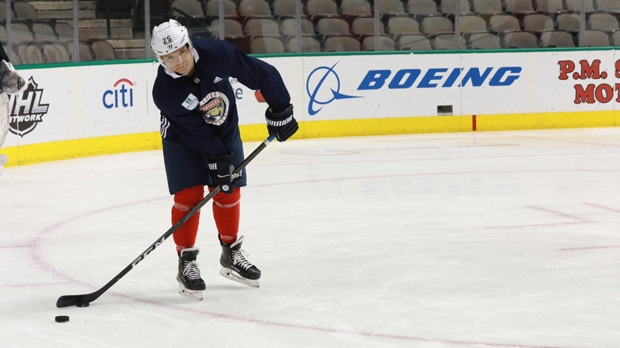 A defenceman and Manitoba Junior Hockey League veteran from Cross Lake, Man., has signed a two-year deal with the Florida Panthers.

Brady Keeper, 22, played 36 games for the University of Maine and led the team in goals, assists and points, the Panthers said while announcing the entry-level contract signing Monday.

Before that, he played in the MJHL for the Opaskwayak Cree Nation Blizzard, earning honours like top defencemen and most valuable player for the league in 2016-17.

“For him it’s a dream come true,” said Alfie Michaud, who coached Keeper in Maine.

Michaud told CTV News he developed a close relationship with Keeper and the two had a lot in common, as First Nations men from Manitoba who worked their way up through hockey ranks.

“I shared my experiences, what I was going to face when I left home at a young age to play junior hockey,” Michaud said.

He said Keeper struggled with homesickness at times but persevered.

“He’s got a very close family, and comes from a community that’s had their fair share of difficulties up there,” Michaud said, adding that when he first came to Maine, Keeper had to fight the urge to go home.

“His parents did a wonderful job in communicating to him to stick it out,” he said.

“You know, there was fear there. He missed his family, his friends, he missed what was comfortable.”

Michaud said Keeper stuck it out and adjusted to life as a student athlete.

“He got it going and he excelled here,” he said. “He’s a different human being when he’s on the ice. It’s very comfortable for him, and when he’s off the ice, he’s just a quiet, happy-go-lucky guy.”

Michaud said the University of Maine is losing its top scoring defenceman, and the sky is the limit for what comes next in his career.

“For me, it was almost like one of those proud uncle moments, that he’s moved on,” he said, calling Keeper a smart player who has the potential to catch up to the speed of NHL play.

“There are no words for how excited I am to be in the NHL. All the guys came up to introduce themselves and made me feel welcome. It’s amazing.” -Brady Keeper pic.twitter.com/i5fRLna9K7