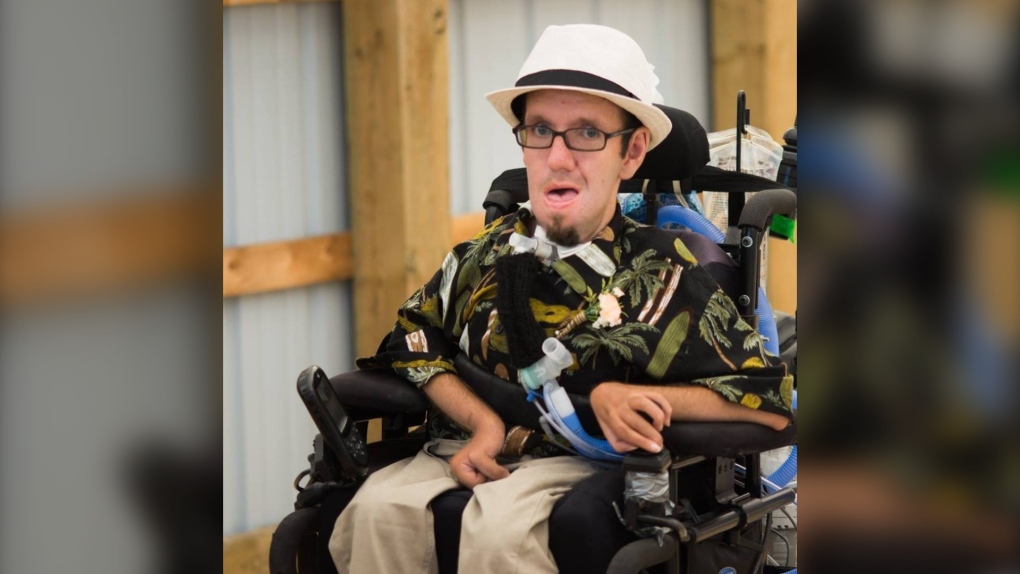 Cameron Slimmon has filed a human rights complaint against the Health Science Centre alleging staff wouldn't allow his caregivers to be with him in hospital. (Source: Cameron Slimmon/Facebook)

WINNIPEG -- A Winnipeg man has filed a human rights complaint against the Health Sciences Centre after he was allegedly told by staff that his caregivers couldn't stay with him at the hospital.

He said his caregivers help him communicate as they are very experienced and trained to understand his specific needs.

Slimmon went to HSC on Nov. 12 because of extreme dehydration and a urinary tract infection. He said everything was fine up until Nov. 16 when his caregivers and family members were denied access.

"As a result, I was forcefully placed in an extremely unsafe situation," he said in his human rights complaint.

When Slimmon was first admitted to the hospital, he was told visitors were not allowed to stay overnight but because of the circumstances, nothing would change for him.

Then by Nov. 16, he was told he wouldn't be allowed to have anyone overnight.

Slimmon alleges the justification for why his caregivers weren't allowed to stay wasn't clear.

"It was inconsistent and seemed like they were making it up as they went. First they said they had their own staff that could provide me the care that I needed," he said in an interview with CTV News.

"Secondly, they said we were not wearing proper masks, even though their website clearly stated one could be present with a non-medical mask."

He said hospital staff did give his caregivers N95 masks but then they were later told the masks weren't fitted properly and they weren't allowed to be there.

He added the messaging continued to become even more unclear as one day he was told he was allowed caregivers during the day, but not at night, and then the next he was told they weren't allowed at all.

"It was extremely frightening and frustrating and frankly traumatizing."

"I was denied the right to communicate my needs and therefore denied 100 per cent safe, adequate care."

Throughout his stay, Slimmon was left without his caregivers for around 20 hours.

At one point Slimmon alleges he was asking one health care aide for his nurse, but the aide couldn't understand him and thought it was a prank.

A spokesperson for Shared Health said in an email to CTV News that it can't comment on the specifics of the case but noted decisions are made every day due to the pandemic that aren't easy.

"Case-by-case exceptions will be considered and families and patients are encouraged to discuss their concerns with their care team or our patient relations department," the spokesperson said.

"While in-person visits may be limited, Health Sciences Centre Winnipeg is committed to supporting communication between the care team and designated support persons when caring for patients with unique needs."

Slimmon said it is important people understand that his caregivers are much more than just visitors in the hospital.

"They are an extension of my person in terms of communication and to support and enable my physical interaction with everything around me," said Slimmon.

He said because of what happened, he eventually discharged himself from hospital.

Slimmon added he has filed this complaint not only for himself but to help others as well.

"It has also unduly affected many other people. Action must be taken to prevent an injustice like this from happening again."

In an email to CTV News, Karen Sharma with the Manitoba Human Rights Commission said the process is confidential but if a matter can't be resolved through mediation then an investigation will occur to determine if a hearing is needed.

"In the meantime, and without commenting on the particular facts of this case, the Commission recognizes the urgency of ensuring that the rights of peoples with disabilities are upheld throughout the pandemic. We have been proactively calling upon all service providers to ensure that their approaches to managing the pandemic recognize the fundamental rights of all peoples to equality and non-discrimination," said Sharma.