MOOSEHORN, MAN. -- Manitoba Hydro and its utility partners plan to have power outages that hit more than 100,000 customers at the peak of the October storm restored by Friday.

Hydro spokesperson Bruce Owen tells CTV News of the 950 kilometres of power lines that were damaged, 810 kilometres have been repaired.

As of Wednesday, Owen said 1,000 customers still remain without power.

Crews from Manitoba, Minnesota, Ontario and Saskatchewan are focusing their efforts in the St. Martin area in the Rural Municipality of Grahamdale, about 2 hours north of Winnipeg.

'This is day 12,' says councillor in the dark

Jason Bittner is a councillor with the R.M. who lives in Hilbre, Man., just north of Moosehorn.

Bittner and his wife lost power Friday Oct. 11 around 9 p.m. and they’ve been in the dark ever since.

Bittner has a 6,000 watt generator and has been using it on a rotation to cook and keep warm. 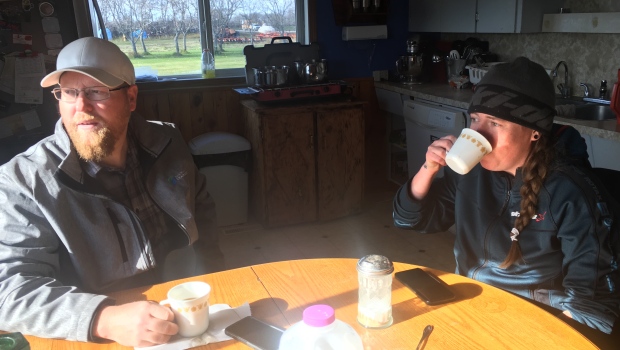 Bittner has been working with the R.M. to keep people informed and connected, helping residents who needed a generator fixed or a basement kept dry.

Restoration effort expected to wrap up by Friday

Owen said people will see teams working in and around Highway 6 and helicopters in the air.

The choppers are dropping hydro poles in hard to reach boggy spots. Crews are also using amphibious vehicles and specialized vehicles with tracks to access the troubled sites.

Owen said customers can expect to have the lights and heat back on by the end of the work week, possibly even sooner.