Jets suffer first loss in regulation in pre-season against Oilers 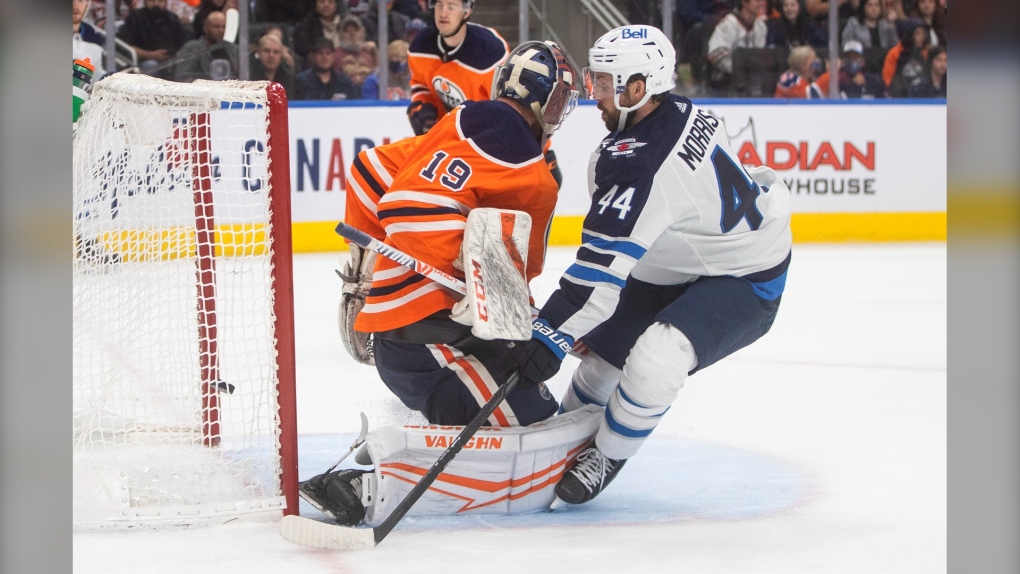 Jesse Puljujarvi had a pair of goals as the Edmonton Oilers snapped a two-game skid in pre-season play, defeating the visiting Winnipeg Jets 4-3 on Saturday.

Ryan Nugent-Hopkins scored the game-winning goal with 1:56 remaining in the third period to break a 3-3 deadlock. Devin Shore also scored for the Oilers (3-1-1).

Kyle Connor, Mark Scheifele and Josh Morrissey replied for the Jets (1-1-1), who suffered their first loss in regulation in pre-season.

Down 3-1 in the third, Winnipeg fought back to make it a one-goal game with 8:24 left as Declan Chisholm sent a pass through a defenceman's legs to allow a back-door tap-in by Scheifele.

The Jets then tied it up a couple of minutes later as Morrissey was left alone in front to bang home a pass from Evgeny Svechnikov.

Edmonton regained the lead with just under two minutes left in the game as Leon Draisaitl stripped a puck and then sent a long backhand pass through traffic to Nugent-Hopkins, who beat Eric Comrie for the winner.

The Jets took an early lead four minutes into the opening frame after the Oilers allowed an odd-man break on the tail end of their first power play. Edmonton goalie Mikko Koskinen was able to make an initial save on Kristian Vesalainen, but had little chance on the rebound as Connor notched his second of the pre-season.

Edmonton bounced back on their next power play late in the first as Puljujarvi tipped a long Draisaitl shot past Jets netminder Comrie.

After several quality stops by Koskinen, the Oilers surged ahead 3-1 with goals just over two minutes apart.

With seven minutes left in the second period, Shore tipped home a Brendan Perlini shot, which was followed up by Puljujarvi scoring his second of the game and third in exhibition on a booming slap shot.

The Jets are back at it on Sunday as they head to Vancouver to face the Canucks. The Oilers remain home to welcome the Calgary Flames on Monday.

This report by The Canadian Press was first published Oct. 2, 2021.

Russia's claimed seizure of a Mariupol steel plant that became a symbol of Ukrainian tenacity gives Russian President Vladimir Putin a sorely needed victory in the war he began, capping a nearly three-month siege that left the city in ruins and more than 20,000 residents feared dead.

Trudeau says government will do 'everything we can' to avoid U.S.-style formula shortage

A national substance use research organization is warning about a new type of opioid that is increasingly being found in Canada's unregulated drug supply.