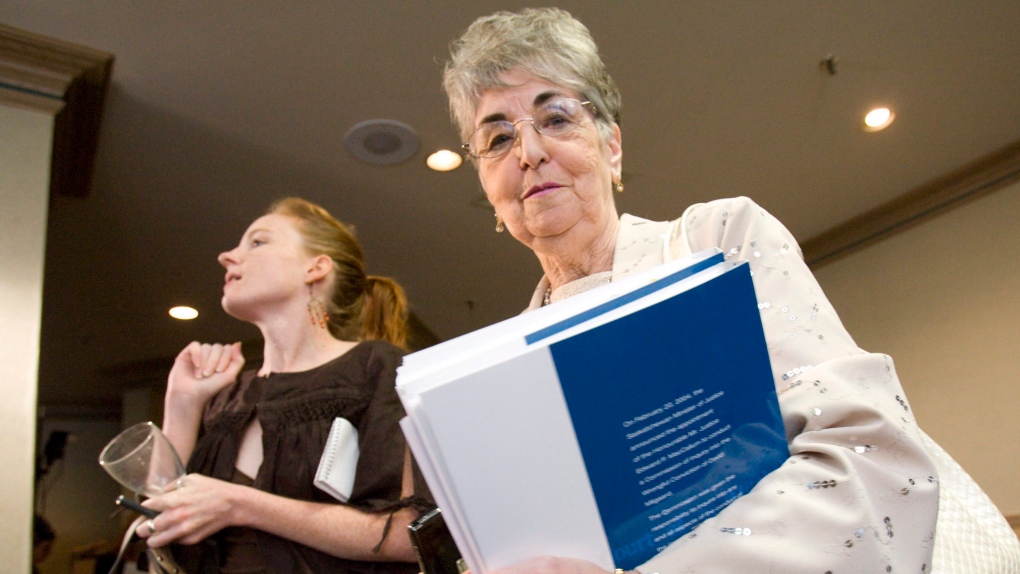 Joyce Milgaard addresses media at the release of the Report of the Commission of Inquiry into the Wrongful Conviction of David Milgaard in Saskatoon, Sask., Friday, Sept. 26, 2008. (Geoff Howe / THE CANADIAN PRESS)

TORONTO -- Joyce Milgaard, who spent decades fighting tirelessly for the exoneration of her wrongfully convicted son, David Milgaard, has died after a lengthy illness, his brother said on Sunday.

Milgaard, 89, a mother of four, died in a care home in Winnipeg on Saturday, Chris Milgaard told The Canadian Press from Regina.

"My mom didn't totally like it in the care home because she wasn't quite as free to do things as she wanted but she's doing what she wants now," he said. "She really couldn't be stopped."

Her death was apparently unrelated to the COVID-19 epidemic.

Joyce Milgaard became a relentless advocate after her 16-year-old son was charged with the rape and first-degree murder of nursing aide Gail Miller, 20, in Saskatoon in 1969. Despite his protestations of innocence, he would spend 23 years in prison before being released in 1992.

His mother spent several more years fighting for his complete exoneration -- which occurred when DNA evidence finally excluded him as Miller's killer in 1997 -- and to see him compensated. The Saskatchewan government gave him $10 million.

"You could knock her down a million times but she would get up a-million-and-one times," Edwards said. "She could be bloodied but she could not be beaten."

Besides her two sons, Milgaard leaves behind two daughters, Susan and Maureen, who were at her bedside when she died. A memorial was still being planned.

David Milgaard, 67, who lives in Alberta, has always credited his mother's efforts for his freedom, saying he would otherwise have been left to rot in prison. She would say she never doubted her son's innocence.

I knew David was no angel and that he had been in plenty of trouble," Milgaard would write of her son. "But nothing involving violence."

Her son, she said, had a "typically Canadian faith in the system" and trusted police would find Miller's real killer. "He couldn't have been more wrong."

Milgaard spent most of her waking hours reinvestigating the case using skills she learned in her teens as a newspaper switchboard operator. She sold her car and home and put up a $10,000 reward for information that could help free her son. She finally caught the ear of then-prime minister Brian Mulroney.

Ultimately, police would charge serial rapist Larry Fisher with Miller's killing. Fisher was convicted in 1999 of first-degree murder and sentenced to life in prison, where he died in 2015.

An inquiry concluded in 2008 that Milgaard's public crusade on her son's behalf sparked resentment among police and prosecutors and became an obstacle in having his case reopened. She called those findings hurtful.

"I did what I felt was necessary at the time and we got the result that we wanted, which is David free," Milgaard said at the time.

Even after winning the battle to clear his name, Milgaard continued fighting for the cause of justice and the wrongfully convicted. She became a familiar speaker at schools and universities.

"She made the justice system better," Edwards said.

He did not respond immediately Sunday to a request to talk about his mother.