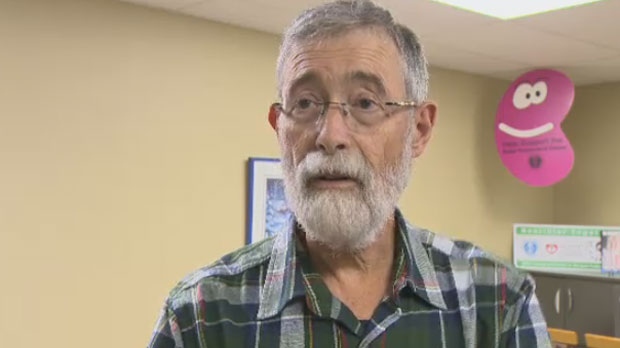 By sharing his story, Perras and the Kidney Foundation of Canada hope to encourage more people to sign up to be an organ donor.

Adrien Perras has beaten the odds by surviving 40 years after receiving a kidney transplant in 1976.

The Kidney Foundation of Canada said the average lifespan for a kidney transplant is 25 years. Only one per cent of transplant patients live as long as Perras.

At 21, Perras was a university student when he started feeling lethargic all the time.

“I’d sit down to study and fall asleep for two hours,” he said.

Doctors at the Health Sciences Centre ran some tests and booked an appointment a few days later. Perras missed the appointment, and a few hours later received a call, telling him to get down to the hospital immediately.

Doctors told him his kidneys were “shot,” Perras said. When he got the news, Perras said he almost couldn’t believe it.

“You almost want to call BS on it,” he said.

Perras chokes up when he recounts telling his mother about the diagnosis.

“That was tough, cause I was her oldest son and she just had so many hopes for (me).”

A kidney donor couldn’t be found immediately, so Perras started preparing to go on dialysis while his name was put on a waiting list. However, only a few days before he was set to start dialysis, Perras got the call that a donor had been found.

“It just blew me away,” he said. “Fortunate doesn’t come into it. It’s almost miraculous, let’s use that word.”

Perras’ kidney came from someone who died. Manitoba has the longest median wait time in Canada for a deceased kidney donation, at 4.8 years compared to 3.9 years for Canada.

Since he received the donation, Perras has led an active lifestyle, working out three days a week, as well as cross-country skiing, curling, kayaking, hiking, skating, rock climbing, ice climbing, and biking.

He attributes his longevity to keeping active.

“Whatever you do, don’t sit on the couch with the remote or play on your phone.”

People can sign up to donate their organs at www.signupforlife.ca.

- With files from Shelden Rogers