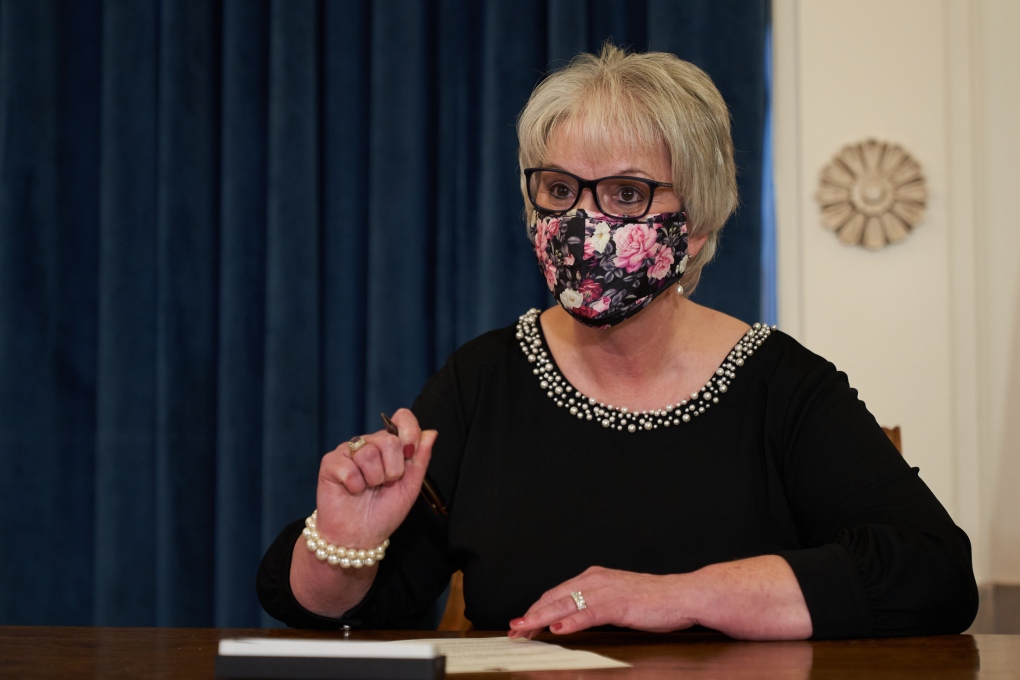 Eileen Clarke, Minister of Municipal Relations, is sworn in at the Manitoba Legislative Building in Winnipeg, Manitoba, Tuesday January 18, 2022. THE CANADIAN PRESS/David Lipnowski

On Tuesday, Stefanson unveiled her new cabinet at the Manitoba Legislative Building, and will then be available to answer the media’s questions at 2:30 p.m. CTV Winnipeg is live-streaming the event.

Eileen Clarke is returning to cabinet as Minister of Municipal Relations – a ministry she had held previously. In July, Clarke had stepped down as Indigenous and Northern Affairs Minister under former Premier Brian Pallister's government following controversial comments Pallister had made about colonial settlers.

"I have no regrets to this day for my resignation. I did it for all the right reasons," Clarke said following the swearing-in ceremony.

Clarke said, at the time of her resignation she did not anticipate to be asked to join cabinet again.

"For the premier to invite me back into Cabinet was really a great day," she said, adding she has a good relationship with Stefanson.

Among the other changes to cabinet, Minister Cliff Cullen has been replaced by Wayne Ewasko as Minister of Education and Early Childhood Learning. Cullen will now take on the role of Deputy Premier and Minister of Economic Development, Investment, and Trade.

With the cabinet shuffle, Stefanson announced a change to the former Health and Seniors Care portfolio, along with the former portfolio for Mental Health, Wellness and Recovery – two departments previously led by Audrey Gordon.

As of Tuesday, Gordon will now lead what the province is calling a "reframed health portfolio" as Minister of Health. The province said Gordon will be mandated to strengthen resources to manage COVID-19 and work with the Surgical and Diagnostic Task Force to clear the backlogs.

Assiniboia MLA Scott Johnston is joining cabinet as the minister for the new Seniors and Long-term Care department. The province said Johnston will focus on implementing recommendations of the Stevenson Review.

Sarah Guillemard, the MLA for Fort Richmond, will serve as minister of mental health and community wellness – a ministry focused on addressing and treating addictions and mental health challenges exacerbated by the pandemic.

Johnston was not the only new face to be added to Stefanson's cabinet on Tuesday.

Doyle Piwniuk – the MLA for Turtle Mountain – was sworn in as as Minister of Transportation and Infrastructure, and Andrew Smith – the MLA for Lagimodiere – is taking on the role of minister of sport, culture and heritage, and minister responsible for Travel Manitoba and the Manitoba Centennial Centre Corporation (MCCC).

APPOINTMENT OF A LABOUR MINISTER 'LONG PAST DUE' SAYS MFL

The Manitoba Federation of Labour (MFL) said an appointment of a minister of labour is 'long past due' saying Manitoba has not had a labour minister in nearly six years.

"We are glad to finally have someone to work with on important issues that matter to working people in our province. However, today's appointment is the bare minimum," said MFL President Kevin Rebeck in a statement.

"What this government does to support working people over the next few months will matter most."

The appointment is also being welcomed by Kyle Ross, the president of the Manitoba Government and General Employees' Union.

"Appointing a Labour Minister is a good first step in showing front line workers, and all Manitobans, that the government is committed to resetting the relationship with workers in Manitoba," Ross said in a statement.

"The new Minister will know there is a lot of work to do to restore confidence in this government after years of cuts, privatization, wage freezes, strikes, and contracts that have been ignored for years."

The other changes to cabinet include

TWO MINISTERS GET THE BOOT

The shuffle did see two ministers get the boot from cabinet.