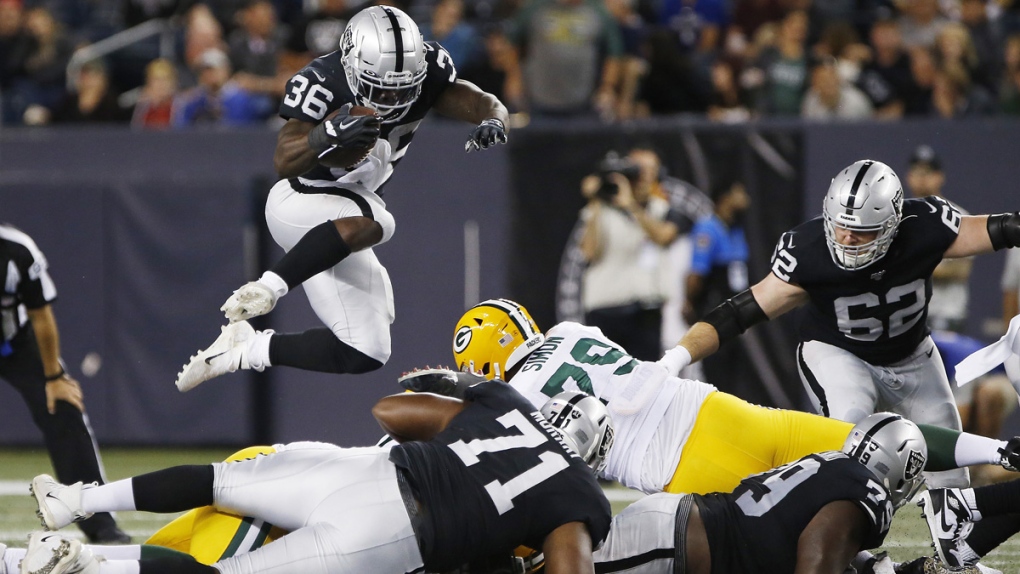 Oakland Raiders' James Butler (36) leaps for yards against the Green Bay Packers during the second half of NFL pre-season action in Winnipeg Thursday, August 22, 2019. THE CANADIAN PRESS/John Woods

WINNIPEG -- The premier of Manitoba says "there's a lot of disappointment" in the province after a controversial NFL pre-season game at IG Field on Thursday night.

During a campaign stop Friday, Progressive Conservative leader Brian Pallister was asked about the Oakland Raiders-Green Bay Packers game, which was played on a shortened field because of concerns about the turf in the end zones.

"I would remind people to remember that the organizers tried to do something that hadn't been done before so let's give them respect and credit for trying," Pallister said. "I would rather see a person try and fail then see somebody who had never tried. Yeah, it didn't work out the way they wanted, and I'm sympathetic to the fans who felt disappointed obviously but not being a provincial responsibility I'll limit my comments to that."

Manitoba NDP leader Wab Kinew said he noticed plenty of fans of both teams downtown, but acknowledged there were issues with the event.

"I think there was a lot of buzz, it's just that I guess because of a few fumbles here and there with the field and a lot of fans being disappointed (Packers star quarterback) Aaron Rodgers didn't start, this game didn't end up being the touchdown it could have been," he said.

Just before the game started, the NFL announced the field would be shortened to 80 from 100 yards. The league also decided to eliminate kickoffs.

Minutes before the opening play, the Packers announced they would not dress 33 players, including Rodgers. The Raiders also held out most of their starters, including quarterback Derek Carr and marquee receiver Antonio Brown, for the Week 3 pre-season contest. Week 3 games traditionally see teams give their starters the most time in the pre-season.

Announced attendance was 21,992 at 33,000-seat IG Field. Ticket prices, much higher than for most other NFL pre-season games, were highlighted in media reports in the leadup to the game.

The Raiders were the home team. Canadian-based On Ice Entertainment Ltd. staged the game and was the promoter.

When asked if he was concerned if the game could have an impact on future events in Manitoba, Pallister said, "I hope it reminds people to support the Bombers, support the Jets, support the Goldeyes, support every sports franchise we have got in the city and province and make sure that our young athletes are encouraged, nurtured.

"That we build our sports community up here within Manitoba because that's our future as far as I'm concerned is investing in young Manitoba athletes."

Thursday's game was the first NFL contest in Canada since the Buffalo Bills completed a series of games in Toronto in 2013.

-- With files from Kelly Geraldine Malone and Steve Lambert.