WINNIPEG -- It doesn't take a master sleuth to figure out why people are braving the winter prairie winds and snow to flock to a field south of Winnipeg.

Owner Clint Masse says the sections of wall are two feet wide and more than six feet tall. They appear almost as thick and dense as the walls surrounding medieval castles.

"It's crazy," Masse admits with a laugh.

"I think every eight foot of wall we needed about four cubic yards of snow packed."

Even when the cold wind howls outside, Masse said the height and density of the walls keep people warm as they feel their way through.

Dressed in their winter finest -- snow pants, boots, toques and mittens -- around 20,000 people made their way down the paths, into dead ends and finally out the exit of the maze during the first year. 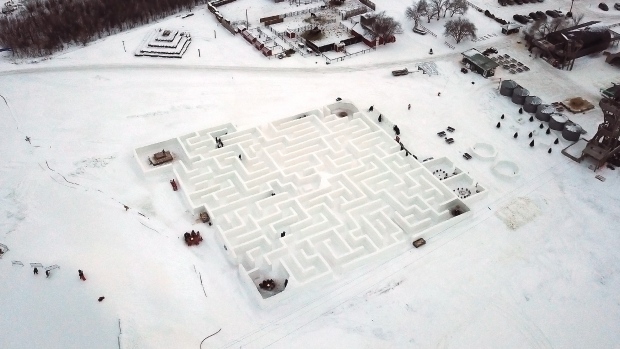 The maze is built on top of the Masse family's other big summer attraction -- A Maze in Corn. The giant corn maze, hay bale pyramid and petting zoo have been running on the family's property for more than 20 years. They also have added zip lines and a haunted forest. 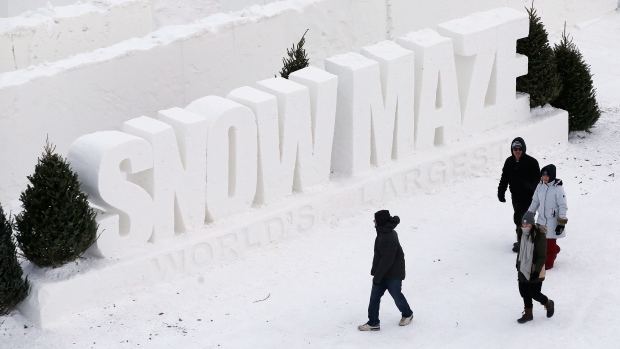 In Manitoba, people are always looking for a way to get outside while staying warm once the temperatures drop, Masse said. A colleague told him about a different snow maze in Thunder Bay and he figured, with a corn maze already established, it would be a natural transition.

Masse decided if he was going to do it, he'd do it big. Before the snow began to fall, he contacted Guinness.

Things weren't quite as easy as he initially planned, Masse added with a hearty chuckle, but there was no turning back.

First the maze was designed. Then, Masse said, once the snow came crews used concrete-forming tools, tractors and a snow maker to start forming the walls.

"The first day you know we did probably 40 feet of wall. I thought that was pretty good," Masse said. "But then 40 feet of wall means that we are here until about June."

Their techniques were refined, they moved more quickly and crews worked 10-hour days until, finally, the record-breaking masterpiece was made. It was proclaimed as the largest snow maze by Guinness World Records after being measured Feb. 10, 2019.

Masse said this year they were more prepared, and brought on some extra employees, so the maze came up a lot faster and there were no concerns whether they'd be ready for opening day at the start of January. 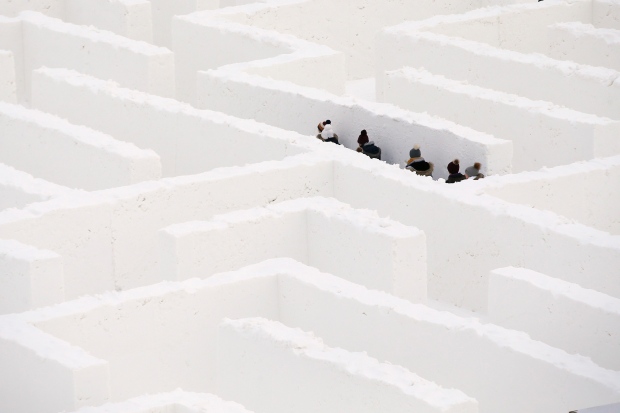 People focused solely on getting to the end take about 20 to 30 minutes to exit the maze. Those who get turned about or are just having a lot of fun inside will be in there a lot longer.

This year Masse also added a large snow hill for sliding down and a gigantic igloo where people can get coffee, hot chocolate and hot toddies.

Masse said they've had visitors from all over Canada and the United States who have come to the area specifically for the magic of being in a snow maze.

"I like the look on people's faces because they are just like, 'Wow!' Their eyes are wide open, and they are like 'Holy smokes. It's crazy,"' he said.

Sharing the family's love for epic mazes is important, Masse said, but what they truly appreciate is how it's become a point of community pride. He runs it with his wife and children, his neighbour is his bookkeeper, and it's not uncommon to see friends stopping by to help during the season.

"If you drop a pin, within a mile, everyone's kids have worked on it."

Masse said it's not just his family's record-holding maze, it's Manitoba's.

Finding your way through the world's largest snow maze