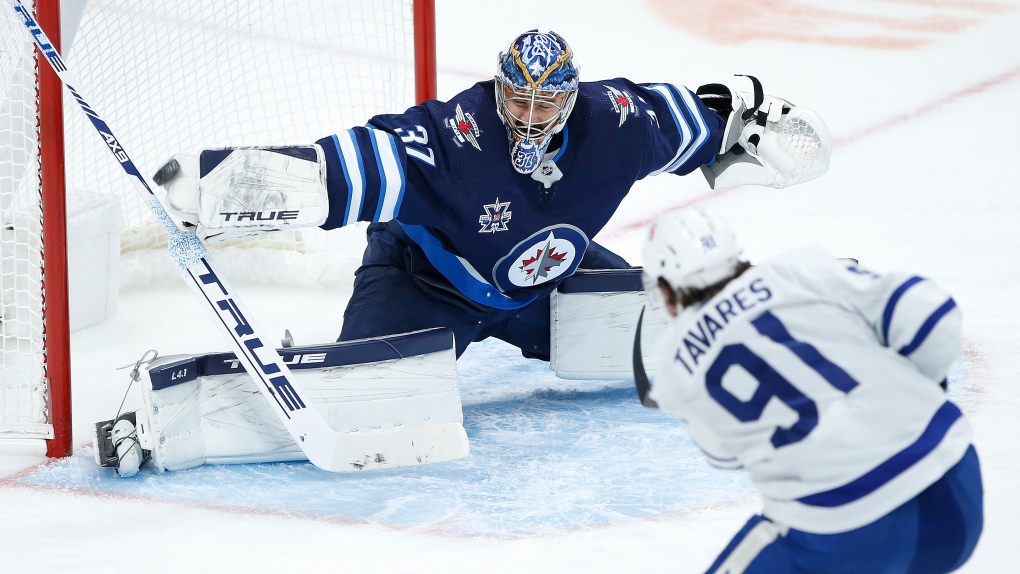 The Maple Leafs insisted this year would be different.

After last summer's disappointment in the post-season bubble, which came on the heels of three straight first-round exits, they made a commitment to be harder and more competitive in challenging moments.

With the playoffs fast approaching, Toronto served notice the last two games the team is ramping up to face what's to come.

Mitch Marner scored the 100th goal of his NHL career on a night where 41-year-old Joe Thornton set a franchise record and also displayed anger and emotion not seen since he signed in free agency as the Leafs defeated the Winnipeg Jets 4-1 on Saturday.

Thornton became the oldest player to ever score in a Toronto jersey, but it was his feud with Nikolaj Ehlers in the third period following a slash by the Jets sniper that put an accent on a two-game sweep in Winnipeg where tempers were running high and every shift was a battle.

"Just two good teams going at it," Thornton said. "Neither team wants to back down."

The Leafs forward went after Ehlers on a couple occasions in the third, earning himself a call for cross-checking before the pair were assessed off-setting minors and the conversation continued in the penalty box -- with Thornton doing most of the talking.

"I think NHL player safety's going to look at that slash and not be happy," Thornton said. "That's what started everything."

John Tavares and Alexander Kerfoot, into an empty net, also scored for Toronto (30-13-5). Jack Campbell stopped 25 shots as the Leafs stretched their lead atop the North Division to eight points on the second-place Jets.

Toronto head coach Sheldon Keefe said the physical, engaged play Thornton, who snapped a 27-game goal drought in the opening period, has shown in recent weeks is a great sign for his group with the regular season winding down.

"It's a different time of year, we're really gearing up here as a group," said Keefe, whose team lost in five games to Columbus in last summer's qualifying round. "(Thornton's) bringing more fire competitively on the ice, more fire in the dressing room, more fire on the bench, and just striking such a nice balance between energy and positivity with a level of seriousness and competitiveness.

Ehlers replied for Winnipeg (28-16-3), which has lost three straight for the first time this season.

"This is going to be a big character build for us," said goaltender Connor Hellebuyck, who finished with 33 saves. "You never know how much adversity you go through, and we seem to keep going through little spurts of adversity.

"Hopefully we come back from this stronger."

Toronto improved to 6-3-0 against the Jets, including a perfect 4-0-0 record in Winnipeg. The Leafs have won two straight after dropping five in a row (0-3-2).

"We didn't lay back," Marner said. "Everyone was ready for the challenge."

While Thornton's fire grabbed most of the attention, fellow free-agent signing Wayne Simmonds was also in the middle of the fray for a lot of this mini-series for a club that has had its toughness questioned more than a few times the last number of seasons.

"We've just talked about the competitiveness from Day 1," Tavares said. "Sheldon made that a big focus for us coming into the season, and throughout the season just how establishing physicality and competitiveness has got to be a big part of who we are.

"We've got some people who lead the way for us there and set a great example."

The home side was without centre Adam Lowry after he took a hit up high from Leafs winger Alex Galchenyuk in Toronto's 5-3 victory Thursday at Bell MTS Place. Winnipeg head coach Paul Maurice said before the game Lowry has yet to be diagnosed with a concussion, but was held out of the lineup as a precaution.

After allowing two goals inside the first 1:18 on Thursday, the Jets opened the scoring 39 seconds into Saturday's opening period on the game's first shot when Ehlers backhanded his 21st goal of the season past Campbell.

The Leafs responded at 4:04 when Thornton, who had a goal wiped off the ledger Thursday when it was ruled Jason Spezza tipped his effort past Hellebuyck, collected the puck off the end boards and scored his fourth.

The visitors grabbed the lead at 11:40 when Jake Muzzin's dump-in off the glass hit one of the stanchions and ricocheted in front to Marner, who was quickest to the loose puck to score his 17th of the campaign and the 100th overall since entering the league in 2016.

Toronto defenceman Rasmus Sandin then clocked Blake Wheeler -- playing in his second game after missing six with a concussion -- on a reverse hit late in the period, but Winnipeg's captain returned for the start of the second.

Tavares made it 3-1 with the teams playing 4 on 4 at 7:07 of the middle period when he fired his 17th upstairs on Hellebuyck, who allowed three goals on six shots before getting the early hook Thursday, as the Leafs captain extended his point streak to eight games.

The Jets killed two penalties to begin the third before starting to press, but Campbell was there to make nice saves on both Paul Stastny and Mark Scheifele, who was benched for the final 14 minutes of the second following the Tavares goal.

Hellebuyck made a nice stop on a backhand by NHL goal leader Auston Matthews midway through the period, but the Jets wouldn't get any closer as Campbell and the Leafs survived a late Winnipeg power play -- when an incandescent Thornton went after Ehlers -- that included a Neal Pionk post before Kerfoot iced it into an empty net.

"Really liked the contribution all throughout the lineup," Keefe said. "Four lines, six defencemen all contributing in various ways for whatever the game called for.

"Just a solid team win. It's what it takes when it counts the most."

The Jets open a two-game series Monday at Bell MTS Place with the third-place Edmonton Oilers, who are a point back with two games in hand, while the Leafs visit the Montreal Canadiens on Wednesday. The Leafs and Jets wrap up their regular-season schedules May 14 back in Winnipeg.

This report by The Canadian Press was first published April 24, 2021.