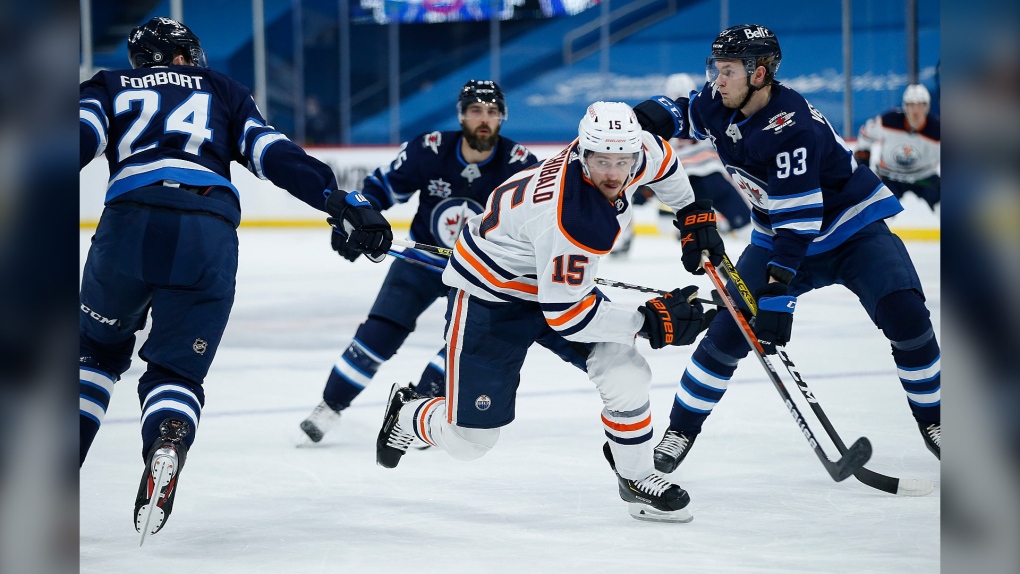 WINNIPEG -- Ryan Nugent-Hopkins says the Edmonton Oilers are peaking at the perfect time this season.

After downing the Winnipeg Jets 3-1 on Wednesday, the Oilers (29-26-2) have points from eight of 10 games in April and are finding their form as they push toward the playoffs.

"We had a bit of a shaky start to this season. But we just stuck with it, we didn't get down on ourselves and ever since then, we've kind of been rolling," Nugent-Hopkins said. "Things are going well for us right now but we can't take our foot off the gas here. We've got to keep pushing and striving to get better every day."

A potent power play was key to Edmonton's success Wednesday. The Oilers were 2 for 3 with the man advantage. Winnipeg was 0 for 1.

The second power-play goal of the night came 6:20 into the second after Blake Wheeler was handed a double-minor for a high stick that left Ethan Bear with a cut over his lip.

Nugent-Hopkins wasted no time, riffling a shot in past the far post just 12 seconds into the man advantage to make it 2-1.

The Oilers forward has 14 goals on the season, including five against the Jets. He also notched an assist on Wednesday.

"Obviously special teams is huge," Nugent-Hopkins said. "The power play, sometimes that's the way you win games and tonight it got the job done for us."

Tyson Barrie also had a goal and an assist for Edmonton, while Leon Draisaitl buried an empty-net strike with nine seconds left on the game clock. Oilers captain Connor McDavid recorded assists on all three goals.

Oilers netminder Mikko Koskinen posted 29 saves to collect his 11th win of the season. Connor Hellebuyck stopped 24-of-26 for the Jets.

It was a hard-fought game where a couple of power-play goals made all the difference, said Edmonton coach Dave Tippett.

"It was just kind of a slug fest after that, just trying to find space out there," he said. "We knew they were going to play hard. They're a desperate team. I like the way our guys kind of hung in the game."

Wheeler scored the lone goal for Winnipeg (27-19-3), temporarily drawing the Jets even 4:29 into the second period.

Andrew Copp forced Edmonton defenceman Dmitry Kulikov to turn over the puck along the end boards and Copp shipped the puck out to Wheeler in the right face-off circle. The Jets captain blasted a shot past Koskinen for his 11th of the season.

Wheeler missed six games earlier this month with a concussion and had not scored since March 26.

It's been a tough stretch for the Jets, with Wednesday's loss extending Winnipeg's longest losing skid of the season to five games.

"It was a step in the right direction tonight, but nothing's going our way," Wheeler said of the result.

Despite the slump, the Jets remain solidly in the hunt for a playoff spot, sitting third in the all-Canadian North Division, three points behind the Oilers.

Hellebuyck believes Winnipeg will turn things around and said there were bright spots in Wednesday's loss.

"But we can't settle for losing," he said. "We're going to snap out of this and it's going to be big. And we're going to carry that momentum. So it's just a matter of time."

Busting the team's slump is no different than working with an individual player who isn't scoring, said Jets coach Paul Maurice.

The group needs to look at where they have chances and figure out what they can do better, he said.

After being trounced 6-1 by the Oilers on Monday, what the Jets wanted to do better was limit rush chances. Maurice said they largely accomplished that on Wednesday.

"We did what we set out to do here tonight and we've got to build on that," he said. "If you can't get the win in the game, you've got to leave the rink feeling like you're moving in the right direction. I think we did that here today."

It's a quick turnaround for the Oilers, who'll be in Calgary Thursday to face the Flames. The Jets will visit the Canadiens in Montreal on Friday.

This report by The Canadian Press was first published April 28, 2021.