People who occupy public spaces in Winnipeg should be allowed to stay briefly: poll

People who occupy public spaces in Winnipeg should be allowed to stay briefly: poll

More than one-third of Winnipeggers believe people who have occupied public spaces in the city should be allowed to stay there briefly, according to a recent poll.

A poll, commissioned by Probe Research for CTV Winnipeg and the Winnipeg Free Press, shows 36 per cent of people surveyed last month believe that people occupying public spaces, such as parks and the Manitoba Legislative grounds, should be allowed to remain there for a period of time.

The poll also showed 30 per cent of those surveyed said it depends on the group when it comes to what happens, while 25 per cent believe those occupying the spaces should be removed immediately.

Seven per cent of people responding said people should be allowed to stay indefinitely, while two per cent had no answer.

Support for remaining for a certain amount of time had fairly equal support across supporters of all three political parties. It was highest for Manitoba Liberal voters at 40 per cent, followed by 38 per cent for the Progressive Conservatives and 33 per cent for the NDP.

Supporters of the Progressive Conservatives were more likely to want the groups evicted immediately, with the poll showing 41 per cent, while 40 per cent of NDP supporters who responded said it would depend on the group for what decision would be made. 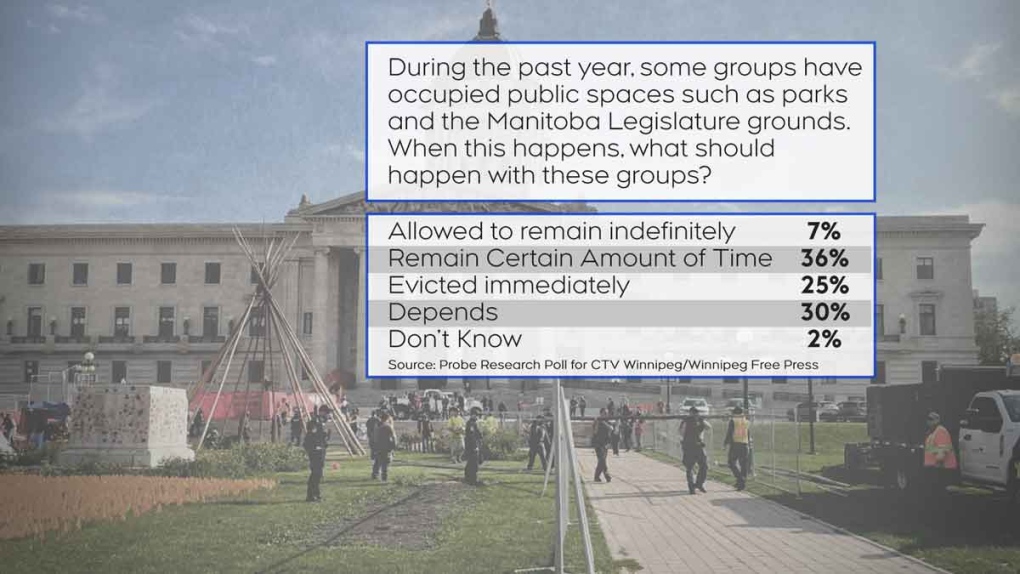 According to Probe Research, 600 adults in Winnipeg were surveyed between Sept. 8 and 18.

“With a sample of 600, one can say with 95 per cent certainty that the results are within ± 4.0 percentage points of what they would have been if the entire adult population of Winnipeg had been surveyed. The margin of error is higher within each of the survey’s population subgroups,” Probe said.

National Revenue Minister Diane Lebouthillier is facing calls from Conservatives to apologize for suggesting that Tuesday's auditor general report indicating that billions of dollars in COVID-19 benefits went to those who were ineligible was influenced by political pressure.

There have never been so many renters in Canada, RBC report says

Royal Bank of Canada economists say the country has reached a record number of renters as the number of people renting has increased at three times the rate of homeowners in the past decade.

Putin calls nuclear weapons a tool of deterrence in Ukraine

Russian President Vladimir Putin on Wednesday hailed the annexation of Ukrainian territories as a major achievement and said his country's nuclear weapons serve as a tool of deterrence in the war that the Kremlin calls a 'special military operation.'

Polygamous leader had 20 wives, many of them minors: FBI

The leader of a small polygamous group near the Arizona-Utah border had taken at least 20 wives, most of them minors, and punished followers who did not treat him as a prophet, newly filed federal court documents allege.

Bank of Canada raises key interest rate to 4.25 per cent, its highest since 2008

The Bank of Canada has raised its overnight rate by 50 basis points to 4.25 per cent, marking its seventh rate hike in nine months. The last time the bank’s policy rate was this high was in January 2008.