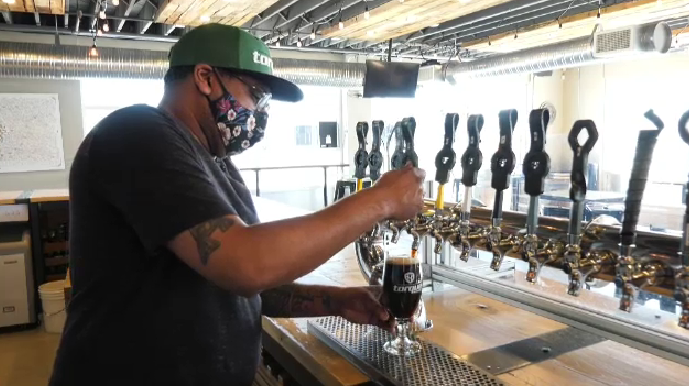 WINNIPEG -- New restrictions for bars are being welcomed by business owners but they also come with a set of challenges that are proving to be difficult.

Under the province's latest loosening of health restrictions, lounges and brewpubs are allowed to reopen but can only serve booze if the customer also orders food.

Torque Brewery in Winnipeg was happy to be able to reopen on Friday.

"Honestly, I can't wait to have people in here, socially distanced obviously, being able to pour beers off the tap and having that excitement and vibe back in the taproom which taken four years to develop," said Raj Maniar, sales manager at Torque Brewery.

But, with no kitchen, the company was forced to adapt and outsource food for its customers.

"It was a little confusing at first, but then we talked to our LGCA rep and they gave us our guidelines that we can reopen as long as people eat some food," said Maniar.

The brewery is bringing in pizza and samosas to meet the food requirements.

The biggest challenge, according to Maniar, was having only two day's notice of being able to reopen.

Over in Virden, Man., The Alexandra Hotel is also happy to be able to serve customers again but is facing similar challenges.

Gord Halowaty, the owner of the family-run hotel, said reopening has been tough.

"There's no clarification on what a meal actually is, so that was a difficulty," said Halowaty.

In an email to CTV News, Halowaty's daughter Meagan said the food rule is especially challenging for small-town establishments.

"If you know your small-town bar, you know that many are a favourite place to grab a quick drink after work before heading home for dinner. Now, you have to order dinner if you want to drink."

"Many of these rural hotels/bars lack the staffing and infrastructure to serve a full menu or at least one that would convince people to skip out on their home meals to come for a drink to the bar."

Halowaty said a few customers left after being told they had to order food but is thankful to see his regulars return.

Even with the new restrictions the hotel isn't making money.

"Every day we open the doors, we are losing money," said Halowaty.

The hotel has to open, though, or else it would have to pay a loss wages fee to the MBLL for its VLTs not being on.