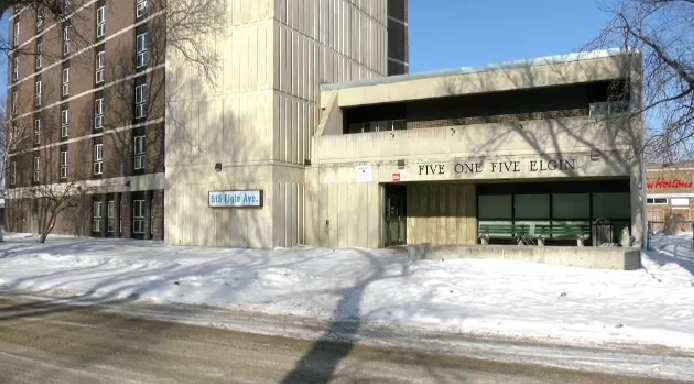 WINNIPEG -- 515 Elgin Avenue, a 55+ Manitoba Housing complex is struggling to rid their building of some uninvited guests, and safety is becoming a concern for the tenants.

Shaie, who didn’t want to use her last name out of fear of her family being identified, has grandparents who live in the building. She said the tenants are being treated ungraciously.

Shaie said the building currently has a large number of people squatting in the hallways, using drugs, defecating in the stairwells, and causing property damage.

“I know lots of elderly people that live there, they all know who I am, and it’s gotten to a point where I’m not only fearing for the safety of my own relatives in the building, but everyone else’s,” said Shaie.

But 515 Elgin isn’t the only 55+ building in the area with safety concerns. In December, residents of 425 Elgin Avenue were experiencing similar issues regarding trespassing, drug use, and safety in their building.

She said governments have a responsibility to provide supports and safety for seniors in the province.

MLA for Notre Dame, Malaya Marcelino said she met with her constituents at 515 Elgin Avenue last summer to discuss safety strategies. More security personnel and cameras on site were some of the recommendations made.

Marcelino said she brought those ideas to Manitoba Housing but little action has been taken.

“The issues continue. We haven’t seen the installation of these cameras that were promised yet, and we’re still waiting for 24/7 security,” said Marcelino.

In a statement to CTV News, a spokesperson for the Minister of Families said “It should be noted that while Manitoba Housing continues to address security issues at its properties, the number of security calls at Manitoba Housing buildings has dropped by 25 per cent over the past five years.”